MultiCam Tropic is the optimal camouflage pattern for tropical environments, where staying out of sight depends on how closely the predominant colours and shapes of your concealment system mimic those of the surrounding green and darkly lush vegetation.

What is Multicam Tropic?

MultiCam Tropic is a camouflage pattern developed as a variation of MultiCam for use in tropical environments.

Is MultiCam Tropic a digital pattern?

Yes. MultiCam Tropic—a variation of the original MultiCam pattern—is made with the help of computer digitisation.

What colours make up MultiCam Tropic?

Gear in either Ranger Green or the base version of MultiCam will work with your BDU in MultiCam Tropic. MultiCam overlaps and complements MultiCam Tropic, making both perform better if used together.

When was MultiCam Tropic introduced?

MultiCam Tropic was introduced in 2013 alongside MultiCam Arid, MultiCam Alpine, and MultiCam Black.

Why was MultiCam Tropic developed?

MultiCam Tropic was invented to complement base MultiCam’s lack of effectiveness in woodland and tropical environments. You can read more about the pattern’s effectiveness here. 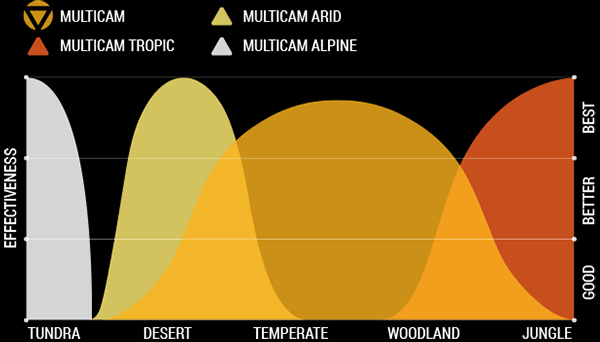 As shown in the image above, MultiCam Tropic extends regular MultiCam’s effectiveness and works optimally in tropic environments.

Currently, no units are listed as having made MultiCam Tropic their official camouflage pattern. However, the U.S. Special Forces use it in deployments to tropical regions.

Designed to meet the unique requirements of top-tier law enforcement and military units.

The official concealment system of the German army, Flecktarn camo employs the science of perceptual psychology to let you stay out of sight.

Works so well at tricking your brain into not seeing what's there that you'll have no confusion at all about choosing it for your next op in forests, grassy plains, mountain terrain, arid zones, villages, or cities.

Consists of a complex combination of small and large pixelated shapes in stalk grey, shadow brown, grass green, and hay brown that merge to create the illusion of shading and additional colour tones.

FIND OUT MORE
UP