Military Camouflage | What is It?

Military camouflage is as closely connected to tactical clothing as anything can be. But what exactly is “military” camouflage? What makes it special compared to others? More intel in this in-depth article.

Although the use of tactical gear and army uniforms can be traced all the way back to prehistoric times (depending on how willing you are to bend your standards), putting camouflage over it is surprisingly something that no one really thought to do until only fairly recent times—specifically, the the last century.

Let’s take a look now at military camouflage (or concealment, as it’s better known nowadays). It’s not like the camouflage you might wear in the civilian world as a hunter or as someone trying to be “tacticool.” But what is it that makes military camouflage “military?” And just how ingeniously different from civilian camouflage must it be to be effective on today’s battlefields.

What qualifies as military camouflage

We need first to make sure we’re on the same page when talking about military camouflage. We need a definition of what it actually is. Intuitively, you might define it as a means of visual deception. That’s true, but there’s more to it.

At its core, camouflage is a specific type of visual deception. It goes by the codename MILDEC, which basically means it’s a type of strategy employed by the military to gain advantages in one or multiple theatres of war. Interestingly, there are many deception methods just as viable as camouflage.

Stories of great military deceptions are many. Among the best known is the Trojan Horse gambit, in which ancient Greek soldiers hidden inside a giant wooden horse were able to overthrow the walled city of Troy when the unsuspecting defenders of the city wheeled the innocent-seeming horse inside their gates (read about it in the Iliad and Odyssey, which date back to between the ninth and sixth centuries, B.C.). 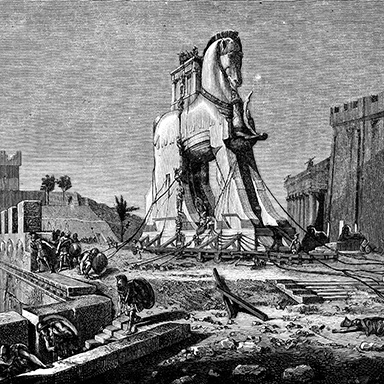 This concept was also enthusiastically discussed in The Art of War by ancient Chinese military strategist Sun Tzu, who described it in the context of ways to secure victory despite being outnumbered by the enemy.

Clearly, deception is embedded in military history. It is recognized as an effective means of shifting the tide of battle. Among the deception doctrines embraced by the U.S. military and its allies, three notable axioms and principles stand out.

Magruder's Principle. According to this principle, it is generally easier to induce a target to maintain a pre-existing belief than it is to deceive him for the purpose of changing his belief. This priciple was first employed during Operation Mincemeat, a British ploy to disguise the 1943 Allied invasion of Sicily.

Jones' Dilemma. A World War II-era British scientist determined that deception becomes more difficult as the number of channels of information available to the target increases, but also that the greater the number of controlled channels the greater the likelihood the deception will be believed. This was demonstrated during Operation Bodyguard ahead of D-Day—the allies pumped out tonnes of misleading intel to the Germans to convince them that the 6 June 1944 invasion would take place not at Normandy but far, far away up the French coast.

Avoid Windfalls. According to this principle, deceptive intel is less likely to be believed the easier it’s obtained.

You might be wondering what the current day operational MILDECs are. If so, take a look at the table below. 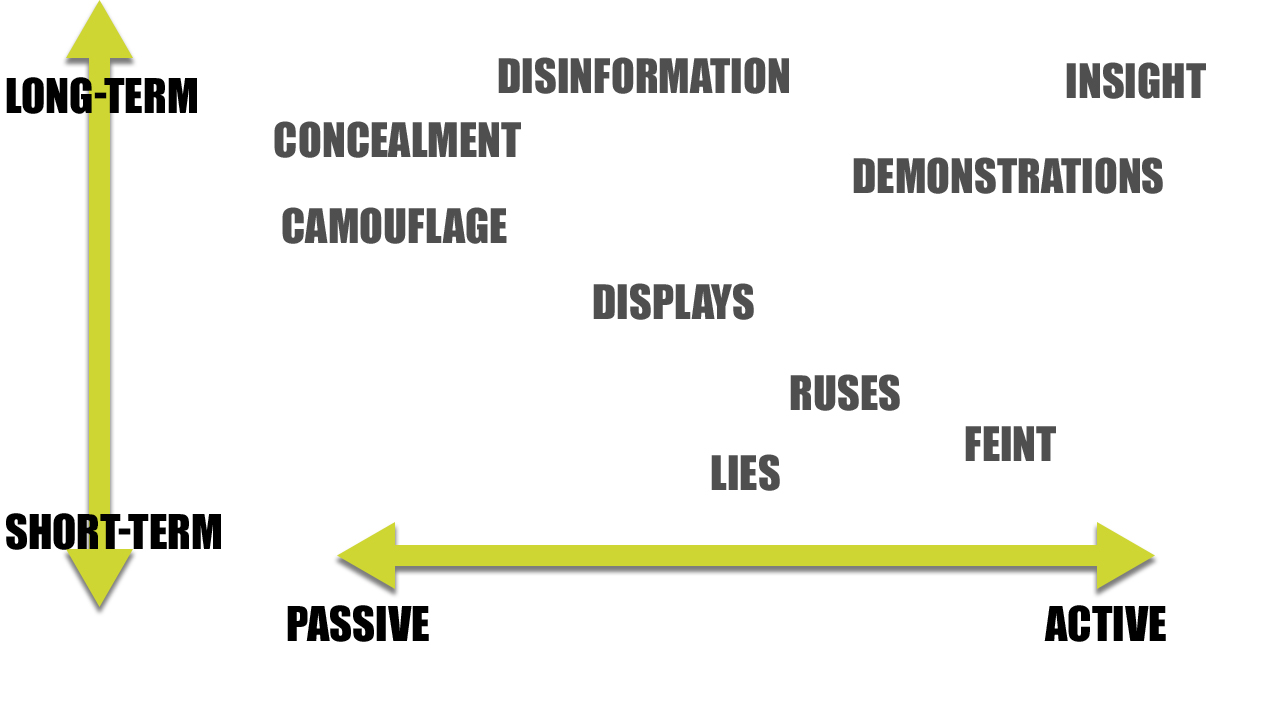 The table above shows two standout dimensions of deception. They are: length of the effect (vertical) and type of effort needed to implement the method (horisontal).

Most relevant to our discussion are concealment and camouflage. But how are they different from one another?

Concealment describes the hiding of an asset, such as equipment, by use of vegetation, tarps, and other means that prevent detection of any distinct shapes.

Camouflage refers to the use of different shapes, materials, colours, and illumination to prevent detection of an asset (such as a moving tank or an operator).

Briefly, camouflage is a subset of Military Deception or MILDEC focused on preventing detection by enemy forces.

In an earlier post, we discussed the different types of camouflages and touched on the differences between hunting patterns and those of military camouflage. In this post, we’re mainly focused on the visual differences and inherent properties of the patterns.

To recap, camouflages are purposely built for a specific environment or task. We can further split areas of effect into two subcategories, the first being visual.

Military camouflage is different from others in the sense that the theatre and detection methods change from natural to man-made, thus shifting from conventional patterns to the multispectral holy grail we all dream about. 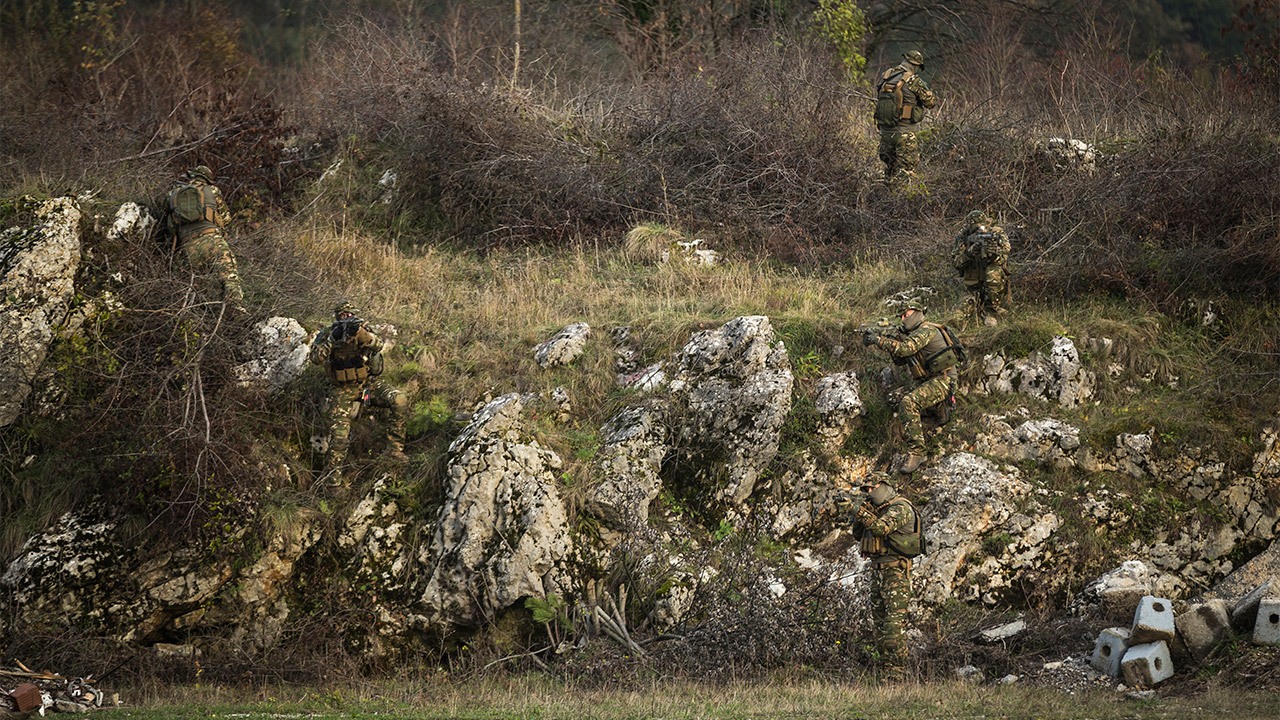 Many aspects of visual deception come into play with camouflage patterns. Most patterns tend to use more than one concept to maximise their effectiveness. The basic principles are:

When examining armed forces' camouflage patterns up close, you’ll probably first notice the shapes, colours, and size of the pattern. Those are the building blocks that make camouflage schemes what they are—be it digital camouflage, pixelated, lizard pattern, disruptive pattern, universal camouflage or any other.

Humans are hardwired to notice these basic blocks. The underlying principle of camouflage relies on this. So it makes sense to construct shapes in such a way.

Also, the visual spectrum of humans is extremely limited in relation to the whole electromagnetic spectrum. It ranges somewhere between 380nm and 750nm, but technically speaking visible light works no differently than heat radiating from a person’s body (thermal imaging). We’re just unable to detect that wavelength with our naked eye.

(We mentioned the visual principles of most common camouflages here and further broken down the digital patterns MultiCam in this post and compared it to Scorpion W2 here.)

The principle of “resemblance to the surroundings” is similar to the visual spectrum. However, here the detection methods change to a different specialized device.

We’re often asked whether a camouflage pattern we offer is “NIR.” This is a question that would seem to require only a simple “yes” or “no” answer. But dive a bit deeper and dissect the question more thoroughly and you’ll see there is more knowledge to be uncovered than meets the eye (pun intended).

Think back to the 750nm wavelength upper edge of the human red colour spectrum. The infra-red range begins there and increases to approximately the 1mm wavelength. In layman’s terms, this is a lower-energy electromagnetic wave invisible to the human eye.

NIR detection methods utilize the fabric’s (or, more specifically the coating/dye’s) reflection in a specific subset of light—in this case, the near-infrared spectrum. An extremely important thing to note here is that NIR properties are not tied to the camouflage pattern itself. A point proven by HyperStealth's brilliant article about the United States Phase VI Baseline patterns.

Using the same visual pattern (MARPAT) you can get dramatically different results with night vision optics.

Military equipment can have good NIR performance only if it emits less light in the near-infrared spectrum.

When you think about radar, you might get stuck on the idea that it’s only about the tracking of surface and air vehicles or maybe air force aerial reconnaissance. The modern battlefield (starting in the 20th century) and the introduction of MSTAR-type portable radar have made it imperative that fabrics evolve in ways that enable them to better prevent detection of troops.

The typical wavelengths of a radar are between 1mm-1m. (As an aside, the ability to detect an object depends on the wavelength being less than the dimensions of the object you are trying to detect; thus, larger wavelengths—for example, radio waves, which are in the 1m to 100,000km range—will not “interfere” with smaller objects like humans).

In 2007, Milliken and Co. published a patent under the name “radar camouflage fabric” which works by combining a base layer with a conductive layer that reduces the transmission of microwaves (specifically in the 6GHz to 8GHz band) used in long range radars by about 50 percent. The patent was approved in 2011. 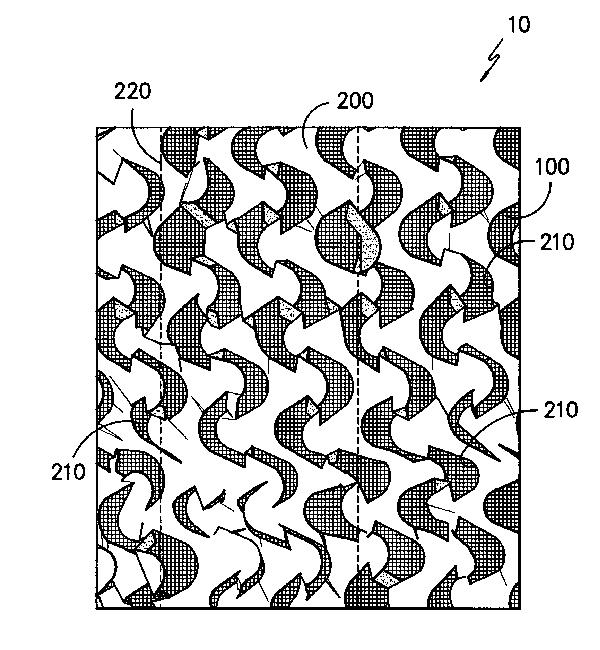 Arguably the pièce de résistance is true stealth technology is thermal-imaging concealment. Let’s do a mind experiment to demonstrate just how different a beast this is compared to the two previous aspects.

Say you’ve got a buddy who wants to explain to you why every other brand except UF PRO pants are the best on the market. Assume also you’re trying to hide from this guy because you know that what he’s going to say is ridiculous, since UF PRO pants are indeed the best. You’re hiding in complete darkness but you make the mistake of wearing a bright white shirt. This shirt will be instantly detectable if even the slightest amount of light shines on it. So you lay on the ground and cover yourself with a dark fleece fabric. As a result, your buddy is going to have a hard time spotting your white shirt—and will be denied his ability to spout that totally wrong opinion about UF PRO pants.

But now let’s change things up a bit. Your buddy does not give up easily. So he equips himself with a special see-through camera that lets him detect any white colour instantly in a 100m radius. Now, your buddy has no difficulty locating you. Of course, it was your misfortune to own but a single shirt and it happened to be white.

That’s exactly what thermal imaging is all about. You have an inherent property of temperature. Unavoidably, you radiate a detectable form of light (your body temperature). You would only be undetectable if you could lower your temperature to zero (disclaimer: you can’t).

It’s especially brilliant in the fact that it highlights different objects by detecting temperature changes between them.

A barrier that could soon be broken? In the video below you can watch the latest tech in this space and its effect on thermal imaging for military use.

There are also other alternatives like camoushield worth looking into, but none currently prove to be the last piece of the puzzle.

As shown in this post, there are a lot of hoops that camouflage has to jump through in order to be designated as military camouflage. Some of the hoops even require a major jump in technology to be able to keep up with the current standards.

The lesson of this post is to start thinking about modern camouflage patterns in a more abstract way than just plain patterns.

Also, no matter how good the current camouflages are, there’s always someone working just as hard on detecting them. That means there is no possible way to maintain the status quo in the modern era.

HUNTING VS MILITARY CAMOUFLAGE | WHAT IS THE DIFFERENCE