The immediately recognizable Flecktarn pattern is associated with the German military. Flecktarn’s effectiveness in the dense vegetation of European forests places it among the elite few camouflage patterns to have withstood the test of time. It has emerged as one of the most suitable patterns for European landscapes.

German 5FT Flecktarn is one of those camouflage patterns you immediately associate with a national army. Because of its long history, effectiveness, and popularity, you see it worn not only by German soldiers but also by a variety of people in everyday life who’ve embraced it as a fashion statement.

The pattern has come a long way since its introduction. And, in that time, it has managed to stand its ground while many other countries switched to new, more universal camouflage patterns such as Multicam and its derivatives.

Because of its relevance, widespread use, and, especially, its popularity, it is worth taking a closer look at the development of Flecktarn, the evolution of the pattern within the German Bundeswehr, and, last but not least, its influence on other countries’ camouflage systems.

Origins of the Flecktarn concept

As with most camouflage patterns, the roots of Flecktarn can be found in the concealment-technology research and development conducted before and during World War II. As already mentioned in the article on the history of camouflage, this period laid the groundwork for many concepts to come, including that of Flecktarn. And while you will find plenty of discussion among experts and camouflage enthusiasts on how big the period’s influence actually was, it is apparent to even the untrained eye that still today inspiration is drawn from WW2 patterns like “Plane Tree” or “M44 Pea Dot”. 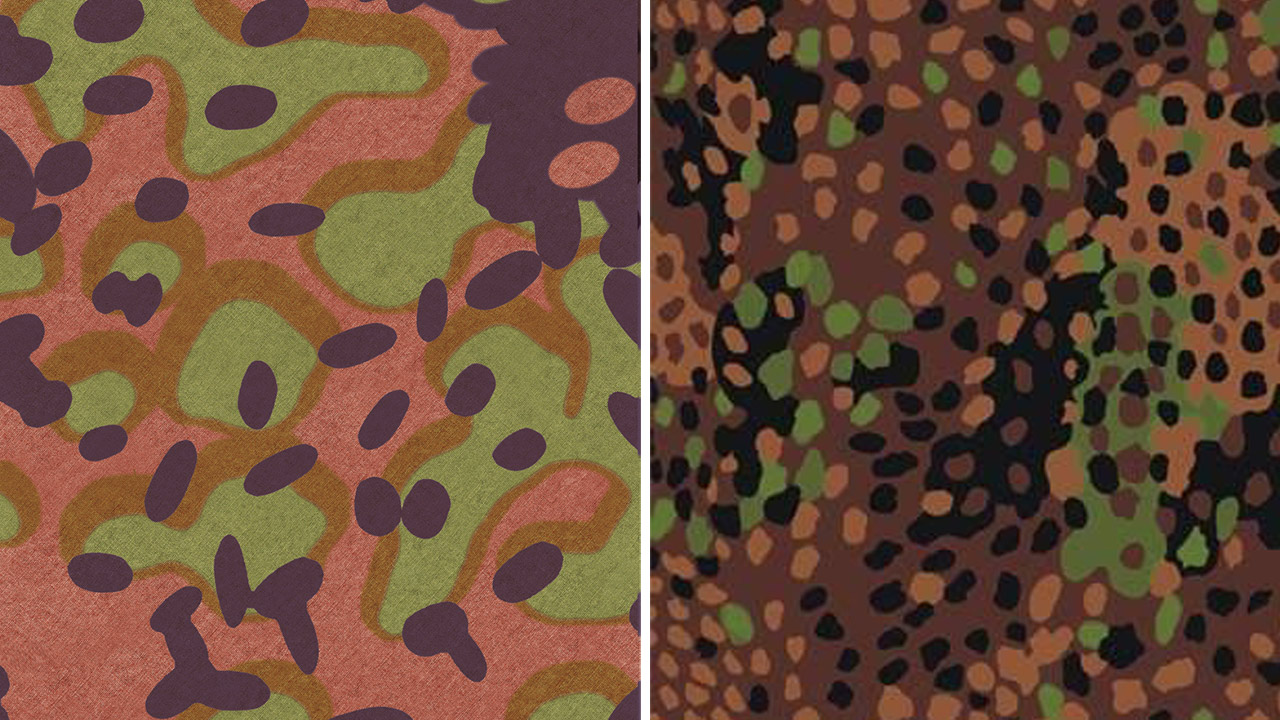 Both being “fleck” designs (the word means simply “spot” or “dot”), the round shapes used to disrupt the silhouette show similarities to the German designs by Otto Schick and his research unit. Obviously, they are not direct copies of Schick’s work. However, the principles and design concepts are the same.

First developed around 1936 in the Abteilung T (Department for Camouflage), Schick used the spot concept in several camouflage patterns for the SS (read more about that here). Building on these concepts, several countries started to develop their own camouflage patterns using differently coloured spots to conceal and disrupt the silhouettes of their soldiers.

In those instances where nothing new was fielded, German WW2 surplus camouflage material was used. In fact, more than 10 countries relied either on war surplus material or on manufactured direct copies. This can be seen not only as a pragmatic approach necessitated by the economic situation that existed shortly after one of Europe’s biggest conflicts but also as a testament to the concept’s effectiveness.

Its deployment within the German Bundeswehr

The story of spot-based camouflage patterns also continued in post-war Germany. Soon after they were reconstituted, the German armed forces renewed experimentation with camouflage, building on earlier German research. The advent of the Cold War in the late 1940s caused Germany—and France—to intensify these efforts even as, together with Italy and the Benelux countries, Germany unsuccessfully attempted to negotiate plans for a cooperative European Defence Community.

As a result of the failure of those negotiations, the Bundeswehr moved away from jointly developed camouflage patterns and instead began using a modified Splittertarn version as its camouflage standard. This use continued until the early 1960s at which time the Bundeswehr adopted the NATO standard of solid OD Green uniforms. 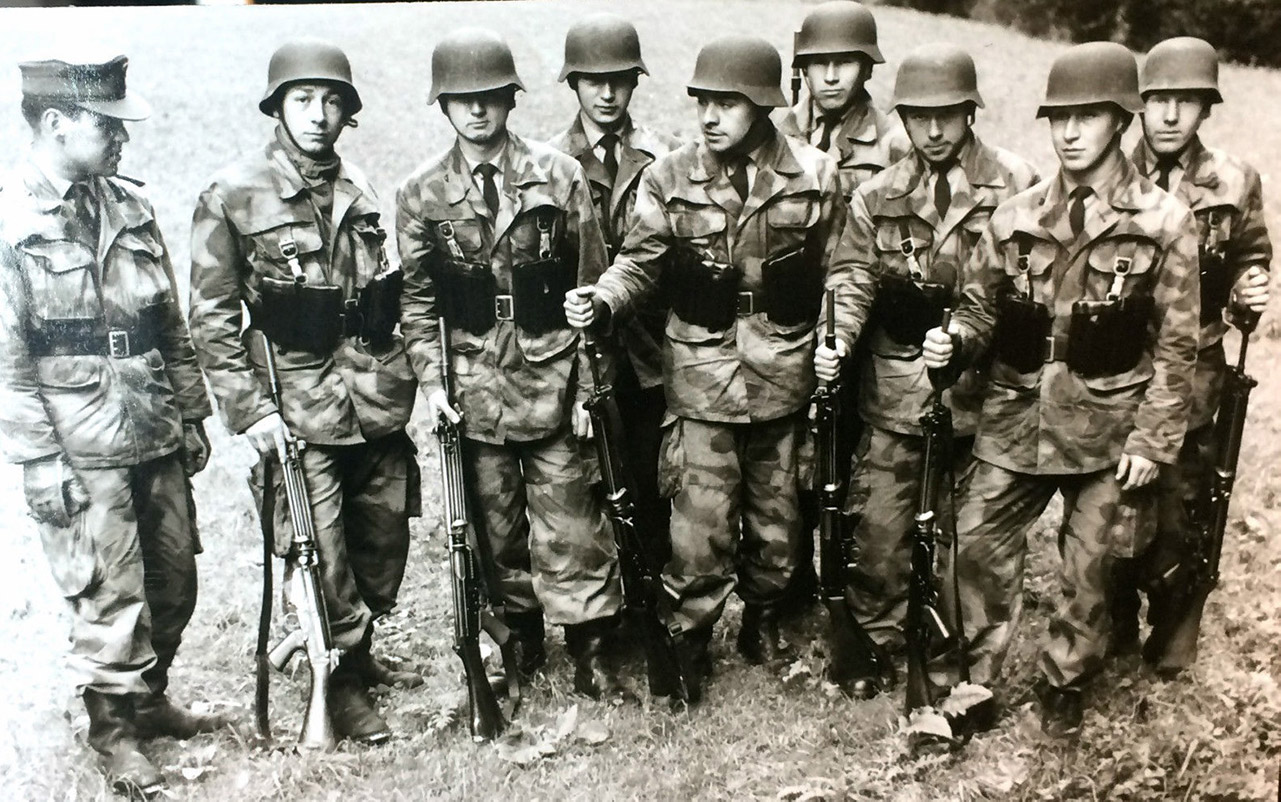 This changed around 1976 when camouflage received attention once more—attention which led to the Truppenversuch 76 (Troop Trials 76). During these trials, several patterns were reviewed and evaluated based on their performance. Again the influence of WW2 was evident: most of the trialed patterns were inspired by German designs like Plane Tree or M44 Pea Dot.

Flecktarn—as it is known today—was part of this trial and went under the name of “Flecktarn B (groß)” or, translated, Spot Camouflage B (big). There were (among others) two more Flecktarn designs, one with smaller elements and the other with less contrast. However, in the end, nothing came of these trials due to financial and political issues.

It was 10 years before Germany once more started the process of providing its soldiers with camouflage uniforms. Beginning in 1986, two Flecktarn designs were tested. Four years later, Flecktarn B was chosen to become “Kampfanzug 90” (Battledress 90). 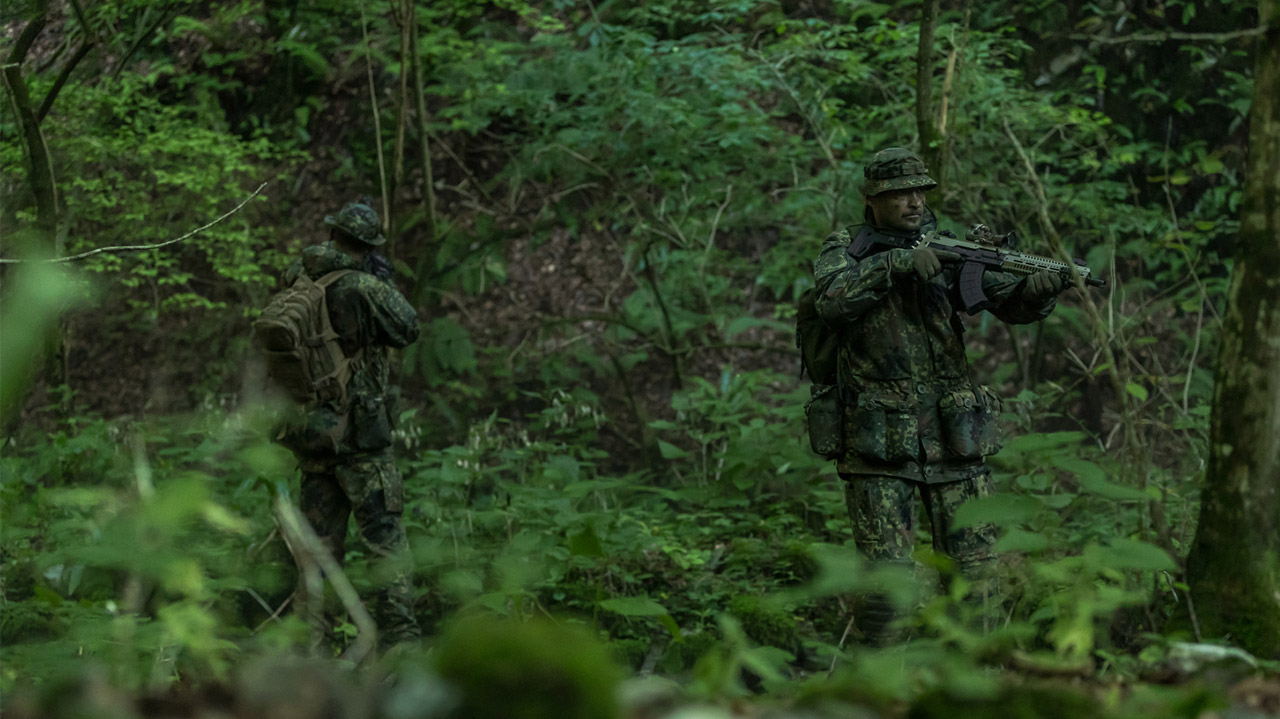 Just like many other camouflage patterns, Flecktarn has undergone several modifications and an evolution of its colours.

First, there is a three-colour arid version called “Tropentarn” (which is often mistakenly called “Wüstentarn”). It was developed for the 1993-94 operation in Somalia. More recently, it is being used for deployments in Afghanistan as well as other global conflict zones.

Not widely appreciated is that 5FT Flecktarn is now in its fifth iteration, which incorporates some drastic changes in the colour scheme. This was done to improve the performance of the pattern not only in terms of blending and disruption but also to keep up with IR developments and the necessity of performing under hyperspectral conditions.

The exact specifications for the colours and their percentage of distribution as well as remission values and other guidelines can be found in the Technical Conditions of Delivery (Technische Lieferbedingungen, a.k.a. TL). Manufacturers must fulfill these TLs in order to be eligible as a supplier. Basically, TL is the German version of Mil-Spec and it lays down strict requirements to ensure consistent quality of material and print. 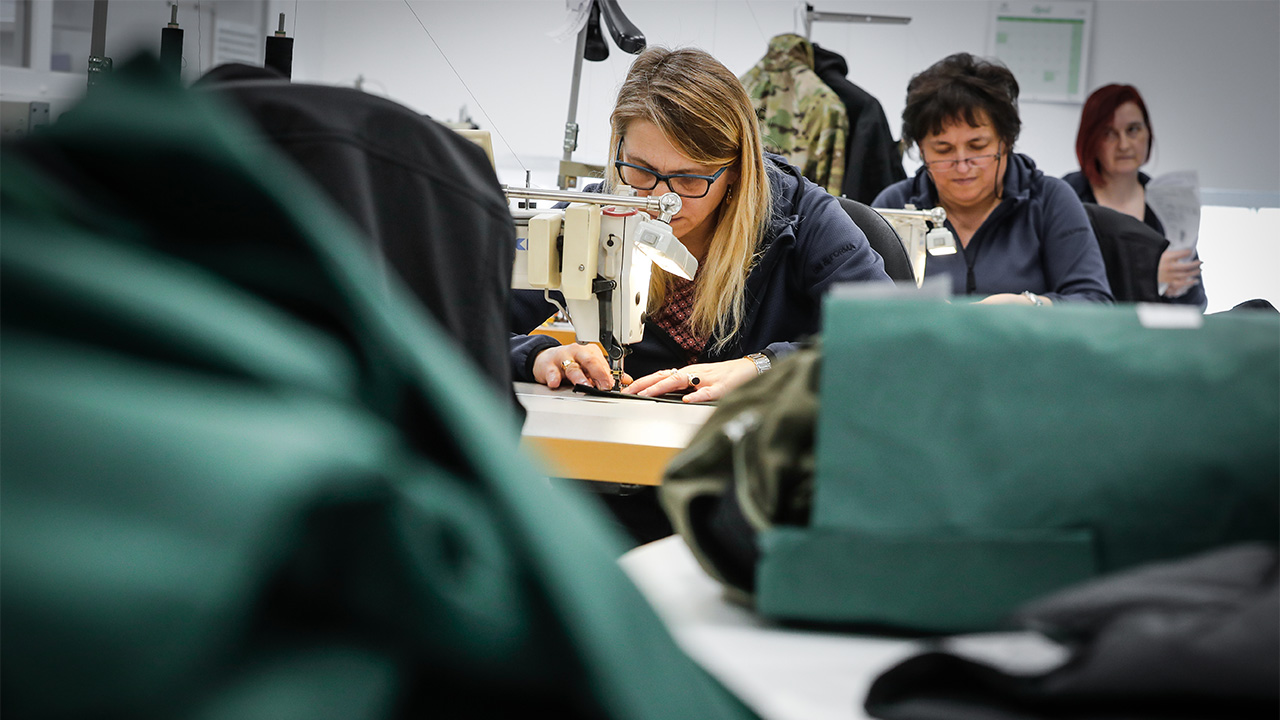 Additionally, as soon as the camouflage print is produced in accordance with these specs, it then falls under rigorous export regulations that require a number of permits (violators face hefty fines).

Flecktarn continues to evolve. Currently, there exist several other variants, each developed for specific operational uses that include arctic/snow, mountains, deserts, and rocky river banks or shorelines. Not included among these variants are their commercial counterparts—they exist, and several companies make them.

More interesting is the development of a transitional Flecktarn variant, which follows the international trend toward a universal camouflage. Coloured with light green, dark green, brown, beige, grey, and off-white, this particular variant supposedly is based on the original Flecktarn pattern but with six rather than five colours. Named “Multitarn”, this pattern is exclusive to the Special Forces of the Bundeswehr—the KSK—and for now there are no plans to release it to any of the other branches of the military.

Influence on other countries 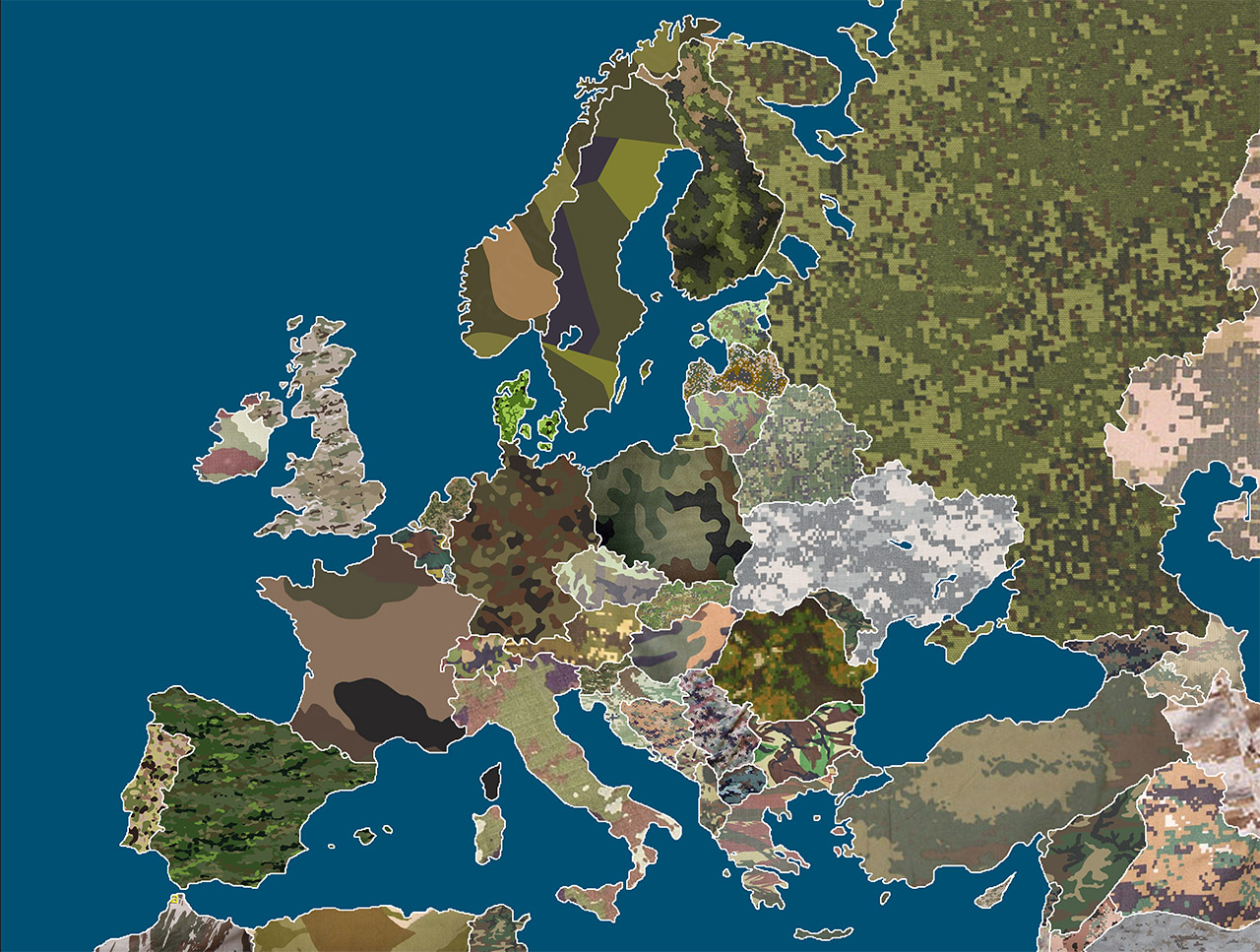 Just like M81 Woodland and DPM, 5FT Flecktarn decisively influenced the development of other camouflage patterns and their adaptation by other countries. One might say these three patterns inspired the next generation of camouflage patterns,much as the three were inspired by the WW2 patterns that preceded them. Accordingly, several countries merit mention:

There is a saying: “Beware of an old man in a profession where men usually die young.” One could easily apply that advice to Flecktarn, considering its longtime continuous use in the German armed forces and its influence on other camouflage patterns around the world.

Flecktarn proved its worth by emerging as the undeniable winner of countless NATO woodland comparisons.

And because of its ready adaptiveness to many operational environments and developments, Flecktarn is assured of a continued place in military camouflage. Consider, for example, the latest revision of 5FT Flecktarn. It boasts not only improved colours but also better IR capabilities. And with the newly developed Multitarn, transitional camouflage patterns are facing a worthy rival as well.

At UF PRO, our garments are offered in many choices of camouflage patterns—and Flecktarn is one of them. Go here to view our entire inventory of gear available in Flecktarn.