The ultimate guide to Camouflage Patterns

When talking about military and tactical equipment, the topic of camouflage comes up sooner or later. One could go through the entire history of mankind, from every day hunting and survival, to the long history of wars and conflicts itself. But when it comes to printed camouflage on uniforms, the focus quickly shifts to the 20th and 21st century. That’s why I want to write about some milestones in the history of camouflage, with a focus on “western” patterns.

If you’re already familiar with the evolution of camouflage patterns and are interested in a specific part, you can jump ahead to those sections by clicking on the links below.

The 20th/21st Century of Camouflage

Even though several armies started to use muted solid colour uniforms in the 19th century as a result of the changing nature of warfare, only the First World War (WW1) made it necessary to use camouflage on a big scale.

The reasons can be found in the conflict and its new technologies.

Aerial reconnaissance made it necessary to hide installations and equipment, and because of new weapon systems (long range rifles, machine guns) it was crucial to “hide” soldiers as well.

France had to learn it the hard way during the initial phases of WW1, being the only country still using highly visible uniforms.

But the French learned quickly and started employing artists and theatre set designers to develop techniques to conceal everything from vehicles to buildings.

They came up with disruptive patterns and trained military units to use these approaches to conceal their equipment. Paint jobs and the first use of camo nets emerged, as a result.

Objects were not only hidden – based on the concept of mimicry (to make something appear as something else) deception was being used as well. Examples are papier mâché heads, which were used to draw enemy fire, or hollowed out trees, to hide marksmen.

Several scientists and artists are regarded as key figures in the history of camouflage and have to be named as well.

And if some of the names might ring a bell – Penrose and Cott were the impulse for the name of the current PenCott family of Hyde Definition. But let’s get back to our initial timeline. 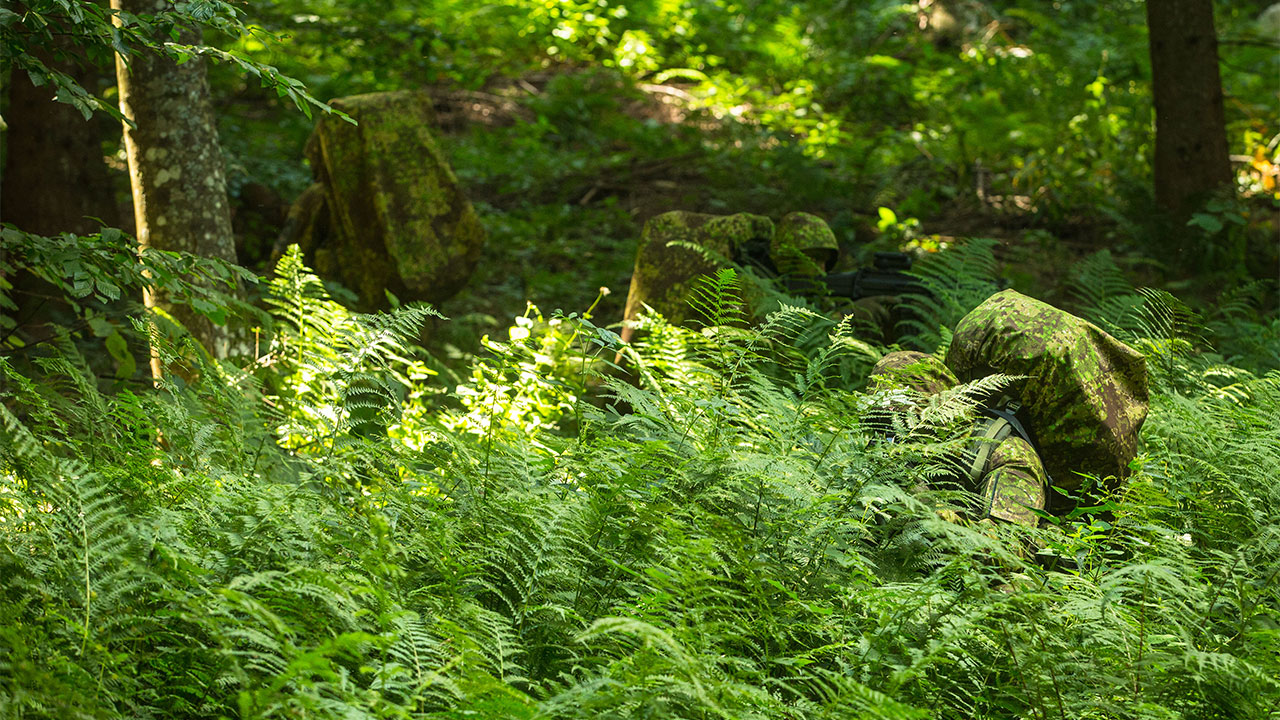 The interwar period introduced the production of camouflage prints on fabric.

At first the Italian “M1929 Telo Mimetico” and then the German “Buntfarbenmuster 31”, aka “Splittertarn”. These were actually printed on shelter halves and provided basic camouflage when worn as a poncho.

Only during WW2 industrial printing of camouflage fabric and the manufacture of widely issued uniforms became a standard.

At first only for elite troops like paratroopers, and later for the rest of military branches. Especially the Waffen-SS was equipped with several different patterns, all designed by Johann Georg Otto Schick, an art professor based in Munich.

US-Forces used camouflage mainly in the Pacific theatre, since their Frogskin/Duck Hunter pattern was mistaken for enemy SS forces on European battlefields.

WW2 also laid the groundwork of many camouflage patterns to come. The British Brushstroke pattern, which was used on the famous Denison Smock, can still be found in many variations today.

And the name says it all: the initial pattern was literally painted on the smocks with brushes, creating a variety of unique jackets.

Reason enough to take a short look at the family trees in camouflage history.

There are roughly 10+ families of camouflage patterns. “Roughly”, because it is a matter of discussion, perspective and also region.

Especially nowadays a magnitude of designers are creating hundreds of patterns as we speak, which most of us probably haven’t even heard of.

One of the grandfathers of camouflage.

First used by the United Kingdom it quickly influenced other countries like Belgium and France (the Lizard pattern) to do their own versions of this pattern in the 1950s and 1960s.

You will still find it in use in countries like Pakistan or Zimbabwe (which inherited it from Rhodesia). 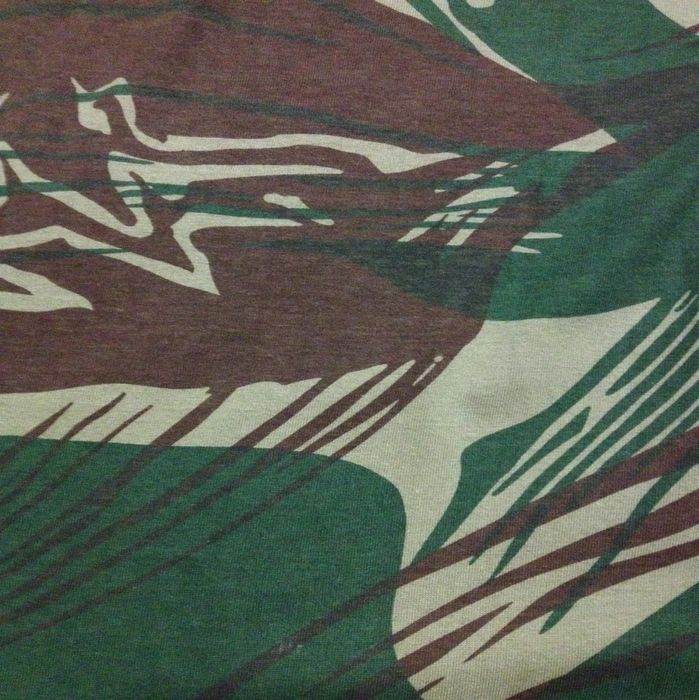 It became so popular it is still in use by various Middle Eastern countries in different variations. 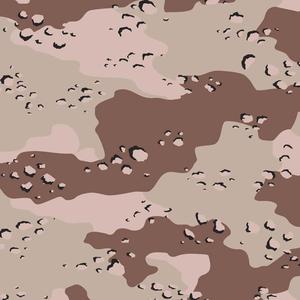 Just like M81 Woodland, it has become one of the most used camouflage patterns in a variety of copies and colour schemes. 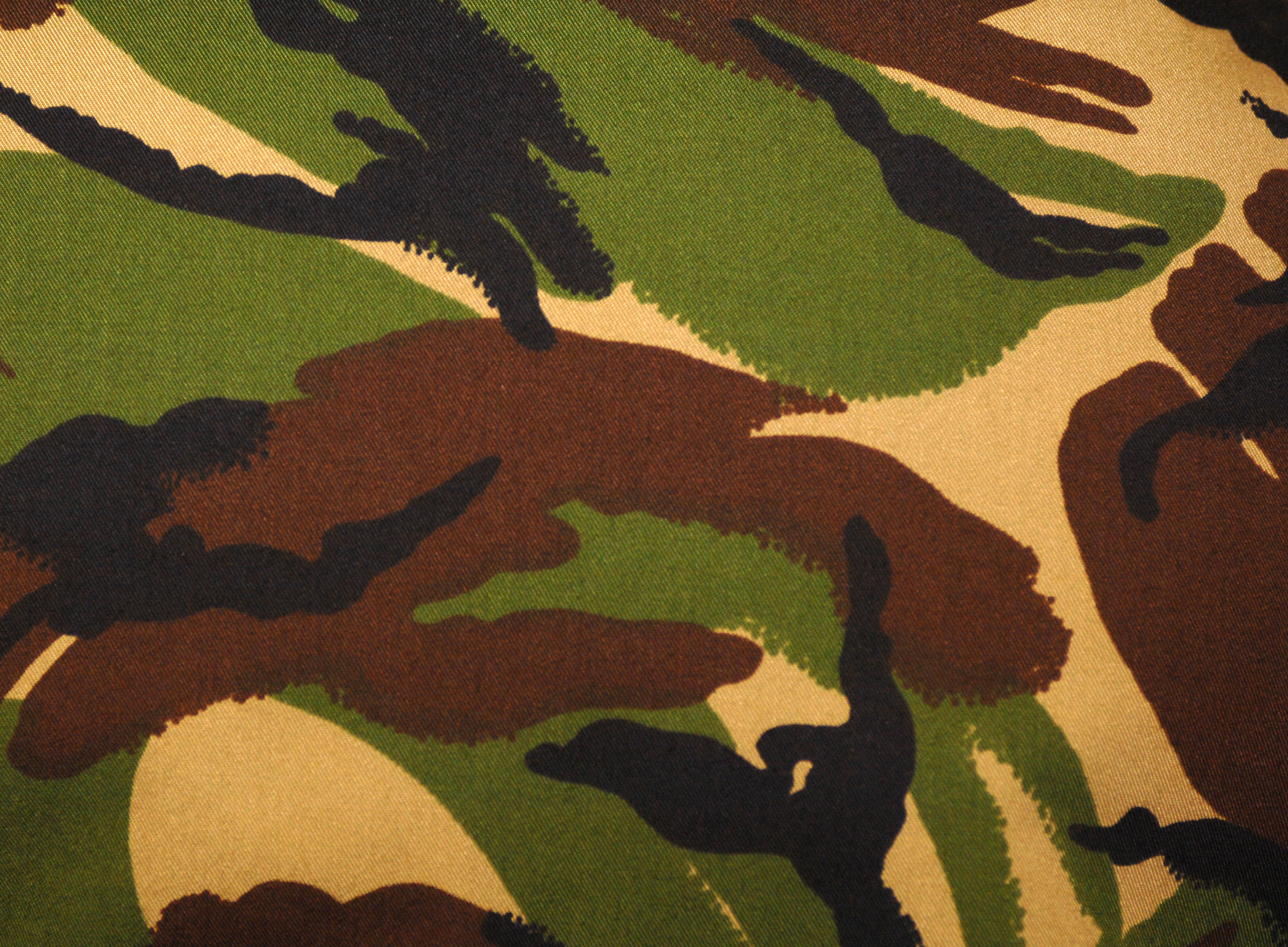 Digital is not necessarily pixelated camouflage – a wide misconception! In fact, digital patterns are those which are computer and algorithm based.

There have been pixelated patterns long before Canada started issuing pixelated uniforms in the late 1990s.

The USMC followed this example and created MARPAT in 2001. But while CADPAT or MARPAT might be digitally designed, so are Vegetato, Multicam etc. 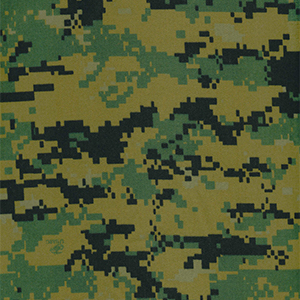 One of the lesser known patterns in Europe, this has its origins in the American M1942 spot camouflage of WW2. Used mainly in the war in the Pacific, its descendants can be found in Asia, but also Latin- and South America. The Australian DPCU is also considered a “relative”. 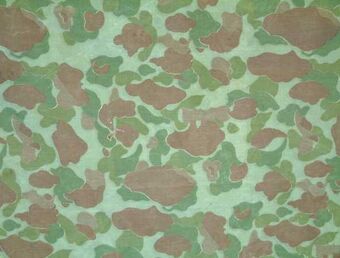 The result of the Bundeswehr Truppenversuch 76, it is not only a trademark of Germany, but also led to several similar designs in Belgium, China, Denmark and Poland. 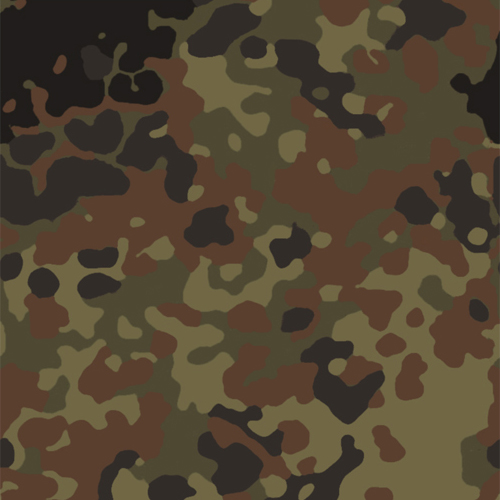 Take a look at UF PRO gear in Flecktarn here.

In 1948 the US Army Engineer Research and Development Laboratory created the so called ERDL pattern, which is not only synonymous with the Vietnam War, but also influenced several other patterns.

A 60% enlarged version became M81 Woodland and other countries use it one way or the other. 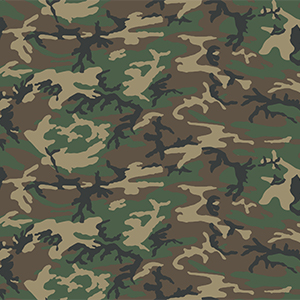 These are quite unique, especially when considering that several came up independently in the 20th century. Starting with Belgium, but also the Philippines and Yugoslavia. 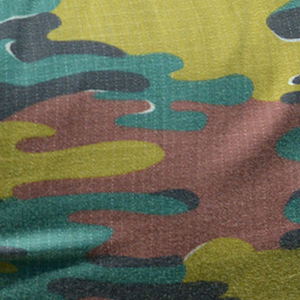 Even though the Splittertarn pattern is closely associated with WW2, it is still widely in use.

While Switzerland used it until 1955, it was also the initial camouflage of the German Bundeswehr and Bundesgrenzschutz. There are several variations in Bulgaria and the Swedish M90 is the most modern variant today. 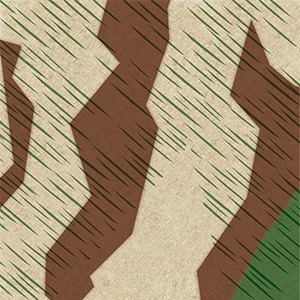 A “cousin” of Brushstroke, it was inspired by the French Lizard design. Quickly becoming something of its own, it can be found in various jungle environments. 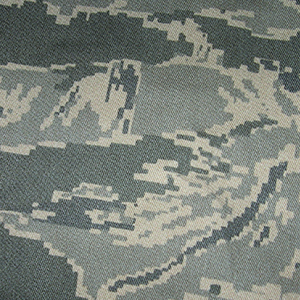 In the early 2000s a new phase of camouflage development started, not only in terms of pixelated designs, but also to the approach of camouflage itself.

The US Army Natick Laboratories teamed up with Crye Precision (CP) to develop a universal pattern suitable for different environments and vegetation zones.

The result of this cooperation was the so called “Scorpion” pattern. The US Army Uniform trials in 2004 resulted in a different pattern however: a recoloured version of the pixelated MARPAT design, called Universal Camouflage Pattern (UCP).

In conservative military circles at first ridiculed as “airsoft camo”, the soldiers of the US Army quickly learned to appreciate Multicam, when it was fielded in Afghanistan, where the UCP pattern performed so poorly that it was even considered dangerous.

As a result of this feedback the US Army had started the Camouflage Improvement Effort (CIE), with the result that in the initial phases Multicam was fielded exclusively for the Afghanistan campaign.

The last phase of the CIE changed everything.

It opened a solicitation for a new camouflage family, designed for arid, transitional, and woodland/jungle environments.

Needless to say, this started a “gold rush” for designers. All of a sudden several companies started to either participate in the solicitation, or to cash in on the newly developing market for camouflage.

In the end four companies were picked to supply fabric for further testing: Crye Precision, ADS/Hyperstealth, Brookwood and Kryptek.

Crye made the cut (no pun intended), but the finalisation of the contract ceased, because of licensing fees for the printing.

As a result, the US Army went back to the original Scorpion pattern, and did the same thing Crye did before: change it just enough to prevent legal repercussions. Scorpion W2 was born. 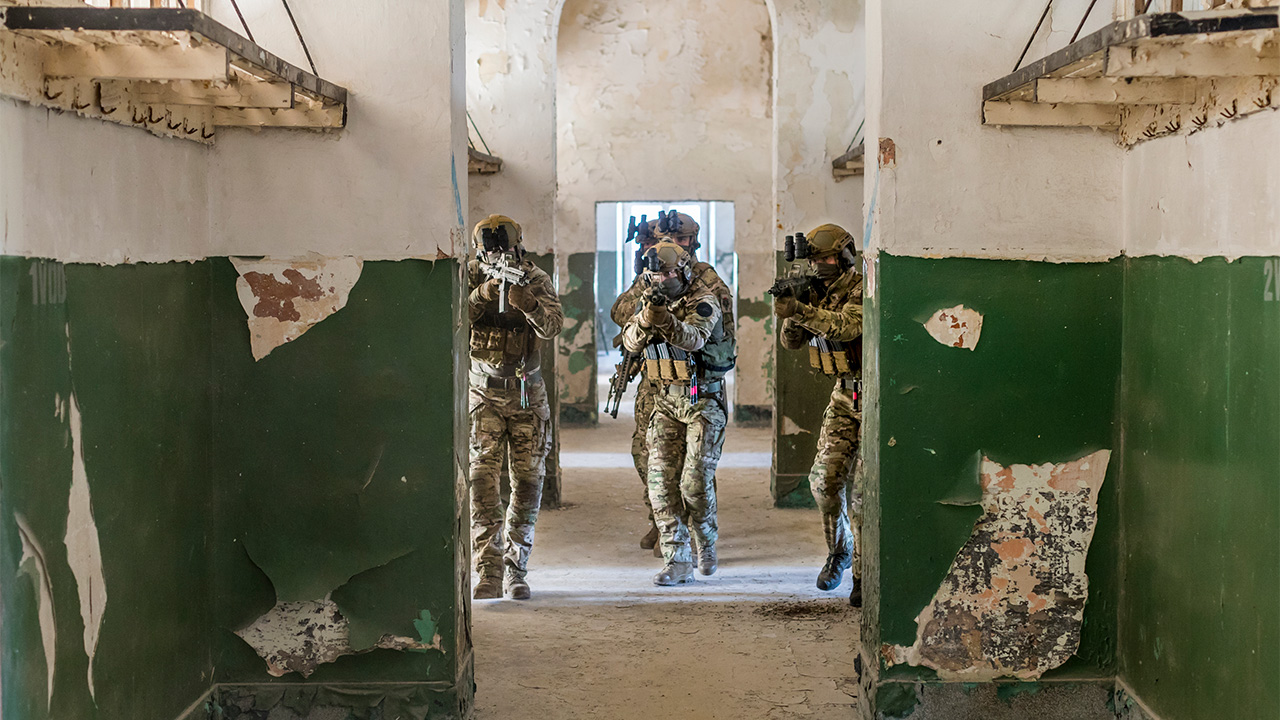 Take a look at UF PRO gear in MultiCam here.

By now the previously mentioned gold rush is over.

And even though new camouflage designs with different approaches still enter the market, the actual dominance of Multicam and its derivatives is unbroken.

As a matter of fact, just in terms of popularity and widespread use, you could compare it to M81 Woodland.

The colour scheme and overall feel of Multicam has become the new standard among NATO forces. Even the Russian special forces community is embracing the pattern.

The future holds different and technology based challenges.

For example: Guy Cramer finally opened up on his Quantum Stealth technology, which uses layers of different shaped lenses to bend light around objects.

While this is primarily aimed at concealing infrastructure and bigger objects, other scientists are working on smart fabrics, which are using optical, electrical and magnetic properties to change colouration, while at the same time being able to elude hyper-spectral devices. 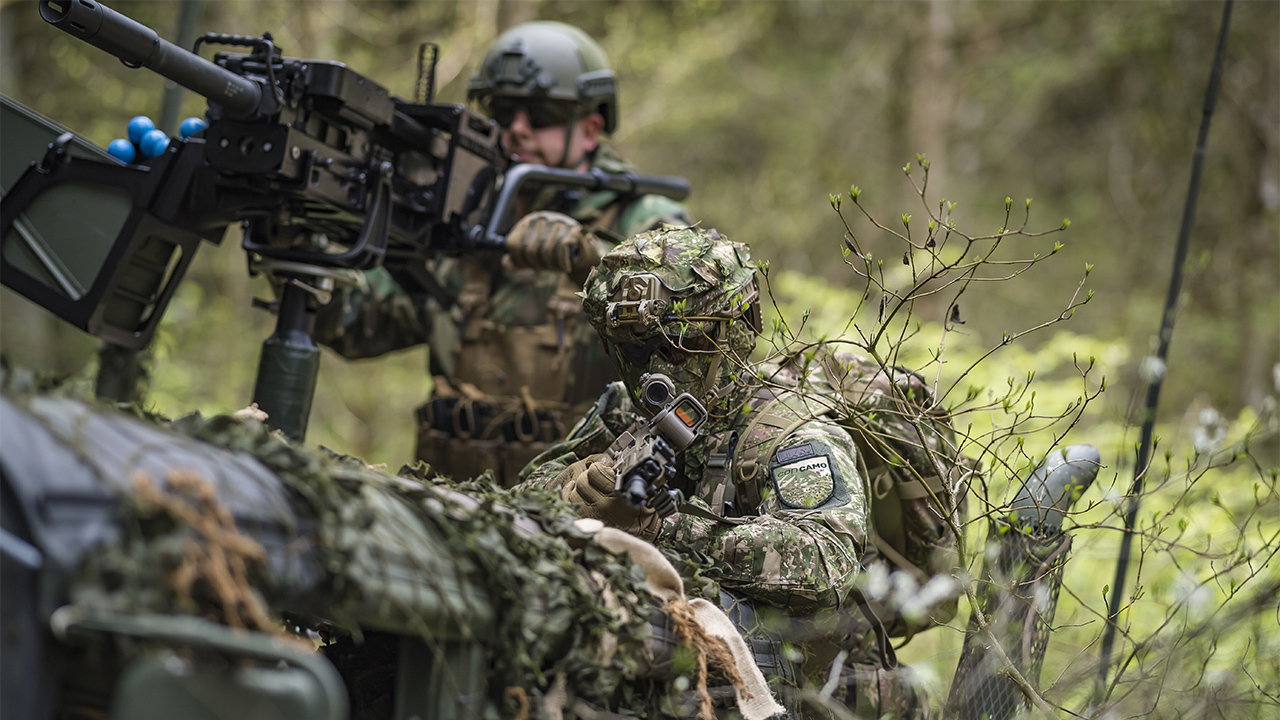 The last hundred years were quite eventful, when it comes to camouflage. Some patterns are iconic because of certain wars and are deeply embedded in our cultural memory.

Furthermore, new developments are often the result of the changing nature of warfare or technology itself.

The current development of hyper-spectral devices is testament to this.

Operations shifted to highly specialised night time missions and asymmetric threats. The wide availability of low budget drones is not making this any easier.

It is safe to say, we live in interesting times, and camouflage enthusiasts will not get disappointed in the coming years, with plenty of exciting developments to come.