Differences in colour or camouflage along with knee and elbow protection are easy to spot from afar. On the surface, clothes that “look tactical” seem to have only minor differences. But do they really? In this post, we dive deep into the differences between police and military clothing.

Just by looking at the uniform (and ignoring any unit patches or big bold letters printed across the back of a tactical jacket), we’d be willing to bet that you can probably immediately tell whether the wearer is a member of the military or law enforcement.

Your first clue is the uniform’s colour. If you see black or navy blue, it’s almost certainly law enforcement. Those are just the colours the police always wear, and you’re accustomed to seeing LEOs in them.

On the other hand, if you see a greenish, brown-grey, or camouflage pattern, then you can be pretty sure it’s a military uniform.

There are exceptions, naturally. But, why those colours? The answer comes from science. Researchers have found that LEOs who wear navy blue uniforms are viewed in a more positive light than those who wear ranger-green uniforms.

Colour is just one point of differentiation between military and police uniforms. Another is styling. The cut of the garments helps you intuitively identify them as belonging to one service branch or the other. The presence of other gear such as plate carriers, belts, and backpacks are another differentiator (those particular items are used almost exclusively by the military).

There also are big differences in functional elements, which include pockets, fabrics, and even knee protection.

But all of that just touches the surface. To really understand and appreciate the differences between military and law enforcement uniforms, you need to go back in time to the point where police and military branches began to go their separate ways.

For most of history and in most places around the world, police services were a function of the military. There were exceptions, such as the ancient Athenian police and Japan’s samurais. However, by and large, law enforcement as a service branch of its own didn’t really become a thing until more modern times.

The concept of police forces took root and evolved during the 18th and 19th centuries, pushed along by cornerstone books such as Polizeiwissenschaft by Phillip von Hörnigk and Bibliographie der Kameralwissenschaften by Magdalene Humpert. These treatises layed out a blueprint for the use of independent, non-military police forces in a rapidly industrializing world.

As police departments came into being, there followed a progression of police uniforms. Initially, in the early 19th Century, the uniforms came primarily from military surplus. 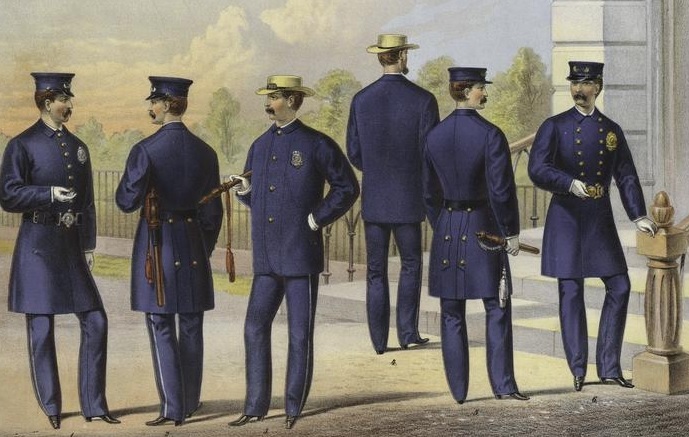 Later, there was a move to make police uniforms more diverse and less like traditional military garb. The biggest force for change away from military styling did not originate with law enforcement but with the military. It was the decision to make camouflage an integral element of the basic military uniform that created the split as we know it today.

There were two notable milestones in military uniform design. The first occurred in 2003 with the introduction of 5.11’s first tactical pants. The second occurred in 2007, the year Crye Precision released its combat shirt. These dates are generally accepted as the official points in time where police and military clothing took off in design-and-construction directions of their own.

Theory is one thing. It’s useful, but only to an extent. What matters, however, is real life. It matters because real life shows us what actual operators actually need in the field—everything else can be discarded. Not only do insights concerning real life spare products from becoming overly complicated, it also allows unnecessary weight to be shaved from them and to add more comfort.

Our most shining example of the fact that theory does not translate to everyday use is the ingenious solution our development team came up with for the early models of our Striker Combat Pants. The first model included upper-thigh tourniquet (TQ) loops (mainly for ease of use and the practicality of having it close by when needed). Turns out we solved a problem that never existed: operators simply didn’t find the TQ loops useful.

Be sure to read the history of our Striker BDU—you’ll find it quite interesting.

The need to test and see what works and what doesn’t leads to the removal of redundant features that do nothing but add weight and unnecessarily limit breathability. And that’s another reason why you find differences between uniforms for police and those for soldiers.

From the environment comes the construction

Consider the typical scenarios in which the gear is used.

With all that in mind, let's now build from the ground up a pair of tactical pants (police) and a pair of combat pants (military).

For military pants you need to start with a fabric that can withstand daily wear-and-tear. Moreover, that material must not be vulnerable to rips from encounters with thorns, broken glass, nails, and other sharp objects. This means you’re going to opt for a material offering better durability.

In this instance, ripstop nylon-cotton is the best choice. It’s comfortable, resists abrasion, and is very durable. Dive deeper into nyco by reading this article.

It helps to pair nyco with CORDURA®. Why? Because it reinforces crucial friction points including knees, belt loops, and the lower hem.

Of course, there are exceptions to this rule; combat pants in Flecktarn and in unicolours use polyester-cotton blends. The reason is that polyco offers better comfort—a very important consideration for garments you must wear 24/7. 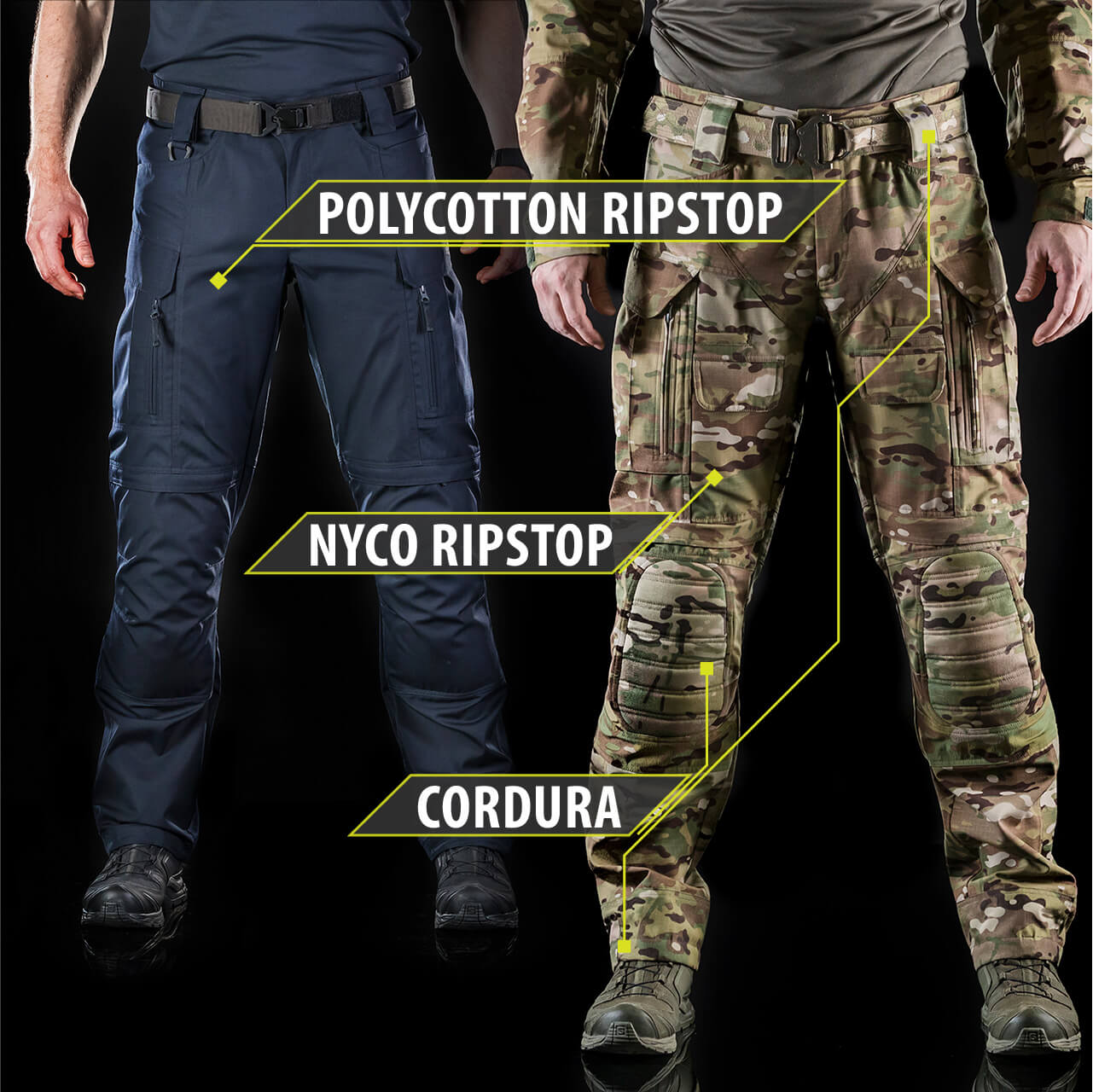 For law-enforcement tactical pants, you’ve got to come at it from a different direction. This is a grament intended mainly for wear in urbanized environments, those where you won’t be encountering nails and branches at every turn. This means you’re going to opt for better comfort.

The clear-cut choice is ripstop polyco. From it you’ll obtain great comfort and without the issues of durability that come with cotton alone. An option is to further increase durability by adding CORDURA®. But, as a whole, this is the perfect combination of everything you need from a fabric for tactical pants.

Learn about polyco; read this article.

Besides choice of material, there are other things you can do to increase a product’s lifespan. For example, we are using a newer technique called “seam overlapping” which involves reducing the number of critical points at which a uniform can tear after an encounter with a sharp protruding object. UF PRO products employing this technique include the P-40 Gen.2 Tactical Pants, Striker X BDU, and Striker ULT Combat Pants.

Although incorporated with our latest P-40 Gen.2 Tactical Pants, seam overlapping is a feature primarily intended for military uniforms. Rationale: reduce the amount of things that can go wrong and your end result will have less potential to fail.

Then there’s the construction itself. We use our own anatomic fit techniques for both police and military uniforms. Read more about this in Anatomic cut, is it just fashion?

One more construction element to contemplate is no-melt/no-drip. Where military uniforms are concerned, you have to think about adherence to the no-drip/no-melt standard because wearers are constantly under threat of harm from explosives and heat. Luckily, nyco conforms to this standard, so we can check this concern off our list.

Read our Lizard/Skin | Materials Breakdown blog post for further insights about why no-melt/no-drip matters and what it means for comfort and durability.

From the type of work comes the functionality

You no doubt noticed that combat pants and shirts usually have more pockets than do other garments.

The reason is that military guys tend to carry more gear. They must, because they can’t just run back to base for needed items. From communication and GPS devices to multitools and IFAK pouches, more gear means you need diverse storage configurations and more space to hold everything. Want to place your folded boonie hat in the side pocket? Gloves? Snus? Combat pants have you covered.

In common they have hand pockets and side pockets. What’s different is the added knife, thigh, and lower-leg pockets of the Striker X. 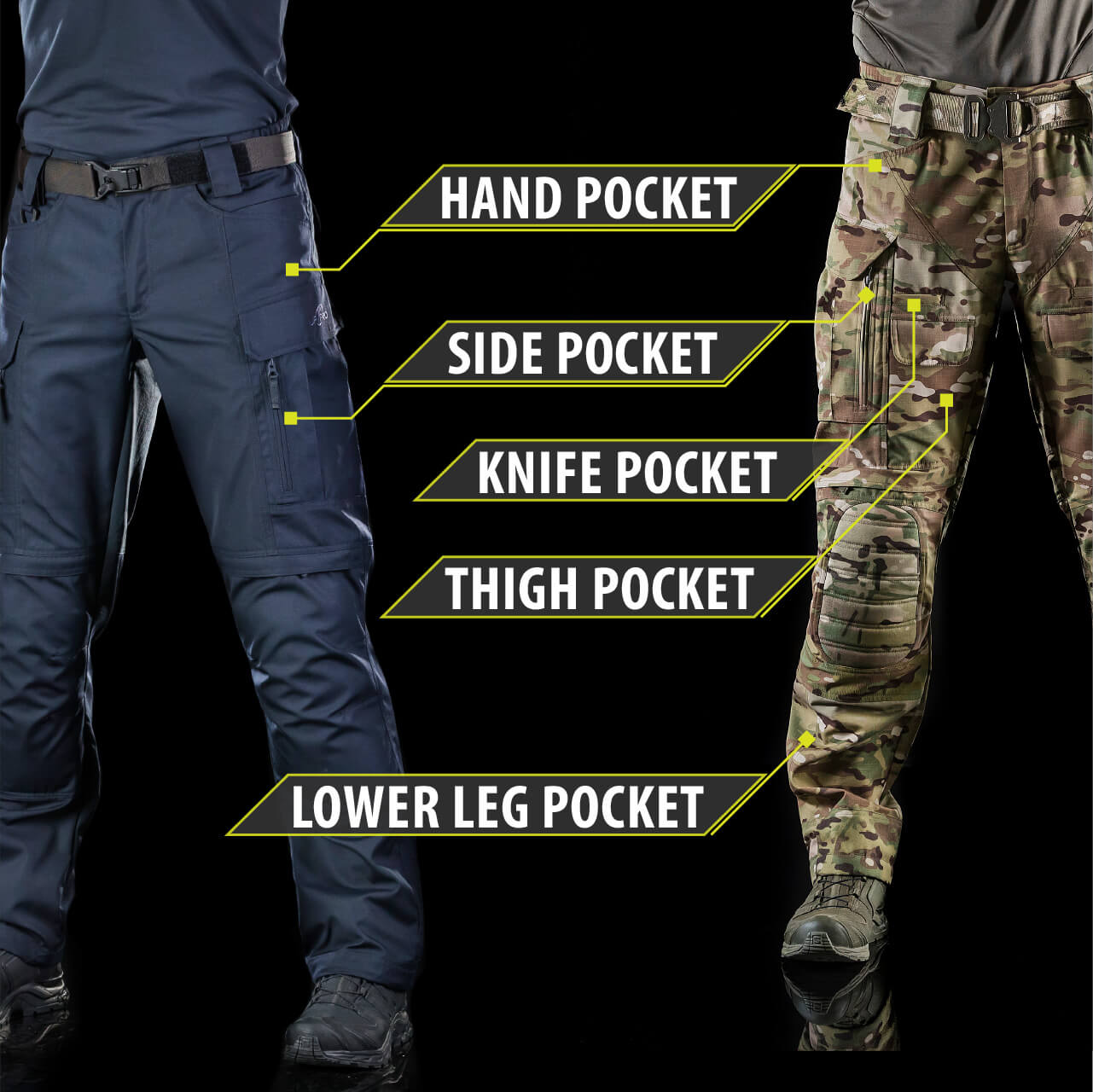 Another prominent difference is the capacity of the side pocket and it’s closure mechanism. Combat pants have larger capacity pockets, so guys can fill them to the brim with gear. Uniquely, they have a redundant closure mechanism, which works as a fallback in case your buttons fall off. In the case of our Striker ULT Combat Pants, the fallback is an elastic cord inside the pocket’s brim. This prevents gear from falling out even if the canadian buttons break. 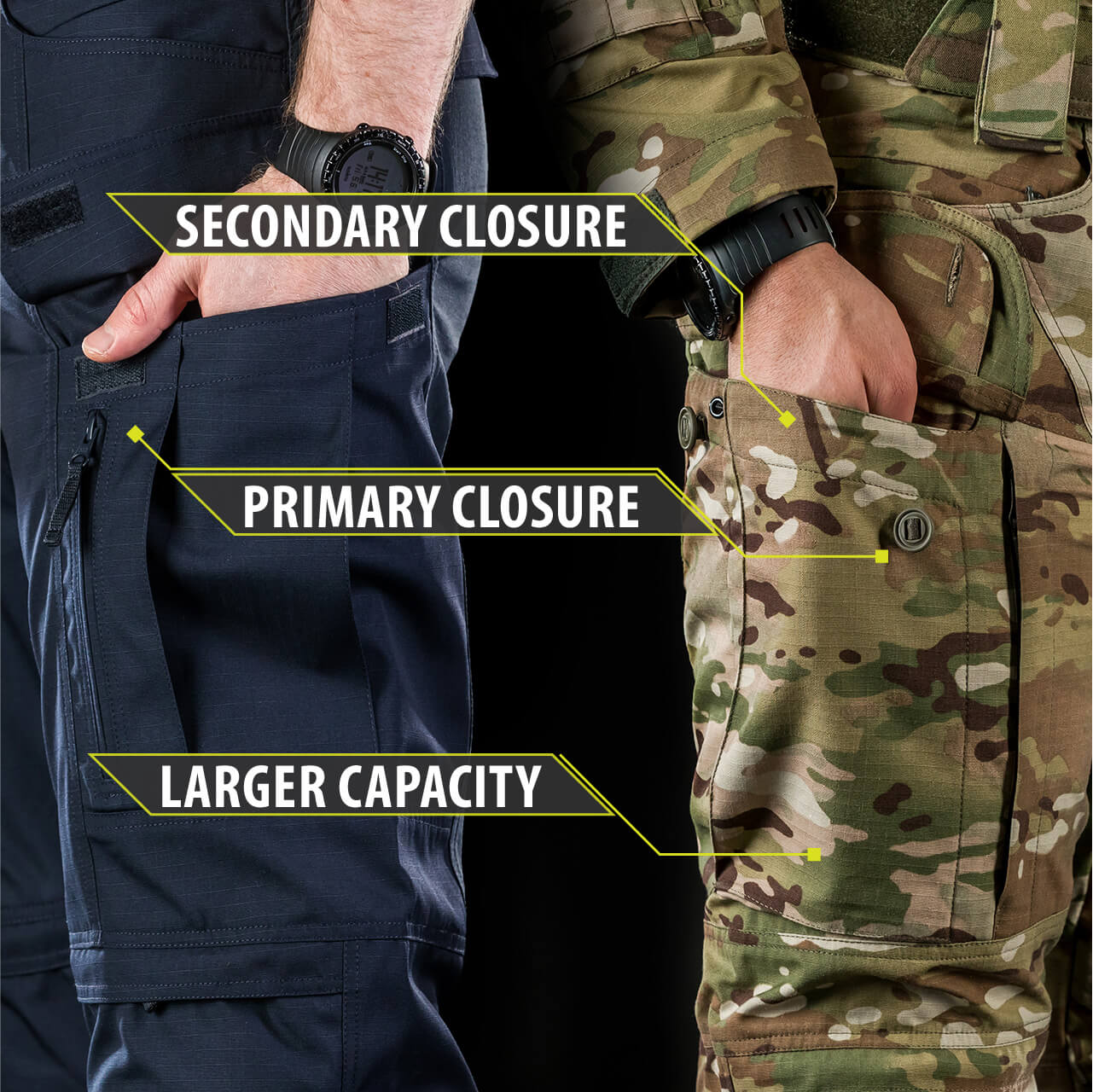 For tactical pants you don’t need excessive storage space. That’s because the duty belt carries all primary gear. Besides, you usually have the relative proximity of your station. Also, removing excess redundant pockets from tactical pants lightens the weight and pares down layers (resulting in greater comfort).

Even at the surface, there are big differences in the knee sections. For police units, a ripstop polyco layer is more than sufficient, since kneeling and crawling just isn’t part of the average LEO’s regular routine. The singular layer of polyco holds up well enough over time and is breathable, so you don’t notice any difference compared to regular pants if you aren’t wearing knee pads.

The Striker Combat Pants lineup is designed the other way ‘round. Military operators are expected to wear knee pads 24/7, so additional padding and CORDURA® reinforcements are added to provide better comfort and extend longevity even if you’re constantly putting your knees in contact with the ground. 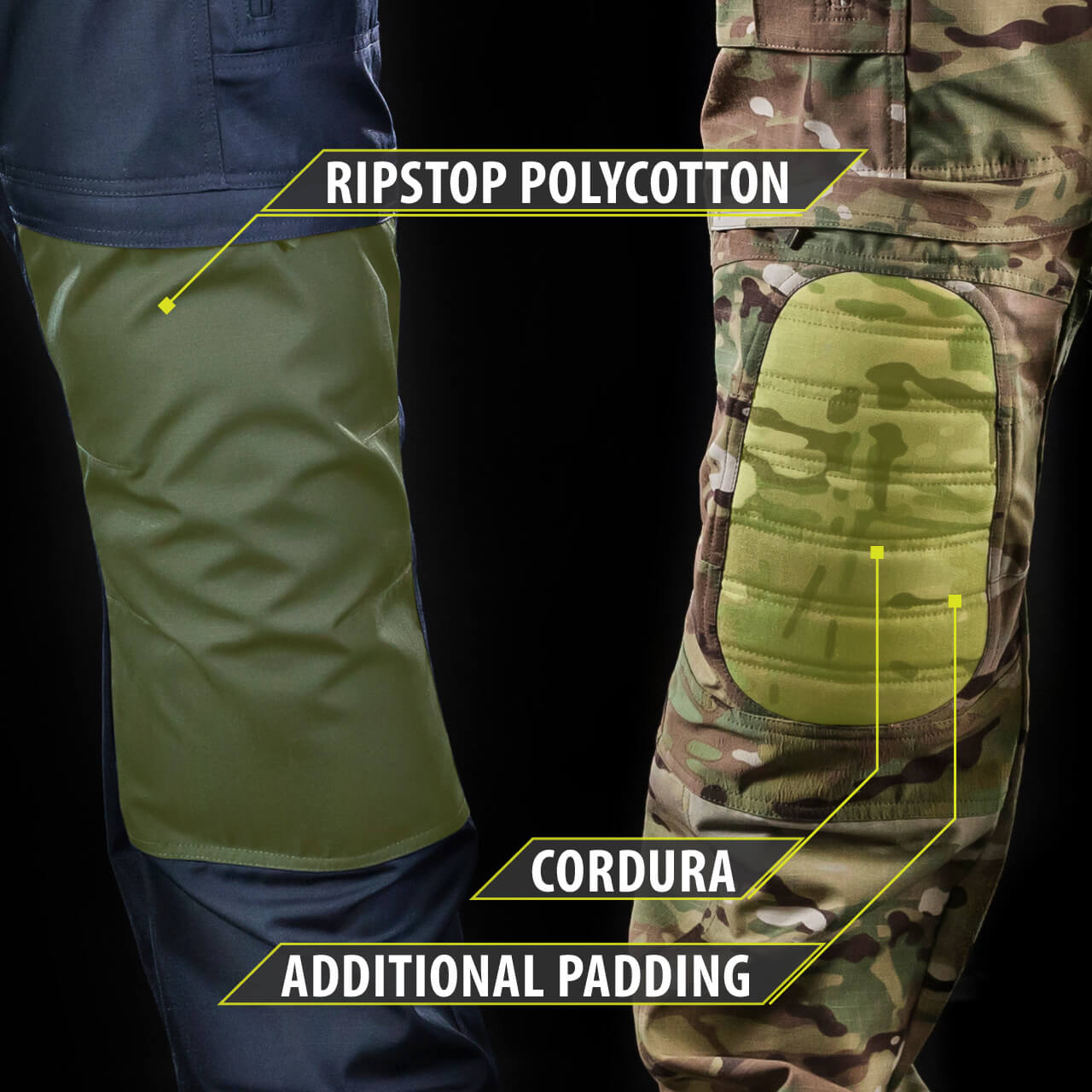 Wearing knee pads (and having to rely on them daily) is good practice—it helps keep your knees intact, which also means that a good add-on to have is knee-width adjusters. With our adjusters, you set them once to get ongoing, lasting knee protection that’s tailored to your body’s needs.

The surface area is also more focused at the point where your knee touches the ground. Because of the added layers, you have to look out for moisture permeability and adding weight, thus a more accurate knee section makes more sense.

Military and police uniforms are vastly different from one another and for good reason. Environment and the type of work performed while wearing each is itself different. Different specifications get fulfilled with different designs.

Think of it this way. A tractor is an awesome machine. Robust, designed for off-road work and much more powerful than a Prius. But as great as it is, it isn’t meant for longer commutes. A hatchback is just better for that.

And that is what makes police and military uniforms unique. The right tool does the job faster and better. 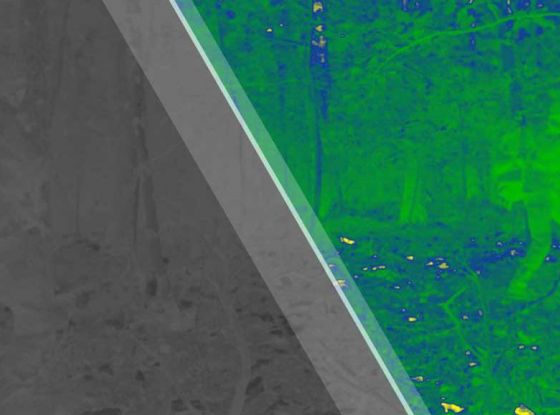 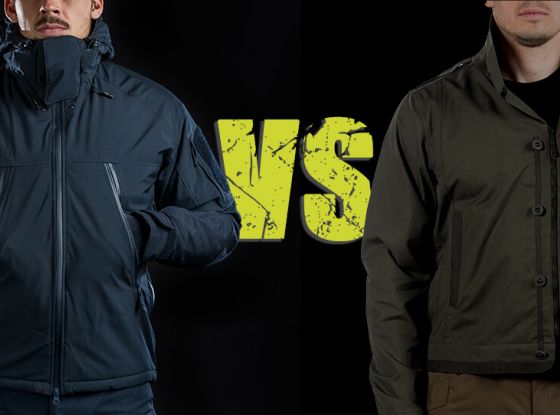 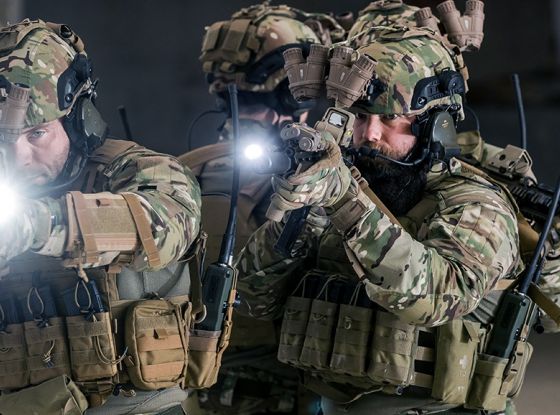 MILITARY CAMOUFLAGE | WHAT IS IT?