Hook-and-loop fastener material (trade name Velcro) has a long history in the tactical space. It’s most often used as a closure system. But exactly what is this material and how does it work? Does it have drawbacks—and, if so, what are they? Can anything beat Velcro as a tactical gear closure-system?

Hook-and-loop fastener material is used as a closure system in a wide variety of tactical products that include clothing, body armour, weapons accessories, and other secondary gear.

It’s commonly referred to throughout the tactical industry by it’s trade name, Velcro.* However, Velcro refers to only one specific type of hook-and-loop fastener, that made by Velcro I.P. Holdings LLC. Although there are many types of hook-and-loop fasteners produced by many manufacturers, they all are referred to in common usage as Velcro (much as all tissue paper for the nose is labeled Kleenex).

The name Velcro was created by hooking and looping together a pair of French words: velours, which means “velvet;” and croché which means “hook.”

The mechanism of Velcro is simple yet ingenious and is adaptable to practically any product. It consists of two pieces—a “hook” and a “loop.” These component pieces have properties that cause them to adhere when they come into contact with one another and remain so until sufficient force is applied to pull them apart.

*Throughout this blog post we’ll use the brand name “Velcro” and the generic name “hook-and-loop fastener” interchangeably. 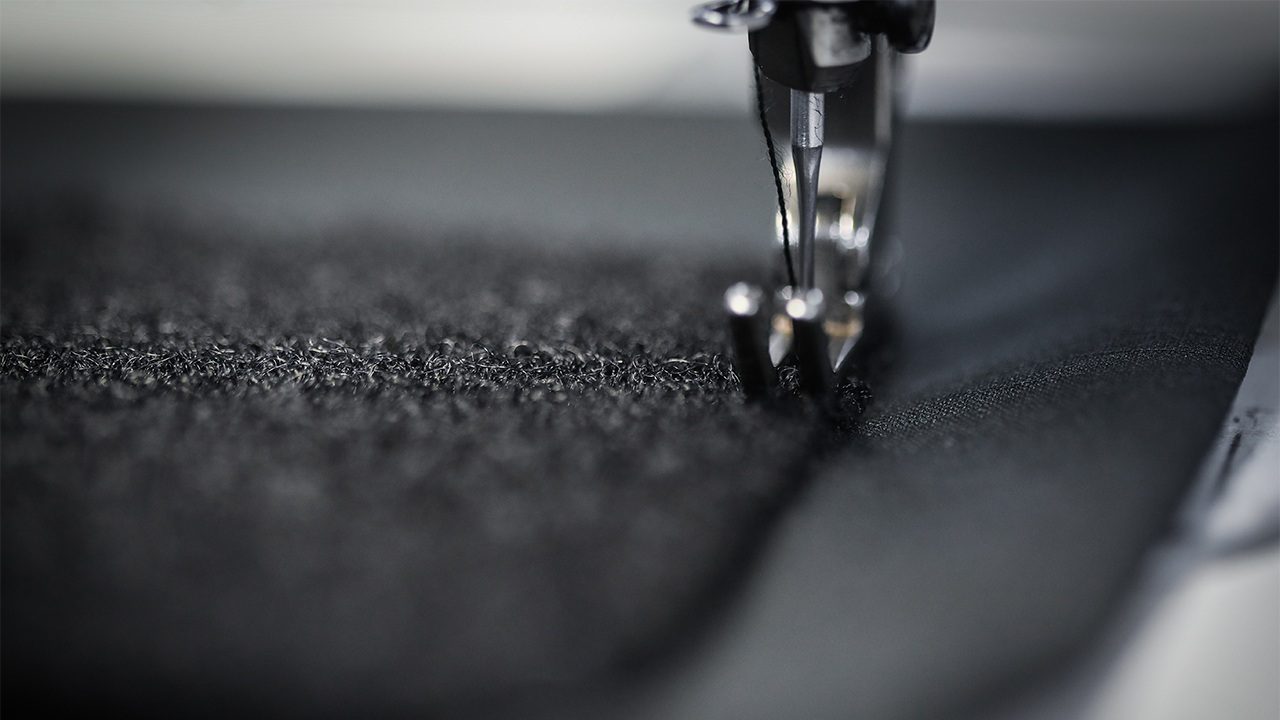 The story behind Velcro is a classic case of viewing nature and then turning what has been observed into a usable technology.

It all began in 1941. That year, a Swiss electrical engineer by the name of Georges de Mestral went on a hunting trip with his dog Milka in the mountainous European Alps. He wasn’t there long before he noticed that lots of burdock seeds had attached themselves to his socks and to Milka’s fur. 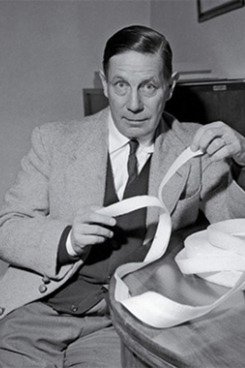 After returning home from the hunting trip, de Mestral examined under a microscope some of the burdock seeds he collected. To his amazement, he observed that each seed contained thousands of tiny hooks. These hooks were capable of latching onto, for example, fibre strands such as those found in de Mestral’s hunting socks. 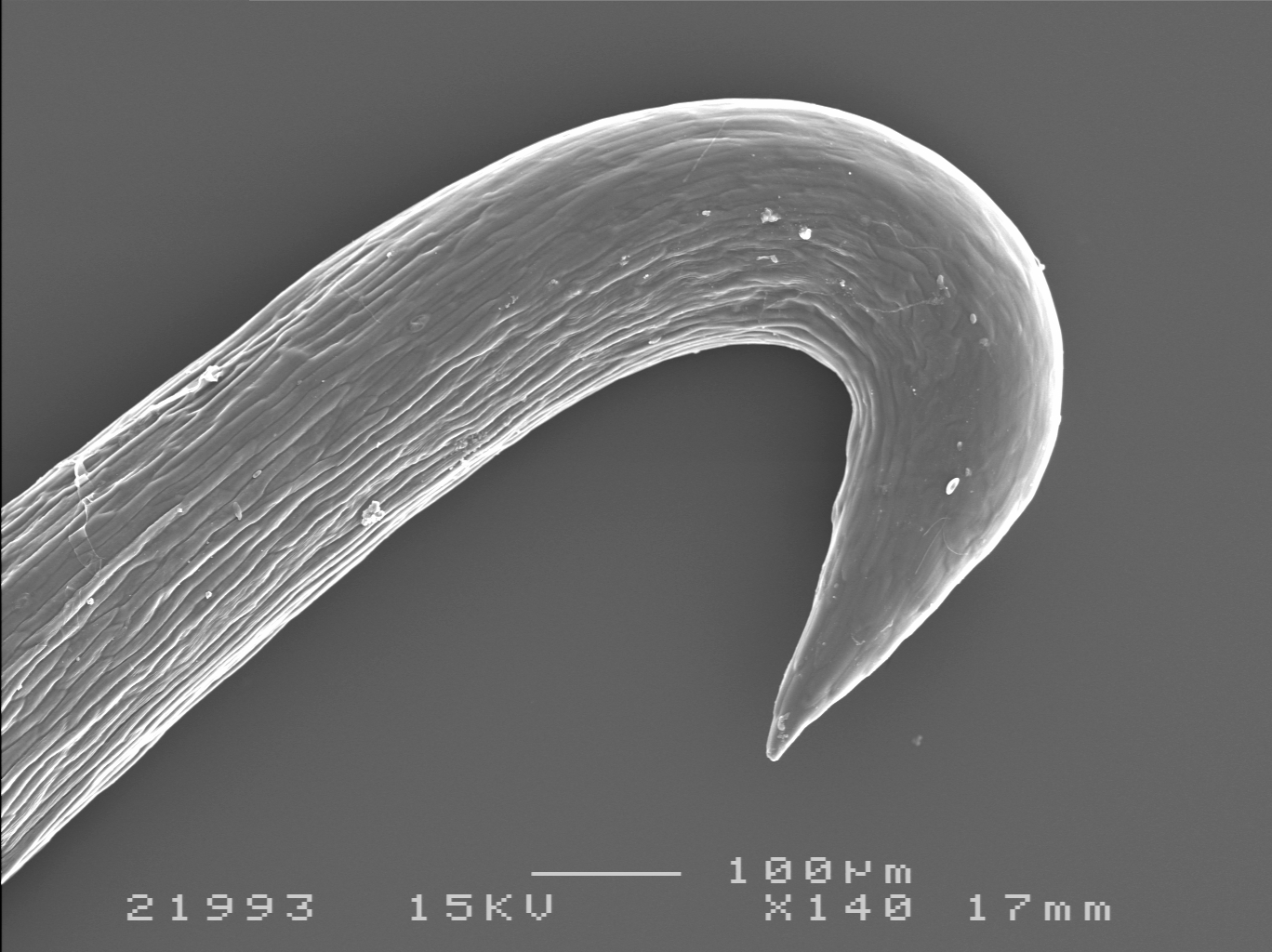 In the image above you can see the burdock seed and its signature hook, the inspiration behind the creation of Velcro.

This principle was easy to understand. But now de Mestral needed to replicate the phenomenon using manmade materials. This at first proved a more difficult task than expected.

Manufacture of the hook component presented significant hurdles. Specifically, it wasn’t easy finding a fibre that would retain the shape of a hook. (In comparison, de Mestral had no trouble solving the loop part of the equation.)

Blended nylon and cotton—in 1955 an innovation still in its infancy—provided exactly what de Mestral needed for his hook. Using NyCo, he handcrafted small hooks similar to those of the burdock seed. With that, he created the first successful hook-and-loop closure system. Get more intel on what makes NyCo suitable for this application in this blog post.

However, despite the ingenuity of this new closure system, Velcro struggled to gain acceptance following its market debut in the 1960s. Because it was ahead of its time, the idea was rejected by major manufacturers. That changed when the U.S.’s National Aeronautics and Space Administration (NASA) adopted the technology for its Apollo moonshot missions.

NASA found Velcro brand products effective for anchoring equipment in zero gravity. And just as happened with NASA’s embrace of Teflon (today mostly used in nonstick cooking pans) and of Tang (a powdered orange-flavored drink developed by General Foods), Velcro blasted off from obscure gimmickry to space-age tech now taken for granted as a routine part of our everyday lives thanks to the role it played in putting humans on the moon.

Velcro hook-and-loop fastener was invented in 1941 by Georges de Mestral. He secured the patent for this type of closure system in 1955.

How to clean velcro?

The best way to clean Velcro is to lightly scrape it with a brush or fine-toothed hairbrush. You can remove larger objects like pine needles or small branches with tweezers.

Alternatively you can remove dirt and debris with a strong taper another velcro strip.

How to make velcro stick again?

If Velcro is not maintained properly it can lose its sticky properties. If the hook section has degraded over time and lost its signature “hook” shape, by straightening out the fibres or breaking them, there’s no way to repair a damaged strip.

However if the velcro is not working properly because of dirt, fluf or debris you can clean it by following the guidelines above in “How to clean velcro?” section.

Velcro is commonly referred to as the hook-and-loop closure system consisting of two stips of specially constructed adhesive materials.

The first layer is the “loop” one consisting of countless “loops” designed to catch the counterparts from other materials and securing them in place.

The second layer is the “hook” section which is purposely built with numerous “hooks” designed to catch in any material consisting of “loops” that can catch them.

How does velcro work?

All hook-and-loop systems are based on the same principle.

They consist of two strips of specially constructed materials. The first strip is layered with countless tiny loops designed to receive and hold the equally countless small hooks layered over the second strip. Once the two strips are brought together, they adhere with considerable strength and can only be separated by use of sufficient force to pull them apart.

The microscope image below offers perhaps the plainest explanation of this mechanism. 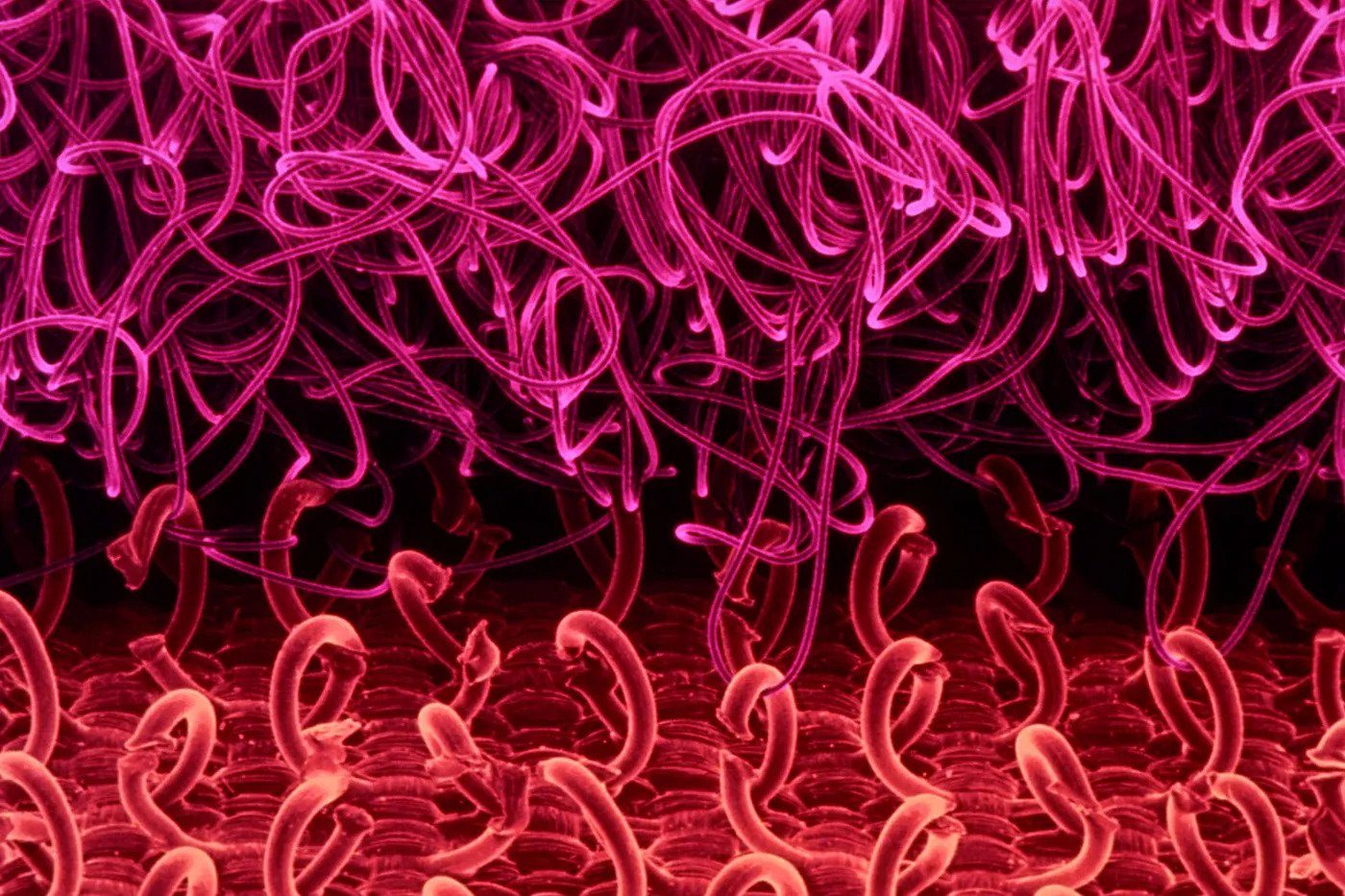 Microscope image clearly showing the two elements—hooks along the bottom; loops up top.

The strength of the two joined sides is however subject to multiple factors:

Velcro has properties applicable to and valuable in the tactical field. Specifically, this closure system is:

Easy to open and close. It can be opened with gloves on. It can be closed without having to search for the exact spot where the strips are located.

Potentially self-closing. This is beneficial because you normally want your pockets closed to keep your gear from coming out and there will be times when you forget to secure the flap.

Ideal for adjusting the fit. Belts, plate carriers, and the like may need to be personalized to the operator in order to be optimally useful, and Velcro closure systems make adjustability possible.

Available in FR variations. This is important for the tactical space because of the keen interest in personnel safety. Standard hook-and-loop systems are not no-melt/no-drip. That’s a concern even though they are never used directly on skin. However, the concern can be addressed by adding no-melt/no-drip clothing layers.

Despite being a great all-round system, Velcro has some downsides for the tactical space. These include:

Compatibility of different brands. Operators like to affix patches or other gear, but they can encounter problems getting those items to properly adhere if the hook strip comes from one vendor and the loop strip from another.

Noisiness. Opening a Velcro closure emits a loud sound. It can easily be heard by others in the vicinity (potentially compromising your tactical advantage if you’re trying to go undetected). However, there is a quiet system worth mentioning. It uses a unidirectional hook component and you can read more about it in this article by Soldier Systems.

Unavailable in some camouflage prints. Unicolour Velcros break the camouflage’s pattern, which makes you easier to spot.

Now that we’ve become better acquainted with Velcro, let’s consider the main alternatives to it.

Compared to hook-and-loop, buttons do not eventually lose strength. Nor does weather affect them.

A big question raised by magnet closure systems is whether they’re capable of triggering IEDs or interfering with your compass, GPS, and other critical equipment you carry.

The results of field experiments suggest such problems are unlikely. The magnets used in closure systems are not really strong enough to have an effect on detonators and electronic devices.

However, in the course of writing this post, we tested the magnet closure system of a Lindnerhof Taktik underbelt for its effect on a compass. Held 15 to 20 centimeters from the belt, the compass needle did appear to be influenced by the magnet. But in practical application, you’d never hold your compass that close to your belt—it would make use of the device too awkward. 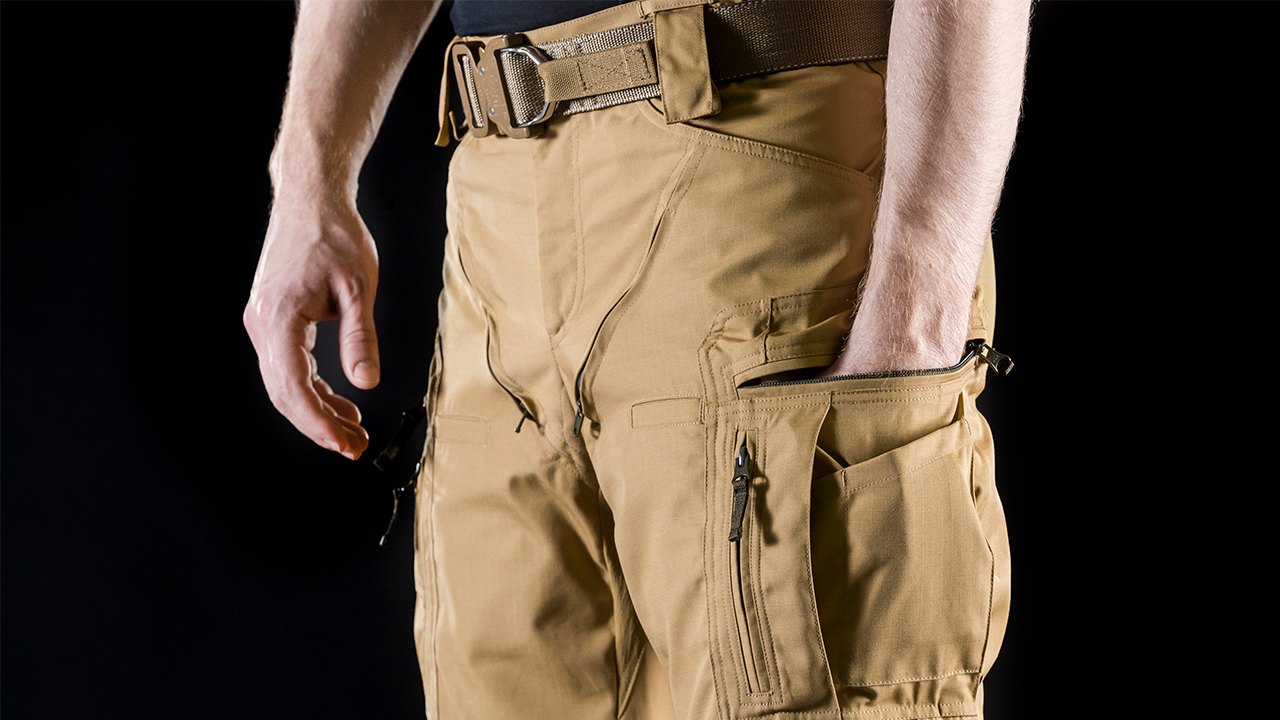 We use zippers a lot in our clothing and think they’re a better overall closure than Velcro for pockets and the like. Zippers are most advantageous if installed where they have to be pulled up or down rather than side to side.

What makes them particularly so is the ease with which they can be operated. You don’t need to make sure the closure components align properly before bringing them into contact—as long as they’re even just kinda-sorta aligned, you’ll be in good shape.

Another attribute of this type of closure system that makes it a winner for tactical operators is the adhesion strength of the strips. When they’re working properly, the two components absolutely won’t separate until you pull them apart.

This isn’t to suggest that Velcro closure systems are perfect. They’re not because they have drawbacks, as we’ve discussed.

That said, Velcro/hook-and-loop closure systems are ideal in the right applications. And, for that reason, they are here to stay.

THE BIG BREAK DOWN OF CLOSURE SYSTEMS