The day that top sign saved the track | Pro's Storytime

Up to this point, the Tracking Fundamentals blog series has presented exercises you can practice to become a better tracker. In this post, author Boris Vos shares a story from a real operation—a story that demonstrates the need to keep your wits about you at all times, to be able to think on your feet, and to be armed with plenty of tracking knowledge.

In absolute darkness and silence, I slid out of my hammock, took off my dry night clothes, and put on my stinking, dirty, wet day kit. With zero visibility under the layered canopy of the Southeast Asian jungle, I packed my hammock in my rucksack by touch. I put on my webbing, slung my SA80, and made my way to my stand-to position, using my hands to feel the way ahead.

I eased silently into a prone position next to a large hardwood tree, and observed into the darkness, knowing without seeing them that my other team members were doing the same, completing an all-round defense. We’re on Day Three of tracking four Gurkhas through the Labi. 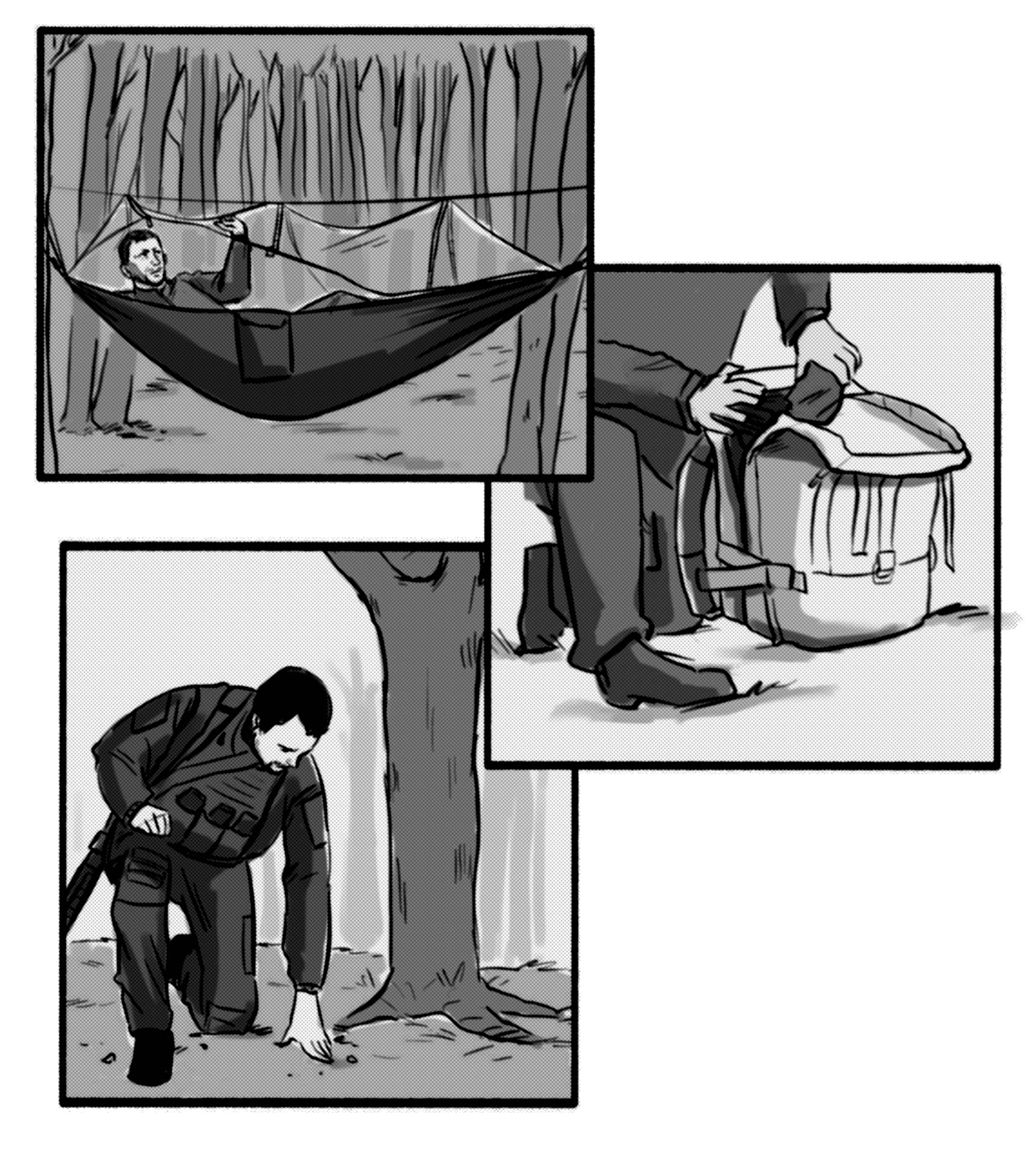 Day was initiated by the soundwave of hundreds of thousands of cicadas announcing that sunlight had hit the top of the jungle canopy.

As the light got closer, so did the sound. And as the soundwave passed overhead, the darkness in front of me started to transform. Darkness became shades and shades became shapes until the trees, bushes, leaves, and vines became clear in their green and brown splendor.

A slight rustling behind me indicated my team leader was shifting his position. I slowly looked over my shoulder and saw his hand signal: “Move out.” I got up, made visual contact with the man to my left and right, and started moving toward the track trap 75 meters away, right where we had the previous day abandoned the track. I quickly reestablished the sign, passed the hand signal “on track,” and started going through the five-step track-pursuit drill, my coverman at my left shoulder. Not a word was spoken. The hunt was on.

After 20 minutes, and as the damp heat increased with every minute passing, I suddenly stopped. Something had changed in the track picture. As I let my eyes explore my surroundings, I saw an increase of sign and disturbance on the jungle floor: Multiple areas of flattening, where people have sat or laid down. This could be our quarry’s overnight halt.

I gave the hand signal for “incident site drill” and quickly the team formed an all-round defence. My team leader and I started circling the area, careful to not destroy any sign, eyes peeled for any threats in the wall of green around us. We quickly found the exit tracks of our quarry and confirmed the direction they had gone. 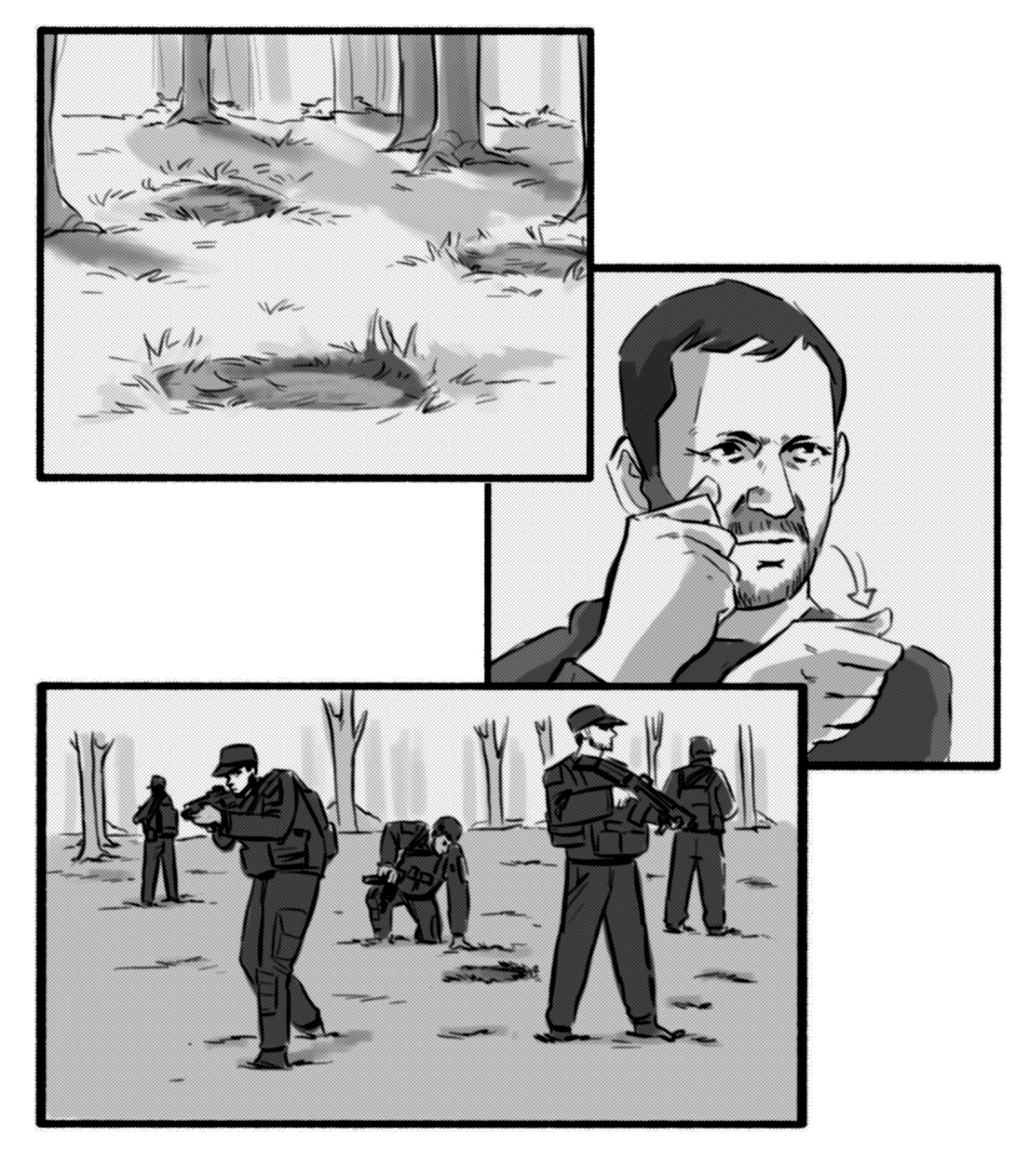 On closer examination, we determined this was indeed our quarry’s overnight halt. On the ground, four areas of flattening indicated the Gurkhas and their backpacks. Four distinct areas, which were confirmed through top sign on the trees. We could clearly see the marks left by their four hammocks pitched for the night.

Confident we were still following the right quarry, we assessed the time-distance gap to be no more than two hours, resumed on track, and continued the pursuit. The quarry was moving up a spur toward a ridgeline bordering Brunei and Malaysia. The ground was covered with a thick layer of leaves, and I was now tracking on color-change alone.

Bornean bearded pigs were also using the area in the early morning, which slowed our tracking. I had to examine the tracks every time the pigs’ tracks joined our quarry’s track, which I did by picking through the leaf litter to the soil underneath. This was necessary because we could not continue on without first confirming the human tracks. 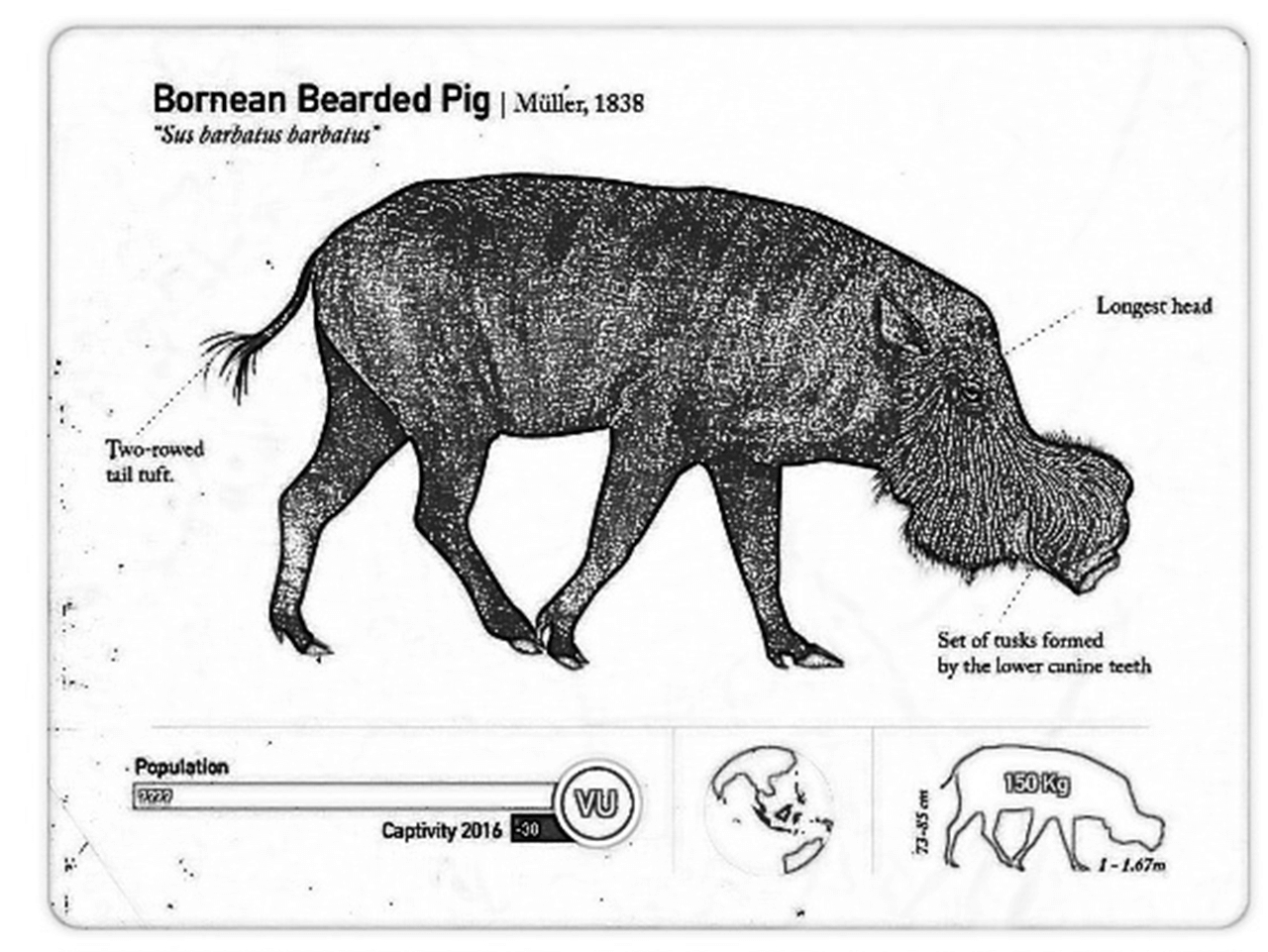 I was getting frustrated, wiping the countless spiderwebs that were between the trees from my face, sweating like the proverbial pig that was messing up my track. We were getting nowhere.

And then it hit me. The spiderwebs! Spiderwebs in this particular jungle were made by small spiders in the early morning, somewhere between 0000 and 0400 hours. There were thousands of them. The quarry had moved through the spiderwebs, clearing a path through them. 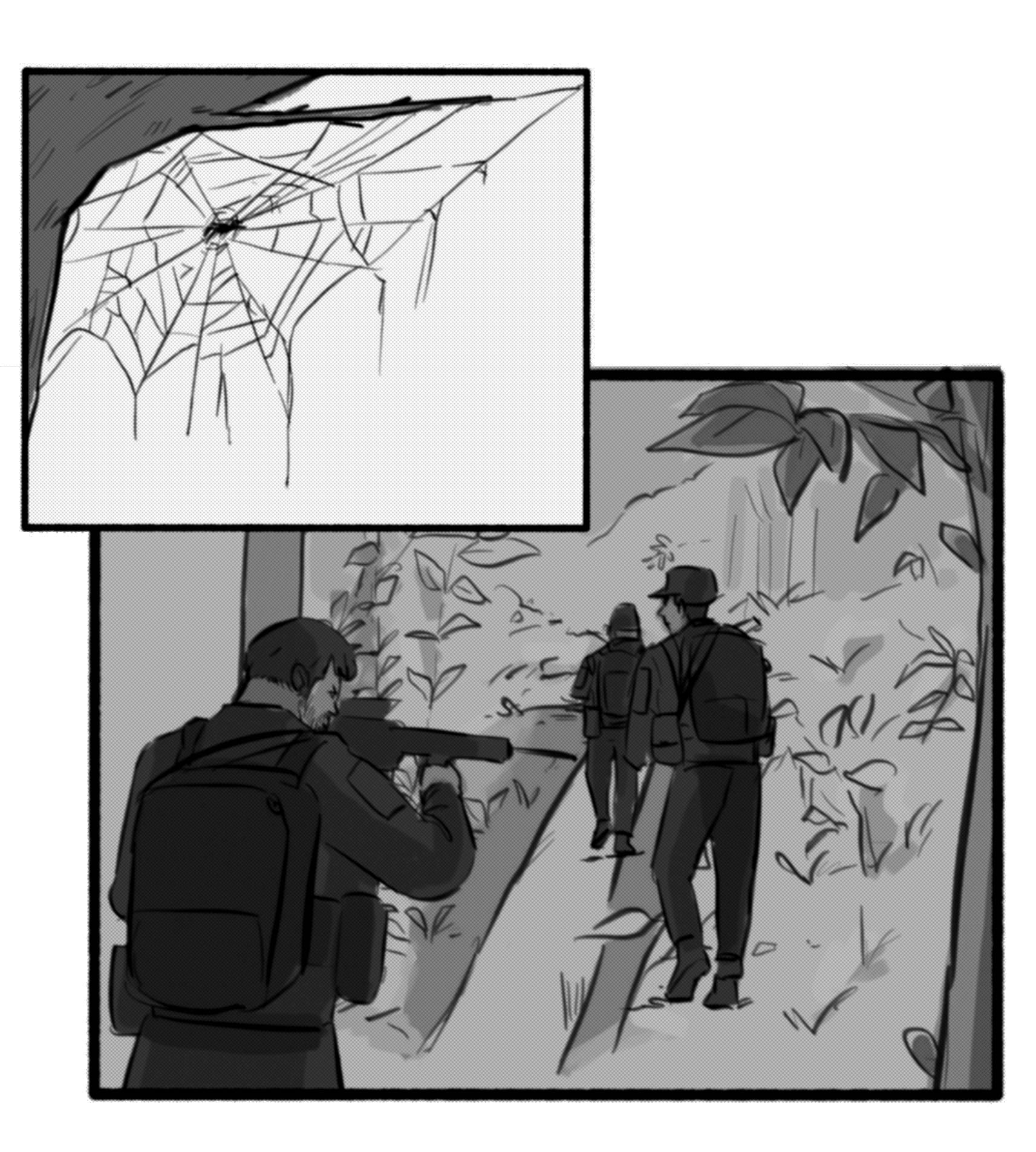 So, while on track, I would not feel any webs in my face. But as soon as I got on the wrong track (the one made by the pigs), I would again feel the spiderwebs cling to my face because the pigs as they passed through cleared away only the webs close to the ground, not those at my height.

With increasing confidence, I continued following the color change in the leaf litter. I knew I had gone off track as soon as I felt more spiderwebs against my face. Each time that happened, I’d stop and immediately get back on the right track. Top sign saved the day. We were back at it.

Until now we have been looking at so-called ground sign. Ground sign is any sign at ankle height and below, and includes the footwear impressions and any flattening of leaves and small vegetation (like grass). But if we rely on just ground sign, we lose a wealth of information and indicators about our quarry’s movements and actions.

Top sign is any sign from the ankles up, to the height and width of our quarry. This also includes any equipment carried—for example, a large rucksack, a radio and antenna, or a stretcher.

A person moving through thick vegetation will leave a top sign which is higher than, for instance, the Bornean bearded pig in the example above. You only disturb what you come in contact with.

So the top sign is a great indicator of the dimension of your quarry. It also can give you clues in quarry movements.

As a quarry is moving through dense vegetation, the branches and leaves are pulled in the direction of movement and may get hung up in the other branches (plants don’t grow naturally like this). When you encounter pulled or hung-up branches and leaves, the lighter underside of the leaves (color change) will often be exposed, making the pointers clear to see. By examining these pointers, we can confirm the direction of travel. By assessing the height at which the branches are affected, we can rule out tracks made by some of the wildlife (pigs, for instance), which are not the same dimensions as those of humans. 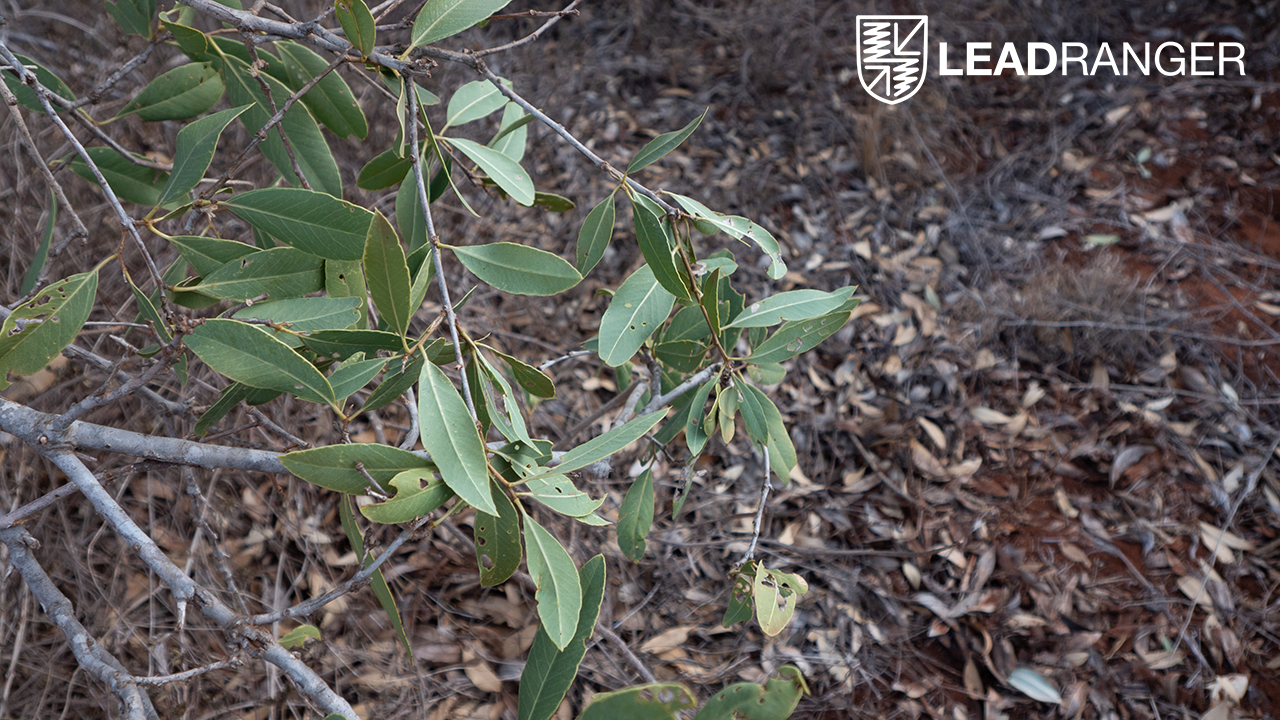 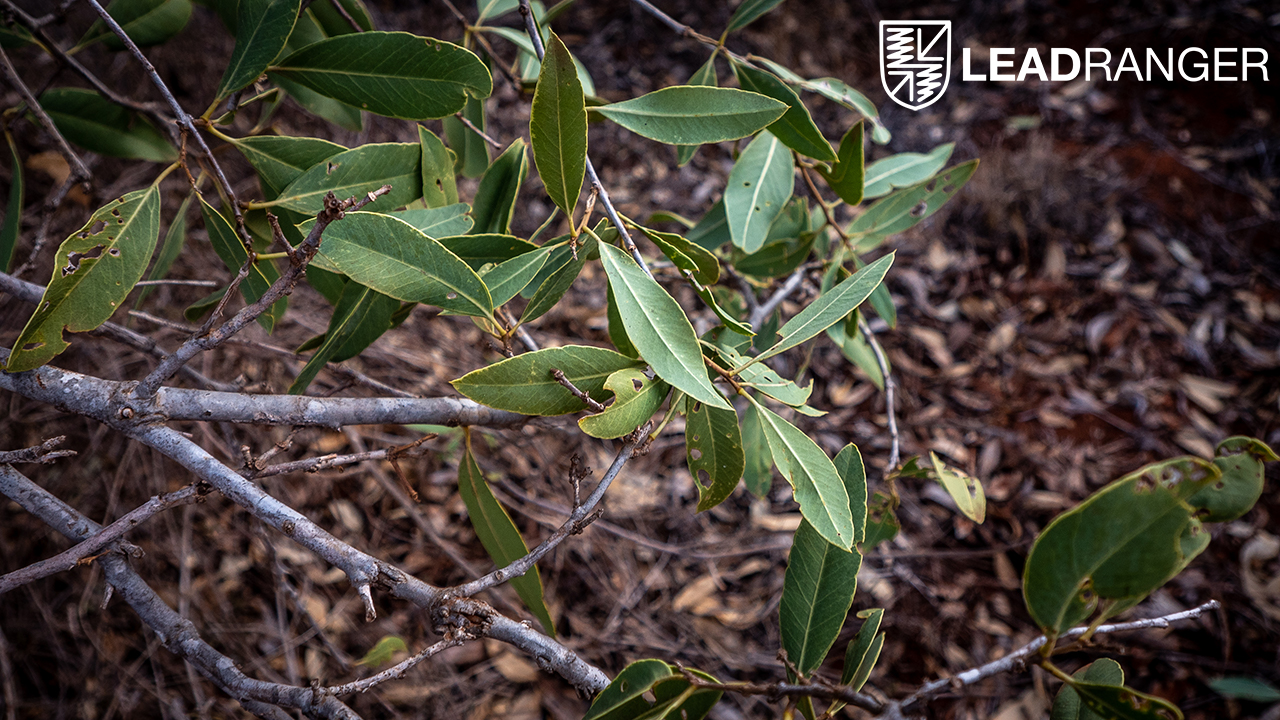 Clothing or equipment can catch on some types of vegetation (like the infamous “wait-a-while” with its rugged, sharp thorns) and on barbed fences, leaving behind small fibres of material. When you find these, it’s another great confirmation that you are on the right track. And, if you’re in the forensic business, the fibres may even reveal information about the clothing or equipment used. Other things may rub off on vegetation—including camouflage cream or blood—which can reveal even more information about your quarry. Attention to detail is key!

Leaf litter refers to the layer of leaves and the decomposing compost beneath it that cover the ground in most deciduous forests, whether in temperate or tropical environments. When you walk on such a forest floor, you will notice it is quite bouncy. The bounciness absorbs much of the impact of a person walking, and therefore will not yield the same amount of regularity or flattening that you might encounter on sand or dirt. An exception is when the forest floor is very wet. Then the weight of the water will keep the dead leaves compressed, and you may find some great footwear outlines. For a tracker, that’s payday.

If the forest floor is dry, you may find you are tracking on color change alone (as in the above example). Next time you are in a forest, pick up a leaf and examine it. You will see that the top is lighter than the bottom due to sun bleaching and, at the bottom, exposure to moisture. When a person walks on the leaves, the bounciness—along with some of the leaves briefly sticking to the footwear—will displace these leaves, exposing their darker underside. Most of the time it’s very subtle, but with a few pace-to-pace exercises on leaf litter you will be able to pick it up.

On closer examination, one thing you may see in the leaves is what’s known as a “straight edge.” The straight edge is caused by the folding (and sometimes breaking) of the leaves under the surface pressure created by the footwear or by the edge of the sole. This is indicative of humans and their footwear. A lot of wildlife, especially pigs and deer, have sharp hooves and will not create these straight, longer edges.

A great way to get comfortable with tracking in leaf litter and looking for top sign is to find an area of the forest where there is denser vegetation. You will often find such areas at the edge of the forest (in other words, next to open fields) where sunlight is able to reach the forest floor. Set up a pace-to-pace exercise for about 40 meters on the leaf litter and through the vegetation.

The pace-to-pace is performed the usual way. Here are a few pointers (pun intended) to help you on your way:

Repeat as many times as necessary to become comfortable with tracking on leaf litter and looking for top sign.

Time for a cold one! As always, take some pictures, tag us on Instagram (@rangerboris and @ufprogear) and let us know how you’re getting along with these tracking exercises. I’d love to see some photos of the top sign you come across. See you next time. Go get it! 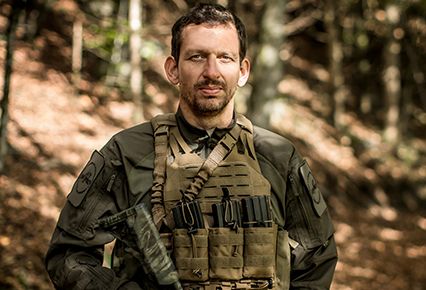 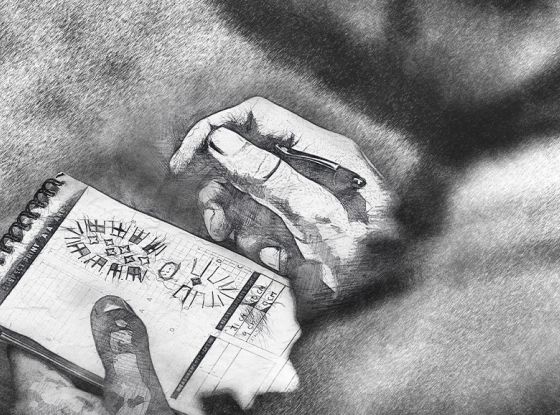 FUNDAMENTALS OF TACTICAL TRACKING | INFORMATION FROM A SINGLE TRACK FUNDAMENTALS OF TACTICAL TRACKING | SUN ANGLE—HOW TO UTILIZE IT