How to set up your battle belt | Ex-SF combat medic

What is the go-to belt set-up? I can’t quite answer that. All tactical ops aren’t alike; they require different gear and set up. That’s why there’s also not just one way to put together a battle belt.

I believe a sense of ownership is vital in every aspect of life, perhaps never more so than when it comes to “battle” belts. For every look there is a season, and for every season a strategy.

Saying that, flexibility is key. You will never be fully prepared with your gear.

Your mind might be prepared, but your equipment won't be. There are far too many variables that you must cover. It depends on your area of operations, specific missions, support, et cetera.

But there are still ways that—if you respect certain concepts—things might work out for you 80 percent of the time. 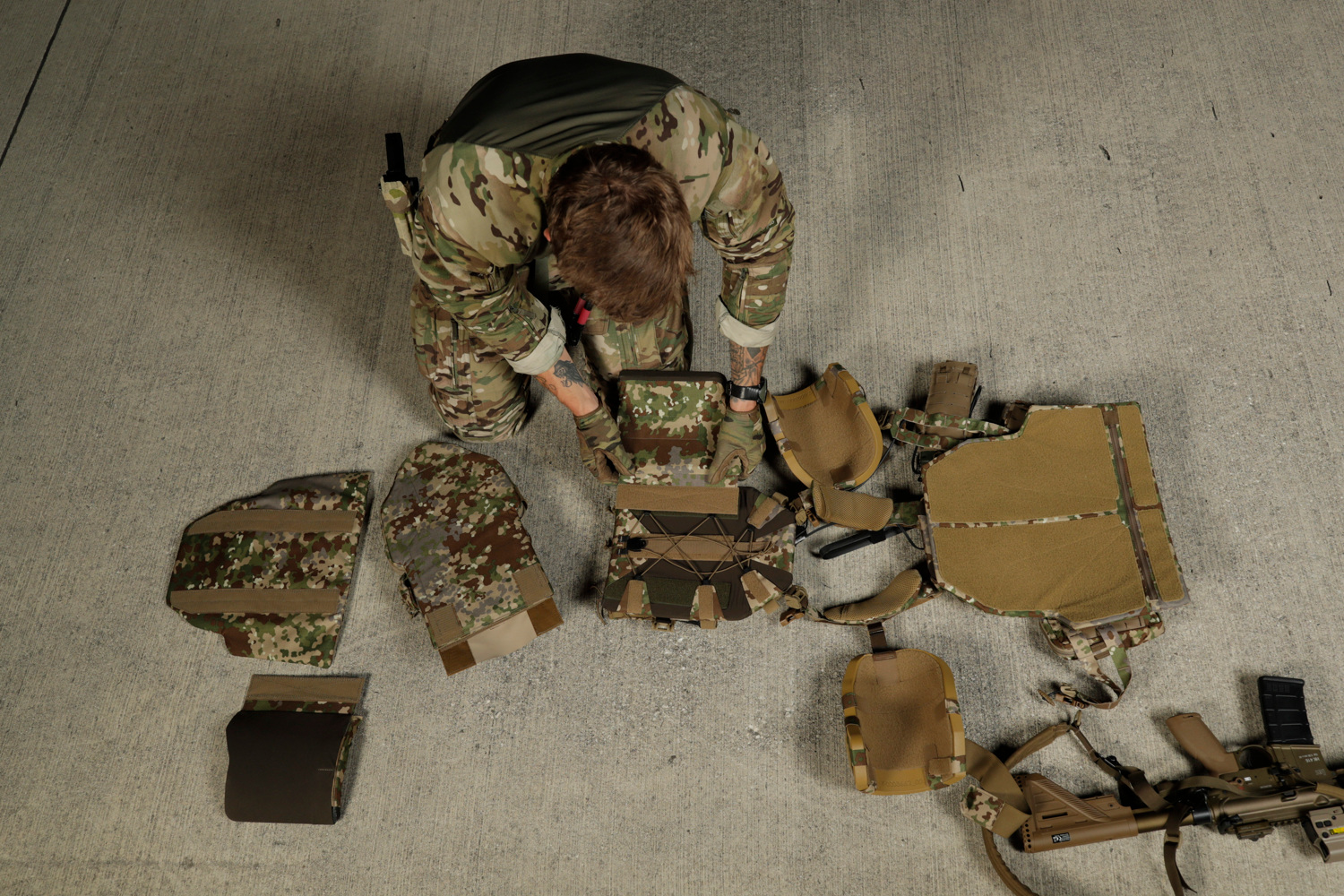 Theory behind the practice; essentials you need to cover

There are a couple of theories behind the practice.

The rest is user-preference manusia that in the long run does make a difference. But in overall aspects of day-to-day extreme work situations, not so much. A lot of extra heavy stuff on your belt systems just means that you are one of the tacticool guys, a new guy, or a gear whore.

Try to be a warrior with just the essentials, being able to perform on an optimal level and be more than just cool. A lot of extra stuff on you will slow you down, making you a bigger target or a liability.

Combat belt essentials should be: 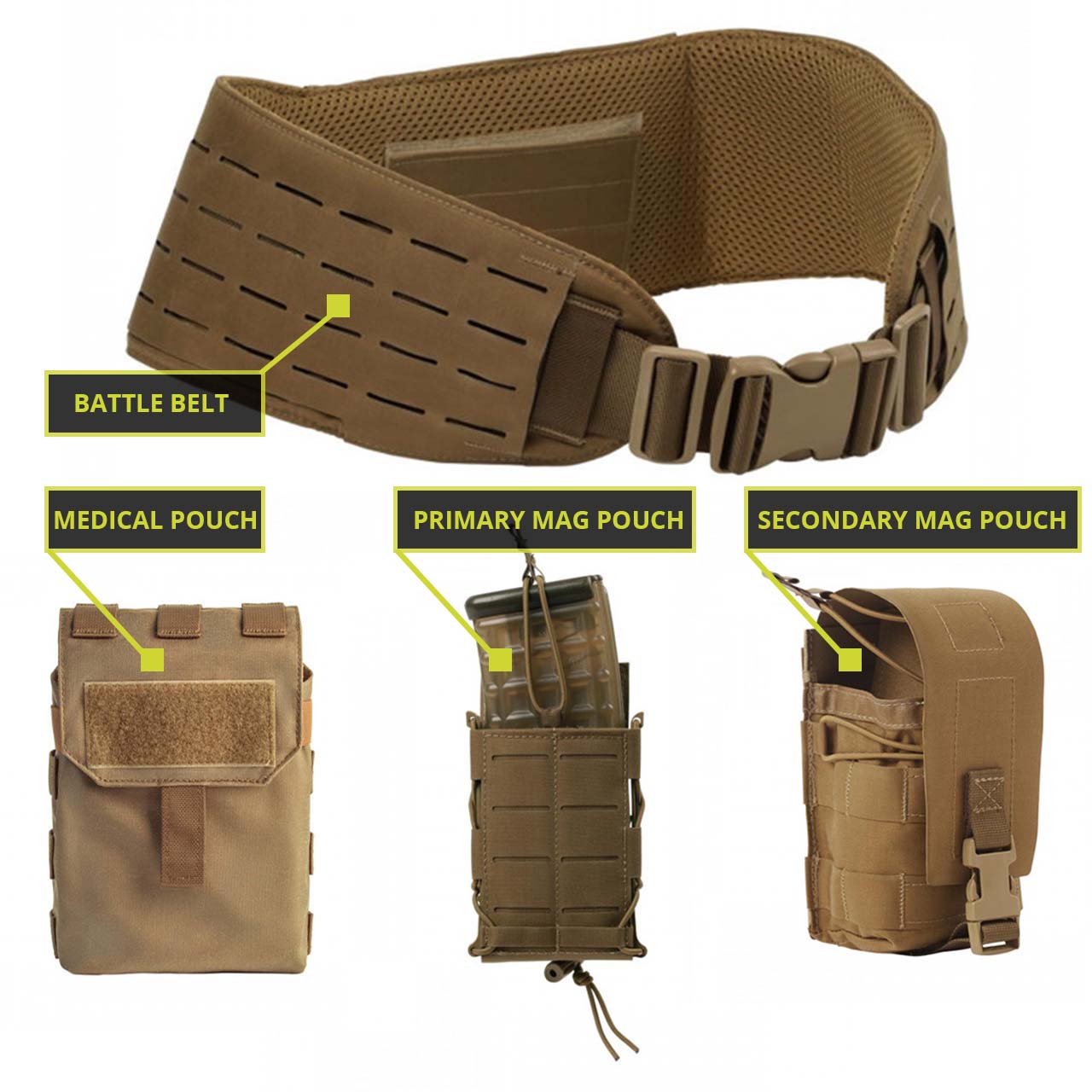 I’d add extra magazines for both your primary and secondary weapon systems (whatever those systems they may be) and store them away in a good magazine pouch that keeps them secure enough that you can tumble, fall, be strapped head-first on a rope, and your stuff won't fall out. An exact number of extra magazines? At least one for your primary and two for your secondary (because there can almost never be too many bullets).

Depending how you train (and if you go for your fast mag first), might I suggest that all the magazines on your belt be on the same side as the fast mag. Do this because it’s vital that you economize your movements as much as possible—in a stressful situation, your reptilian mind takes control and your hands need to be already knowing where to go for a magazine. Position the magazines in such a way that they won't hinder your reload but instead maximise your anatomy and physiology (to aid your reload).

Get a holster that properly accommodates your weapon system and anatomy. I am more for a drop-leg approach because that gives me better control of my gun. Some people with thick legs don't like that type of holster—beefy legs tend to hinder movement, especially with additional straps on them. My legs are thick, so I have a wider strap. But tactics are like assholes—everybody has one. If your preference is to carry a pistol on your thigh and it suits your needs, then go for it. But know just why you have it this way. And also test it on your belt.

Now for a bit of self love: medical gear—IFAK (individual first aid kit). Not a lot of messing around with this one. A gold standard IFAK should have: 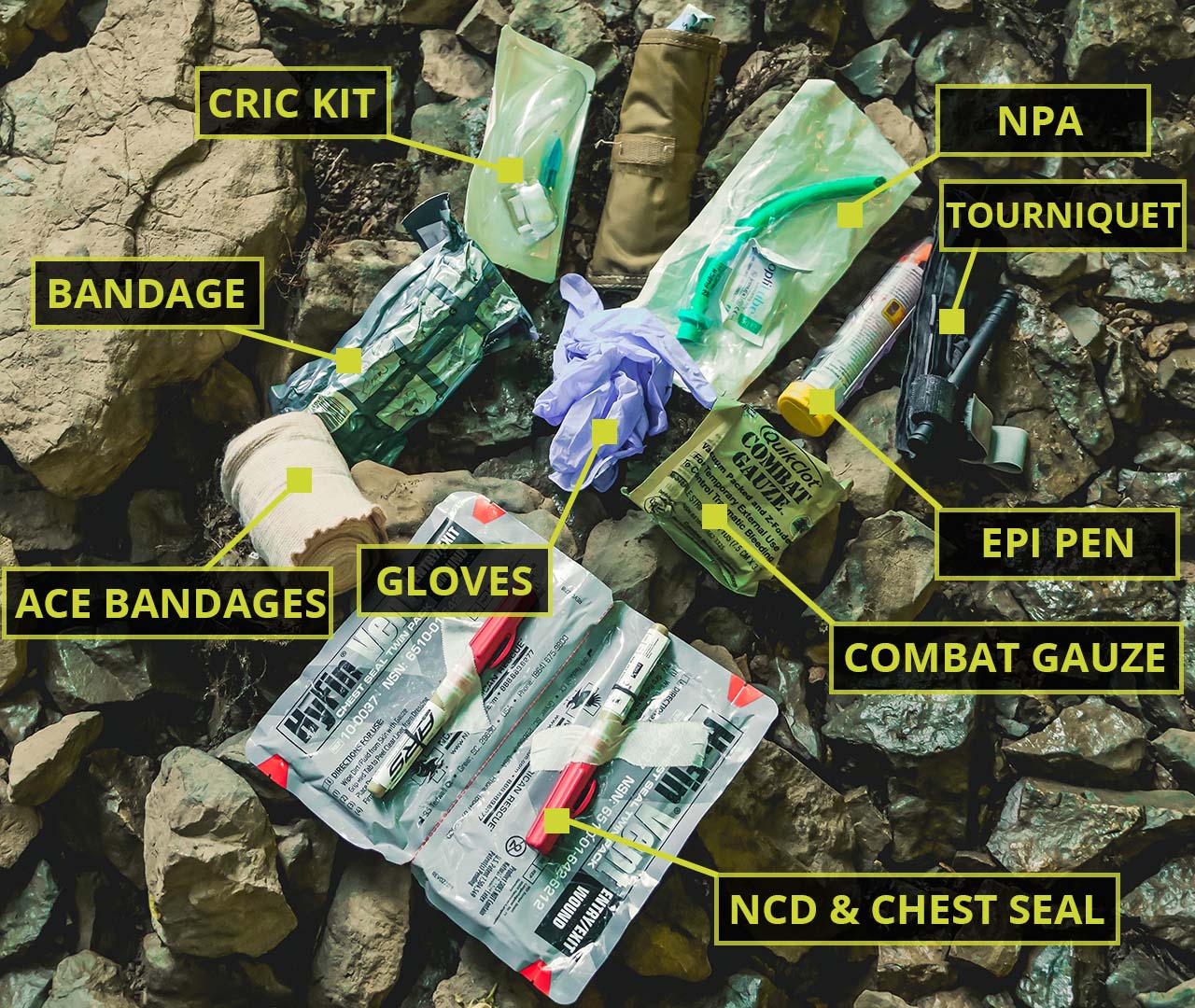 Also a good idea is to include a marker and combat casualty card (with your name, rank, blood type, and allergies already written in to make the medic’s job a bit easier).

Medical gear on you needs to be reachable with both hands. The rest is not that important, because you just can place everything in the middle. Things soon get too bulky. The medical pouch is going to be kind of big deal with it. You need this stuff. 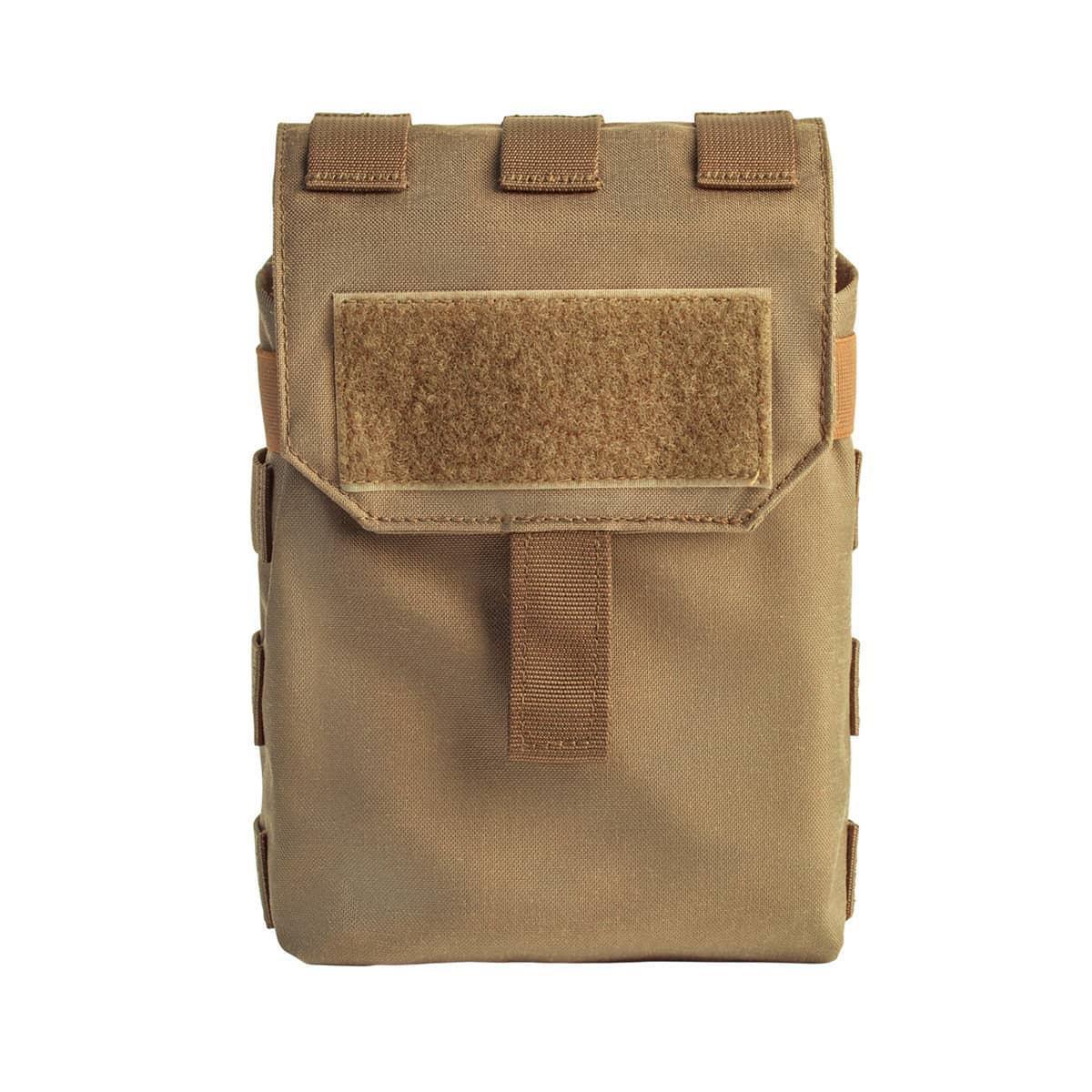 We made a video about it: Check it out. IFAK Essentials | How to Pack a Combat Medic Bag

The bare minimum is a tourniquet, one that’s COTCCC-approved. Anything less is irresponsible. Don't spend thousands on guns and then go cheap on a fake TQ. Position it horizontally on your belt, up front, so that it's in the middle where either hand can reach it yet it’s  also not quite in the way of things.

What kind of belt? Whatever suits you best. I like a double belt system, but more of that later. 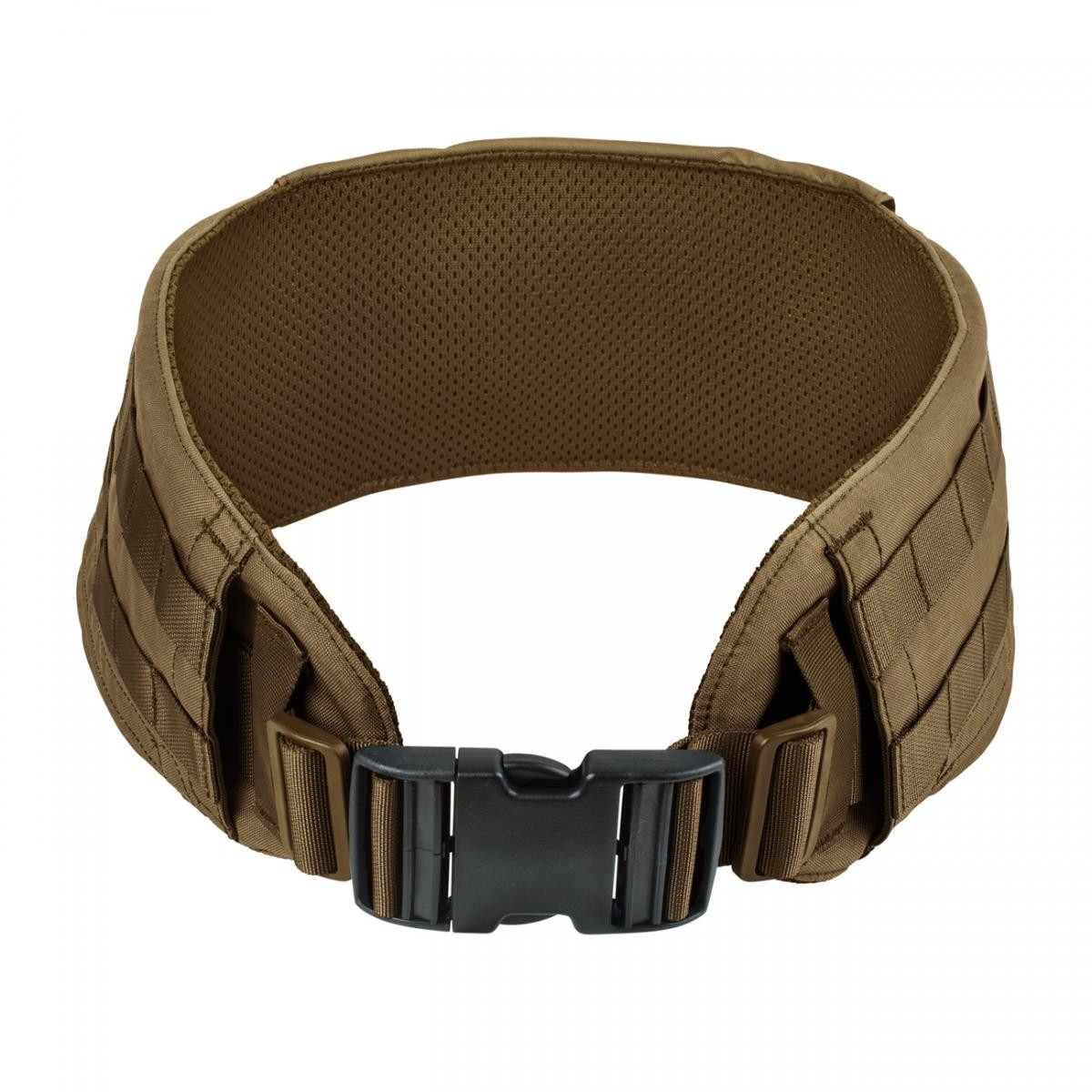 Shown above as an example is: Lindnerhof-Taktik Gürtel HL125

The practical approach, reality hits in...

Are you invading a foreign country? Fighting the cartels? Launching a covert military operation in Cuba? Depending on what you’re doing, the equipment needs to be there to give you a bit more operational space, flexibility, and ingenuity.

I treat my combat belt as an additional logistical asset for my work. It's a spare, a reserve, which is how it should be treated—not putting on everything and anything.

Now that we know what kind of holster, magazine pouches, and medical gear we need, we’re able to move on to the practical approach. After you’ve worked long enough in the armed forces or in law enforcement, you soon realise that you don't just “make or plug holes.”

A lot of missions, extra work, duty, unexpected events that off-the-bat need improvisation. For these situations you need more equipment. A warrior is ill-equipped if he does not have a: 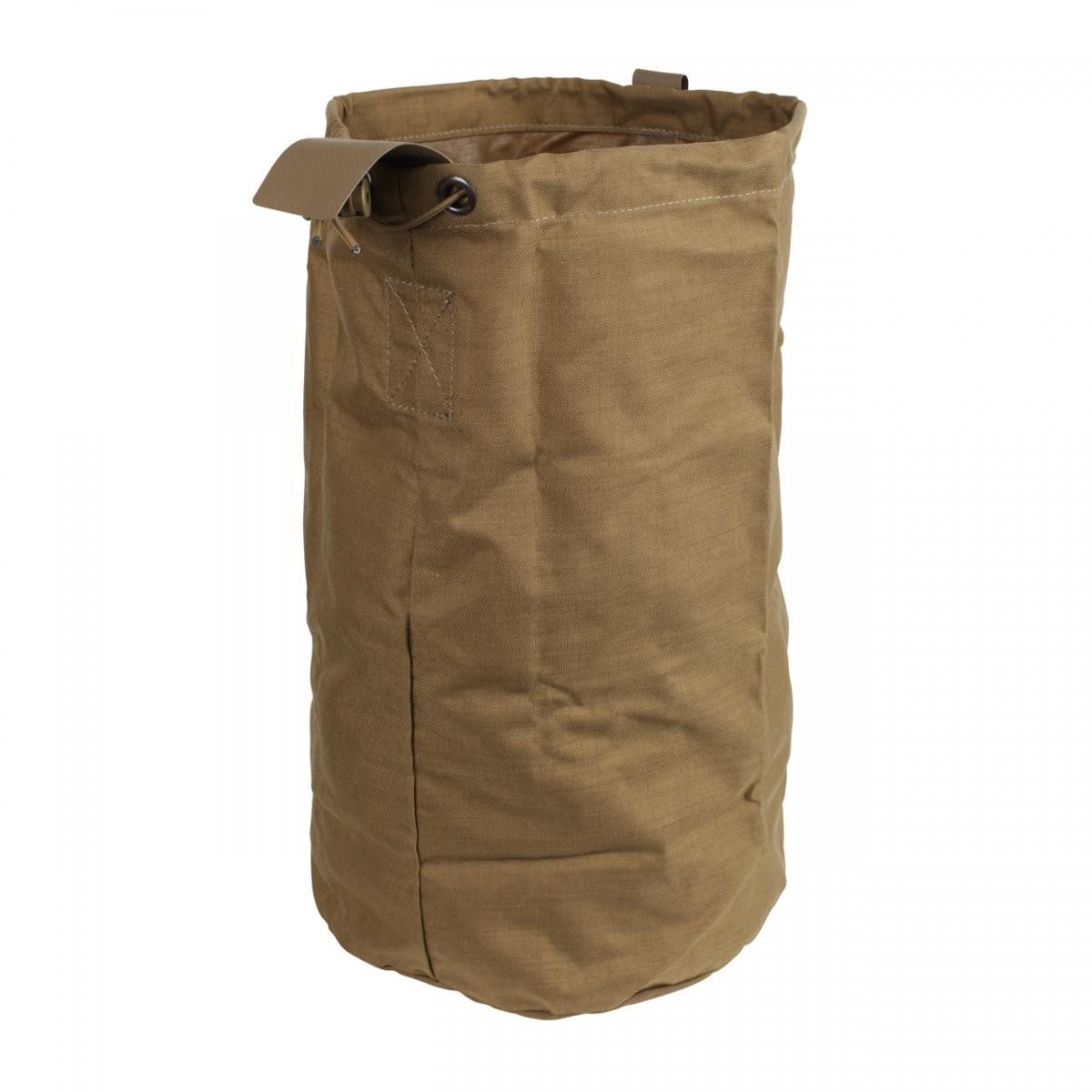 Shown above as an example is: Abwurfsack Gross HL056/2

In addition to those items, get an admin pouch to store them all. Practice depends on whether you are spending your own money for equipment or if your gear is instead issued by your government. I always went to the middle ground. Military always chooses whatever’s cheapest. Since that tends to be not the greatest on the planet and I wanted the best for me, it was necessary to buy my own—but without having to sell my kidneys for all the stuff I “need.” 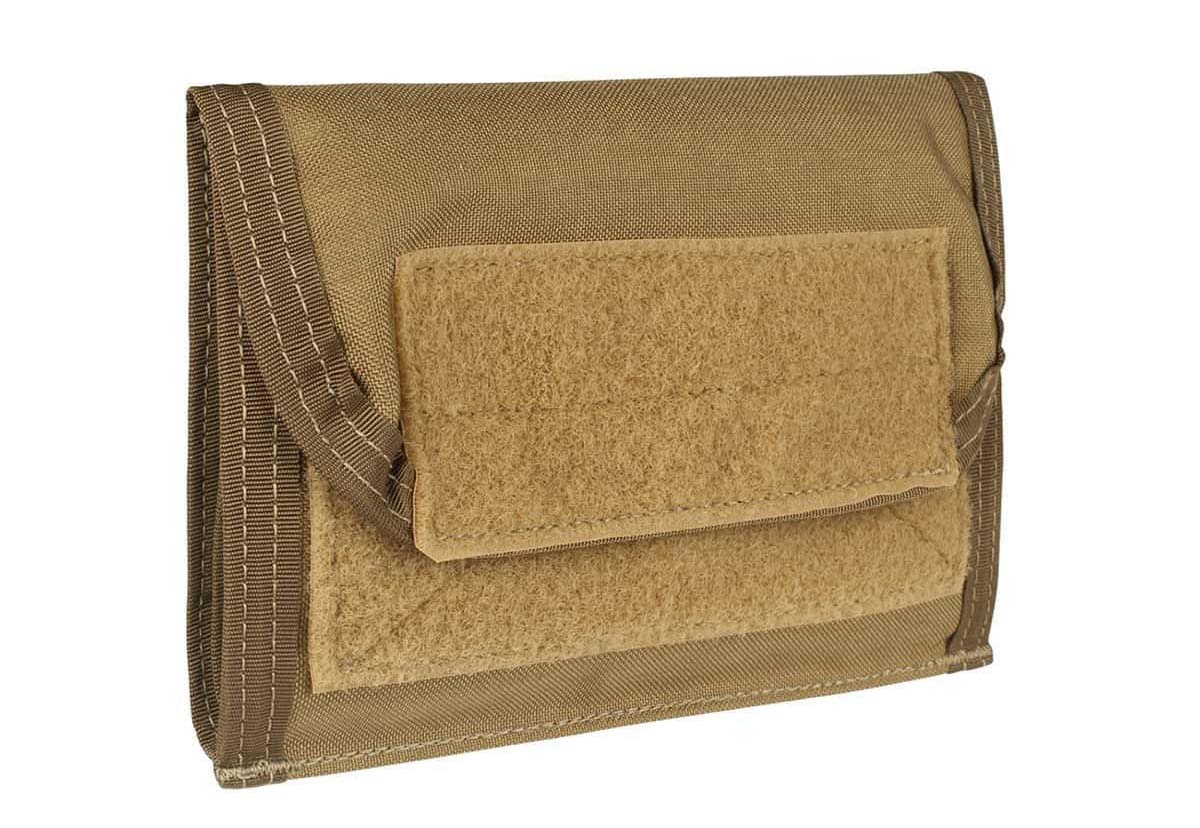 Shown above as an example is: Admin-Tasche HL117

Improvisation goes a long way. Make your admin bag as thin as possible, easy to get to, easy to close without breaking your arm or getting a sweat going. Has to be big enough to fit your needs so that you’re not always trying to cram things in and having to force it closed. Try to position it in the back, so that it doesn't interfere with your operational work. The admin pouch has to be in the back, hence the name “admin pouch”—administration has to come last.

Going on suspenders if you need suspenders. Chances are you are carrying too much weight, or have chosen a different tactic. Gone old school and wanted the British load-bearing look.

These things I prefer to carry on a two-belt system. Velcro comes to the aid so your gear is not jumping up and down or rotating around your waist like a hula hoop. Additionally, I'm talking about practicality, when you aren't in need of all your tactical gear.

You still have an underbelt holding your pants up. And how many times do you go to the bathroom and it's a pain in the ass removing all the straps if your belt is secured in a different way.

Rough guidelines are above and they are here only to give you a bit of food for thought. Depending on what you do, you need to adapt to your situation and what you need. 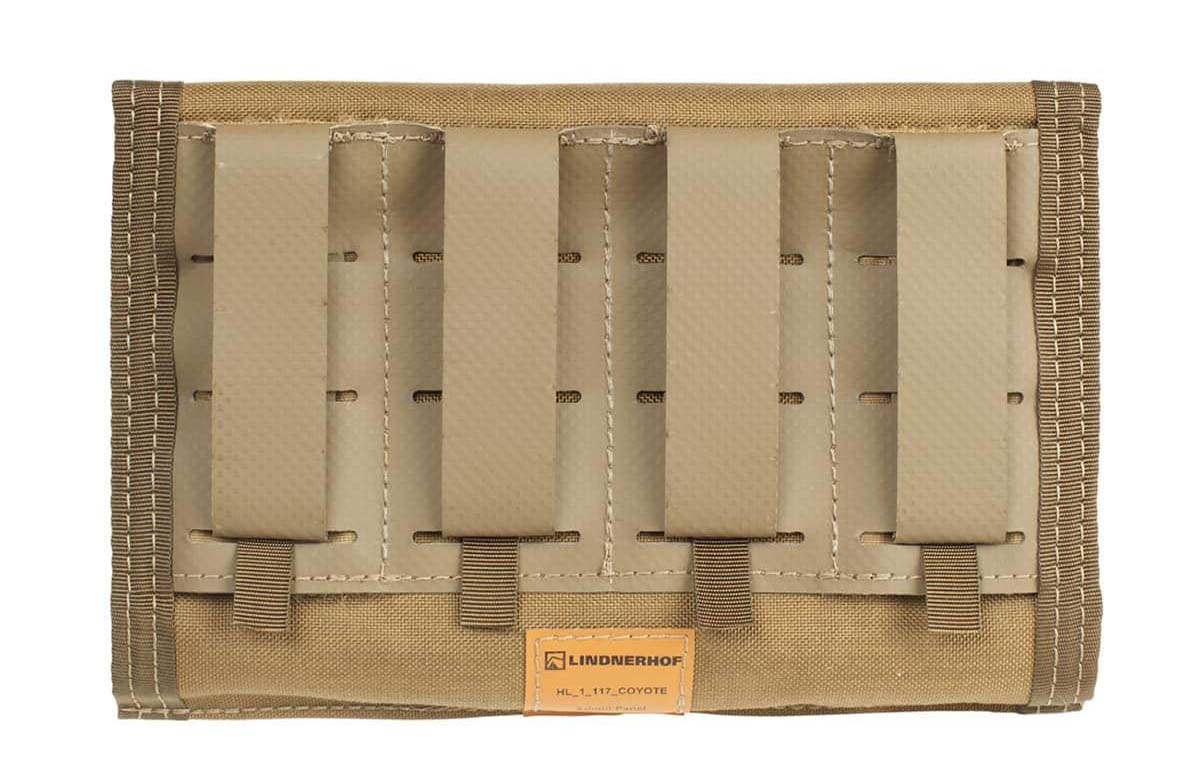 Shown above as an example is: Admin-Tasche HL117 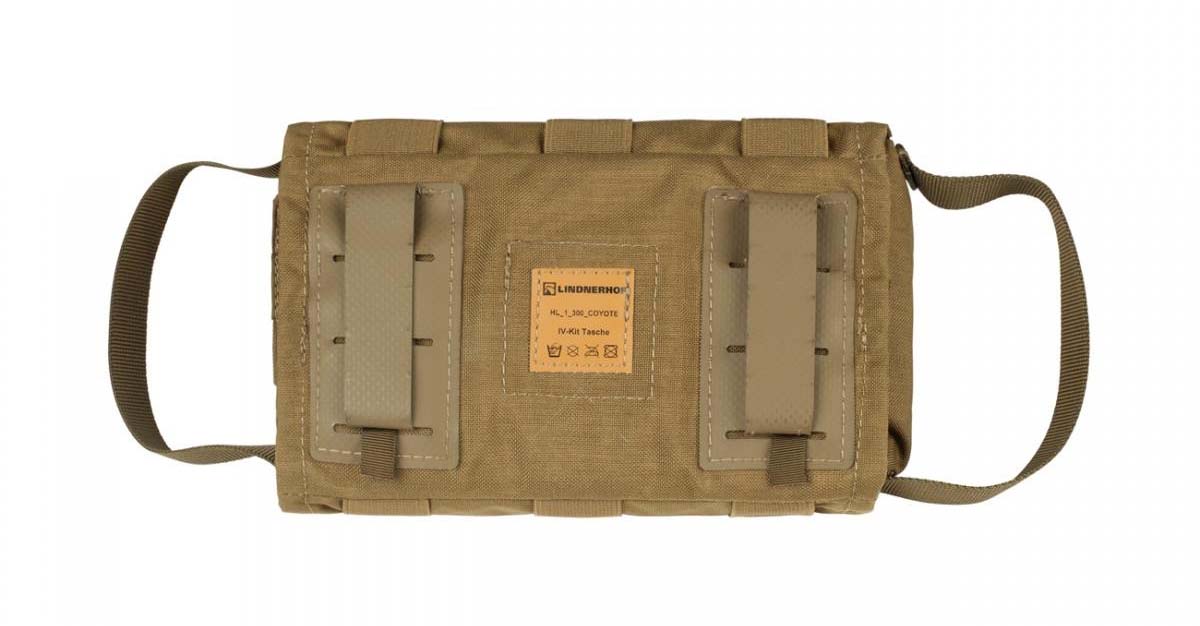 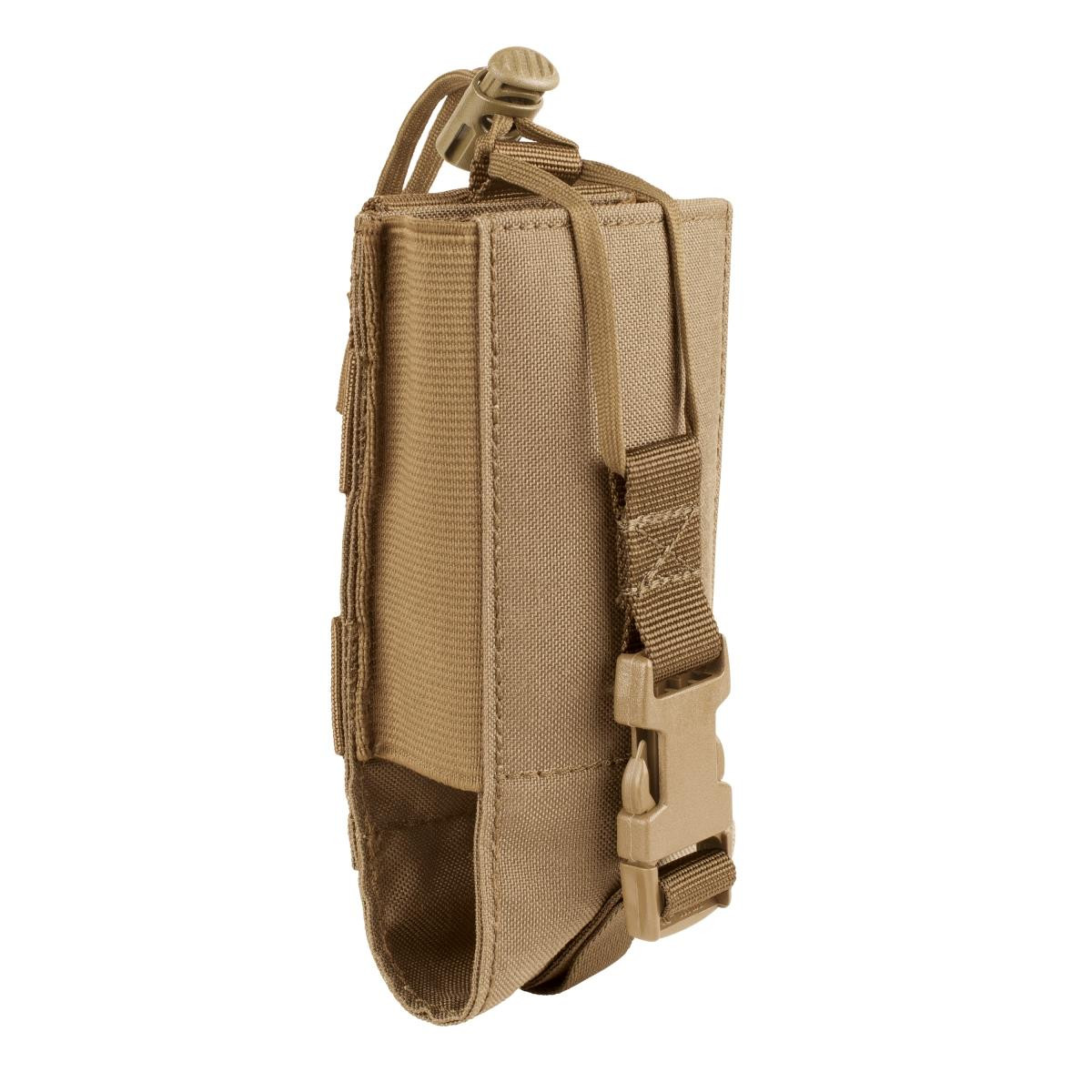 Shown above as an example is: Funkgerätetasche PA132 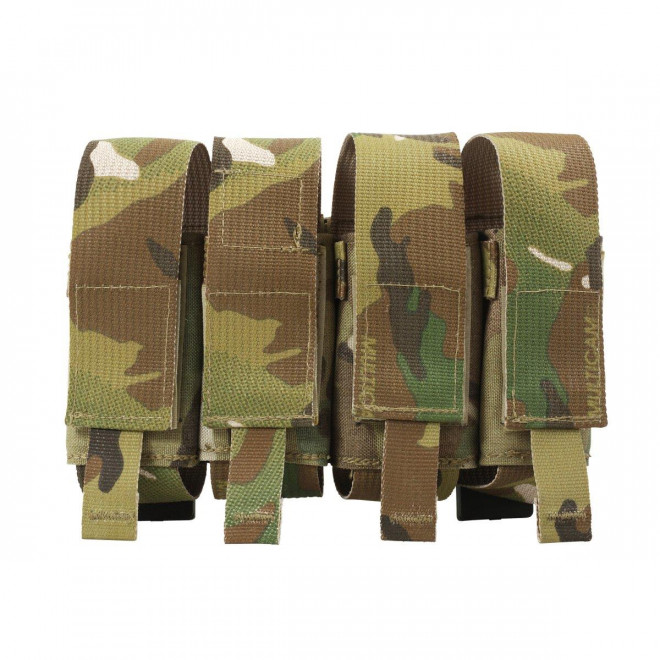 Spending some time on a helicopter, then you in addition need a retention lanyard. Don't want to fall off a helicopter. Well, probably you won't even be allowed to get on it if you don't have it. Do remove it when the helicopter is not in the mission plan—chances are it’ll get caught on something.

On a local range?

Well, what about when you are out and about in your civies. Sure, you can train as you fight. But if you aren't allowed to take your gear from your base, then probably you will buy your own gear for the range. Speaking of which, will you have the same level of support at your range as you have in the military? Train as you fight and the environment has changed for you.

Civilian “battle” belt is something else. Think about it, the world is at your disposal, not only the plain military colors. Limited military style equipment. Now you can improvise, adapt and overcome.

Have everything ready for when the shit hits the fan when you are at your house. Doesn't matter that you are high-speed at work—don’t be a sitting duck at home. Prepare your equipment accordingly. More about that in a later post.

Hope you enjoyed this blog post. Be sure to share, comment, critique. Help me learn with your comments, whatever makes you feel good. The knowledge and wisdom I have was given to me by people who made mistakes. They made mistakes because they were testing new stuff and found ways to make unworkable stuff work. I like following people who make mistakes. 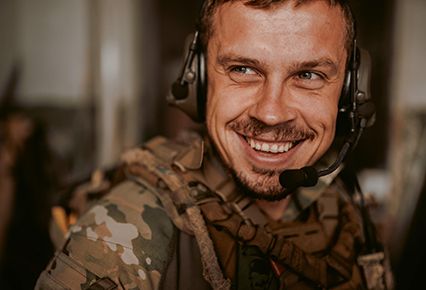 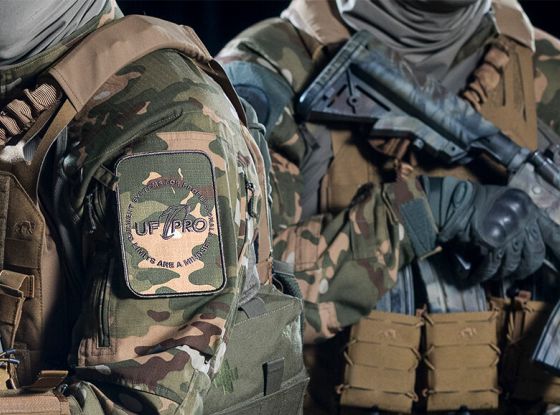 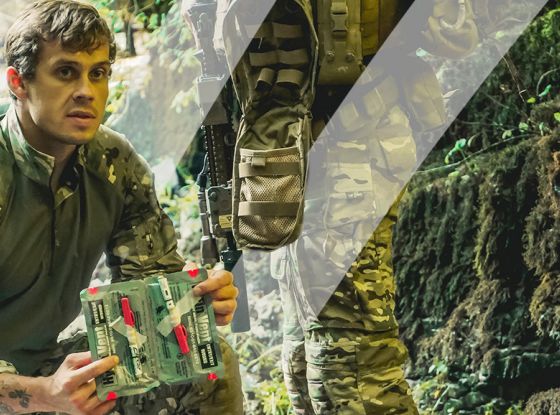 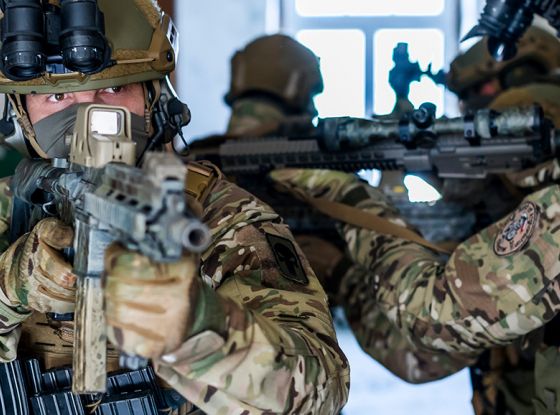