Tactical Velcro patches are recognized throughout the tactical community for their clearcut benefits. Chief among those benefits is the ability to easily identify who belongs to which unit. In this post we explore the history of tactical patches and review a few that are currently used in the field.

Nowadays, it’s rare to encounter an operator who isn’t wearing a tactical Velcro patch, be it one bearing a military insignia or a witty message.

Tactical patches serve a useful purpose. They permit easy identification of ranks. They can be personalised to suit the operator’s gear. Reflective coatings can be added to aid in distinguishing friend from foe.

There are many different types of tactical Velcro patches. There are also many different uses for them. The common thread among them is they all contain information relevant to others on your team, or even to you personally.

More than that, tactical Velcro patches can save lives. One way is they minimise the risk of the wearer being mistaken for a baddie and subjected to friendly fire. Another is they alert medics to deadly allergies a wounded operator may have to certain antibiotics and pain-relievers.

But before we dive deeper into the modern era of tactical patches, let’s take a look at some history and see how they came about.

Visually representing rank or distinguishing troops by unit is not a new idea. It’s been around since the dawn of military history, beginning with the practice of outfitting higher-ranking officers with better protection and adorning their armour with more aesthetically grand ornamentation.

However, use of military patches began only a little over 200 years ago. It was in 1810 that the British Army became the first to use badges to distinguish the rank of its officers.

From there emerged the need to create something easily distinguishable for enlisted personnel and, more importantly, for the various units and divisions. Among the first and most notable such identifiers was the “Kearny Patch”—a red piece of cloth affixed to the caps of the officers under the command of Brigadier General Phillip Kearny, U.S. Army 3rd Division, III Corps, during the early years of the American Civil War (1861-65).

Kearny ordered the patch be worn to make his troops more recognizable during battle (a good idea if you try to imagine a combat zone shrouded in the fog of war—or even in the fog of nature, either of which would make it difficult to differentiate at a distance troops wearing the same uniform).

The Kearny Patch proved to be an ingenious idea, enough so that other units copied it and developed their own versions. These came to be known as “unit insignia patches.”

Fast-forward a half-century. Another milestone for tactical patches is reached—the creation of a more personalised line of patches specifically for raising the morale of the troops. The first of these was the patch designed for the U.S. Army’s 81st Division “Wildcats” during World War I.

It was such a huge hit among the men and officers alike that General of the Armies John J. Pershing, commander of the American Expeditionary Forces on the Western Front, ordered all divisions to create and wear a unique patch of their own.

Then came World War II. In the Southern California city of Burbank, there were two militarily important installations. The first was the Lockheed aircraft factory. The second was the Walt Disney animation studio.

The U.S. Army stationed troops at Lockheed to make sure the factory was protected against saboteurs and enemy attacks. At the same time, Army officials streamed in and out of the Disney lot to oversee production of films and other materials deemed critical to the war effort.

During the war years, Disney produced for the military more than 1,200 colorful—and in many instances comically wisecracking—unit insignia patches, according to company records. The patches incorporated popular characters from the Disney cartoon universe (interestingly, five of those 1,200 unit insignia patches are still in use today).

Traditionally, soldiers secured patches to their clothing or gear by sewing them on, glueing them in place, or affixing them with pins. None of these methods was ideal for reasons of time waste and injury risk. And they certainly didn’t lend themselves to mass-production techniques so that clothing and gear could come directly from the factory with patches already affixed.

However, the picture improved with advances in mechanisation and the advent of nylon/polyester-based hook-and-loop fastener systems such as Velcro.

Velcro offered an optimal set of properties for tactical patches. When affixed to a strip of Velcro, patches stayed exactly where they were supposed to yet could be easily removed and swapped out. Also, Velcro made it practical to create customised patch shapes.

The evolution of hook-and-loop on it’s own was not enough, though. Patches received a huge boost in the 1960s thanks to America’s National Aeronautics and Space Administration (NASA), which made a practice of creating a unique patch for each of its space exploration missions. 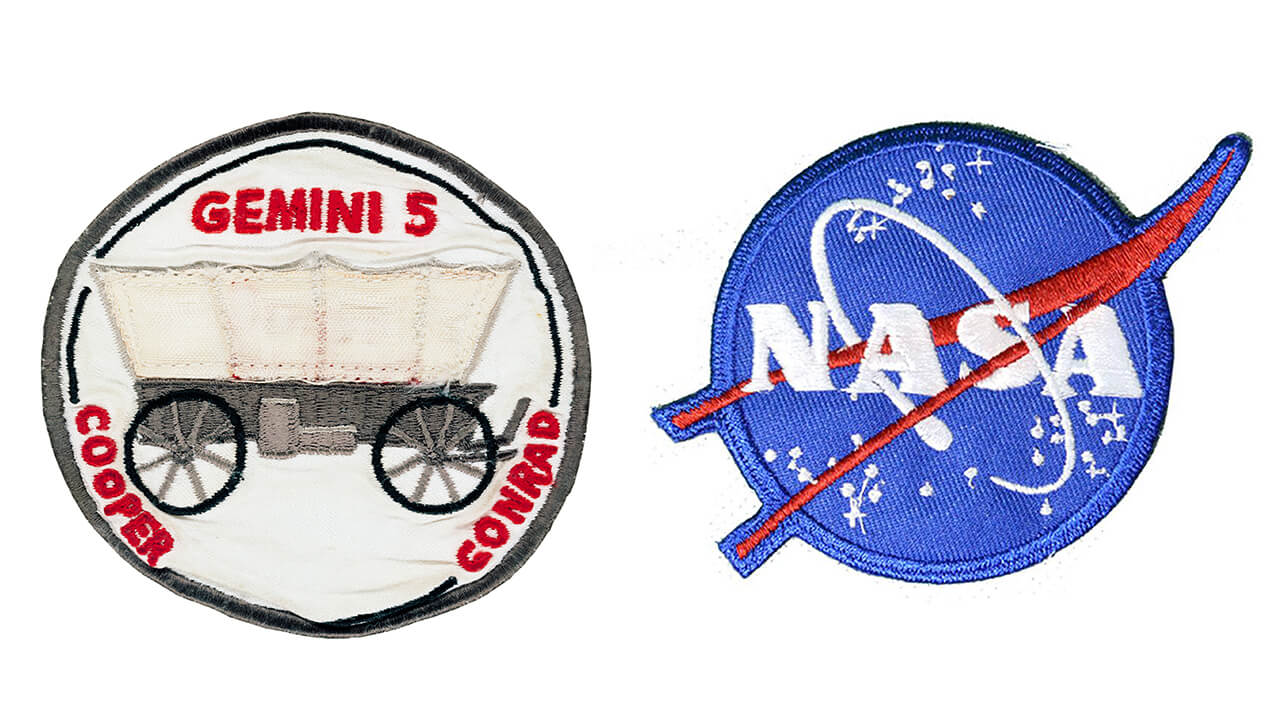 By incorporating Velcro as part of its spaceshots, NASA laid the foundation for tactical patches as we know them today.

Another interesting aspect of the history of tactical patches is their tradeability. The older a patch is, the more it is cherished by those who trade in them. As time has gone by, more and more patches—many customised and personalised—have been passed down from operators to collectors.

Patches come in a seemingly limitless variety of sizes and shapes. Some are made of PVC, while others are fabricated from woven materials and still others are fashioned by embroidery. All serve a specific purpose.

One way that we can classify types of tactical patches is by the information they communicate. Four such classifications would be:

Let’s have a closer look at each of these.

Covert tactical patches are those that emit a distinctive glow when viewed through special visual-aid instruments. Soldiers so equipped can instantly tell whether the troops way up ahead are friendlies or otherwise. To the unaided eye, the patches give off no glow. This glow effect is achieved by eliminating reflected light in the visible spectrum while retaining it in the IR spectrum.

Among the specific technologies used for this purpose are IR reflective (detectable by common night-vision devices) and  FLIR patches (detectable by thermal-imaging cameras). 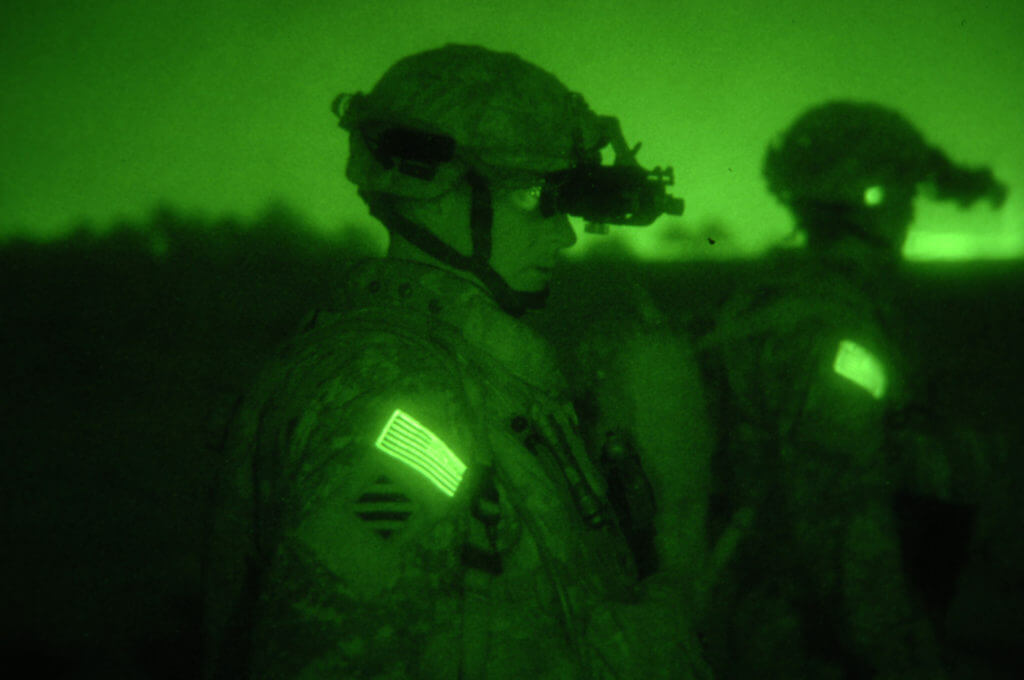 As shown in the image above, IR patches stand out when observed by a night-vision device. This is especially useful when wearing them alongside NIR-compliant tactical clothing.

Thermal imaging works similarly to NVG devices. However, if you are wearing a FLIR patch (and depending on whether you are using a white-hot or black-hot preset) the highlighting effect will appear as either a white or a black spot. 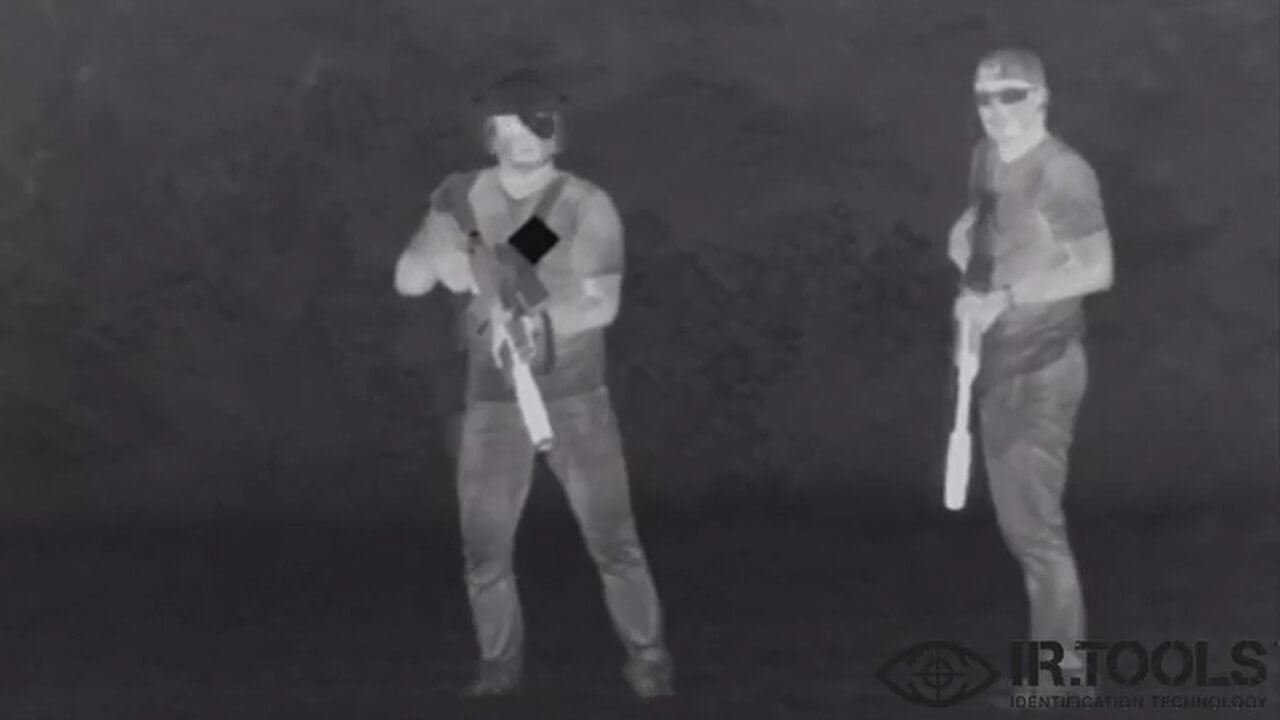 Image above displays a black spot of a FLIR patch.

Both systems have the same purpose: detecting and identifying friendly troops in an operating environment.

Unlike their covert counterparts, non-covert patches reflect the maximum amount of white light. This makes them easily detectable by the unaided eye.

Accordingly, non-covert tactical patches are useful in scenarios where operators do not need to stay hidden. Such scenarios would include missions in city environments, inside military bases, or at times when lighting is poor but identification is vitally important. 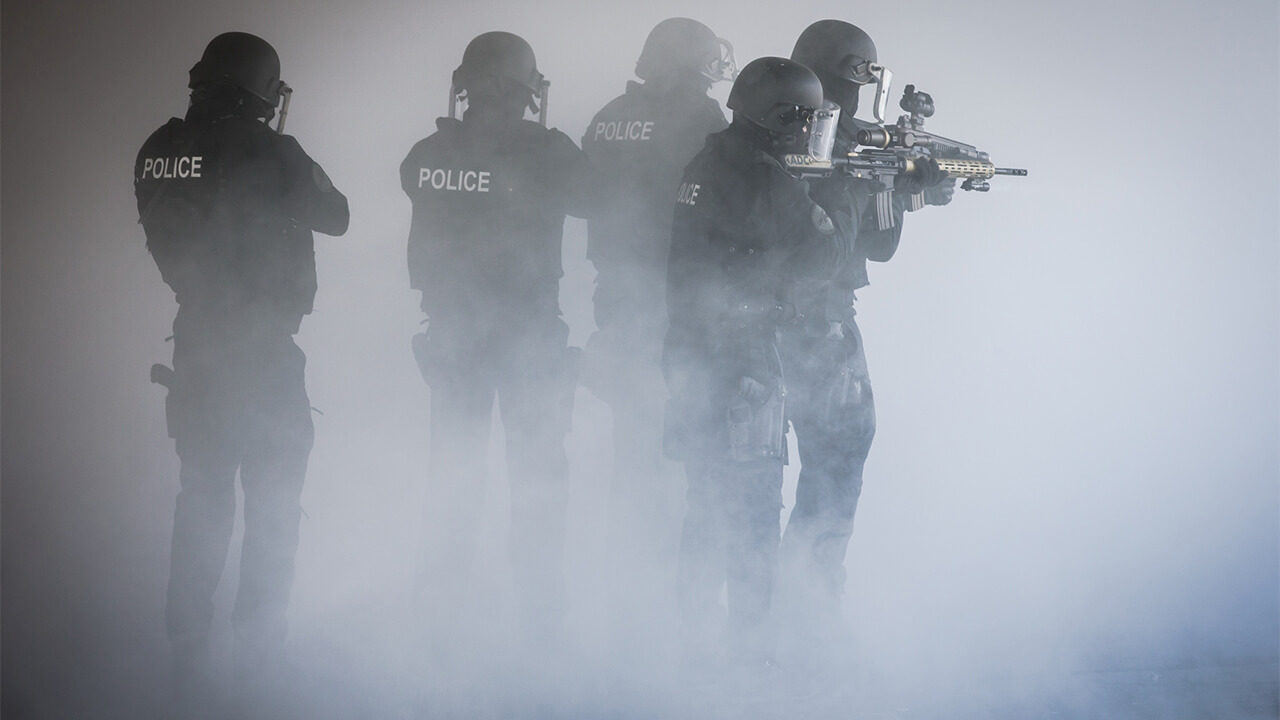 In the image above you can see members of a police SF unit in a low-light environment. They are wearing a reflective patch on their plate carriers, making their identity as law enforcement officers plain to the naked eye. 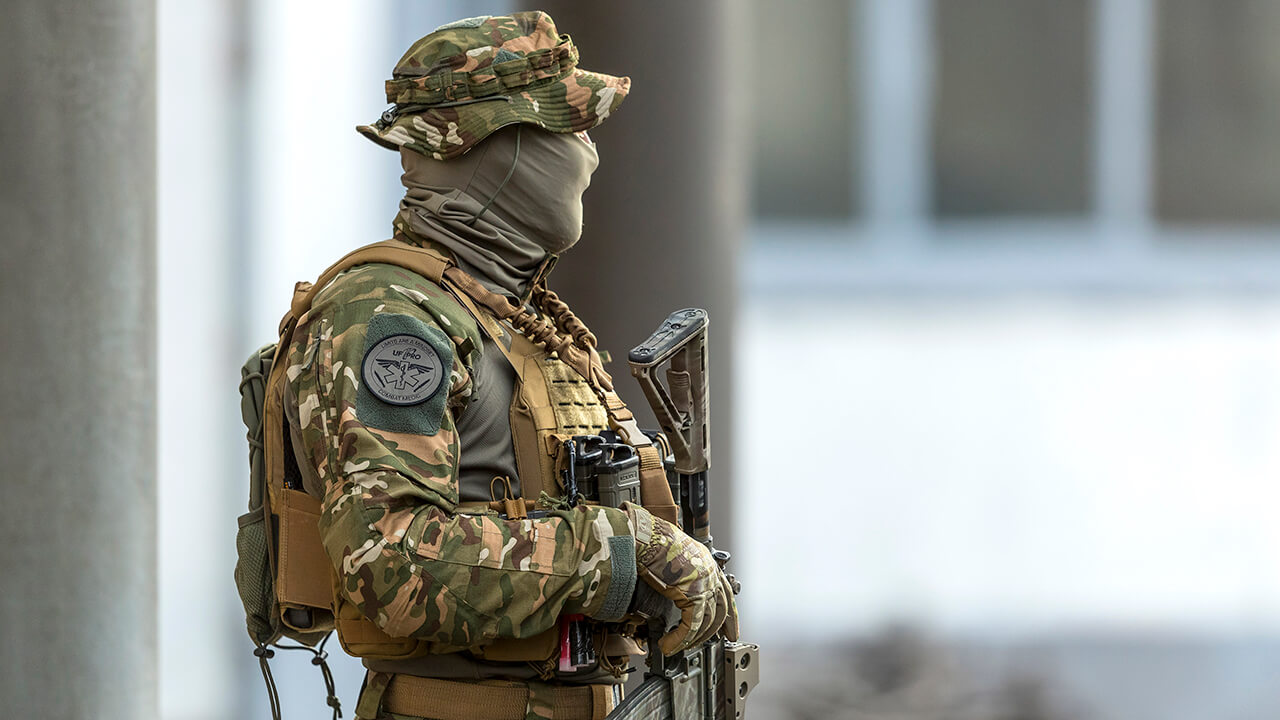 In addition to other patches, operators also routinely wear those that convey information. In this category we can include:

Tactical Velcro patches have over the years made a big leap in terms of the materials from which they’re made and the information they can hold. They have become a great solution to common problems in the field. They have gained phenomenal popularity in the civilian world.

Clearly, Tactical Velcro patches are here to stay for the foreseeable future. 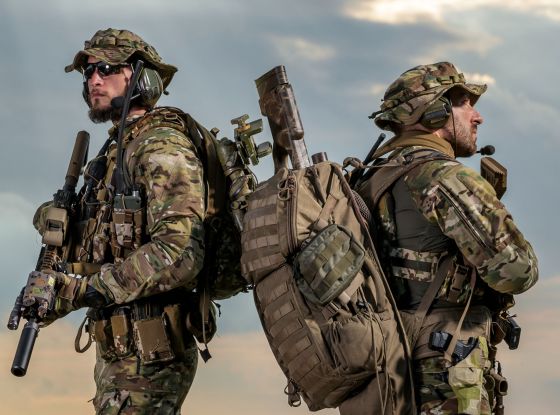 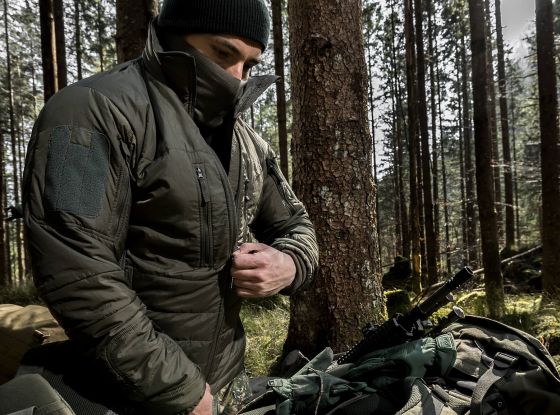