A camouflage pattern is good only to the extent that it thwarts detection in whatever surroundings you happen to be in. CONCAMO does exactly that—and it keeps you concealed over various distances, even if advanced technologies such as infrared scanning are used in the attempt to spot you.

The concept of concealment in the field is as old as humankind, but camouflaged uniforms didn’t really become a thing until the mid-18th Century.

Since then, camouflage patterns have come a long way.

Where once camouflage garments consisted of just a single colour, now we have printed patterns incorporating as many potential mixes of hues and gradations and shapes as there are situations and environments where you might need to keep yourself hidden from view.

And because this is the 21st Century, camouflage often now includes shielding from “eyes” operating outside the spectrum of human vision.

Most notably the IR concealment and incorporation of CADPAT fabrics, which are well suited to mask you from enemy radars or NVGs. 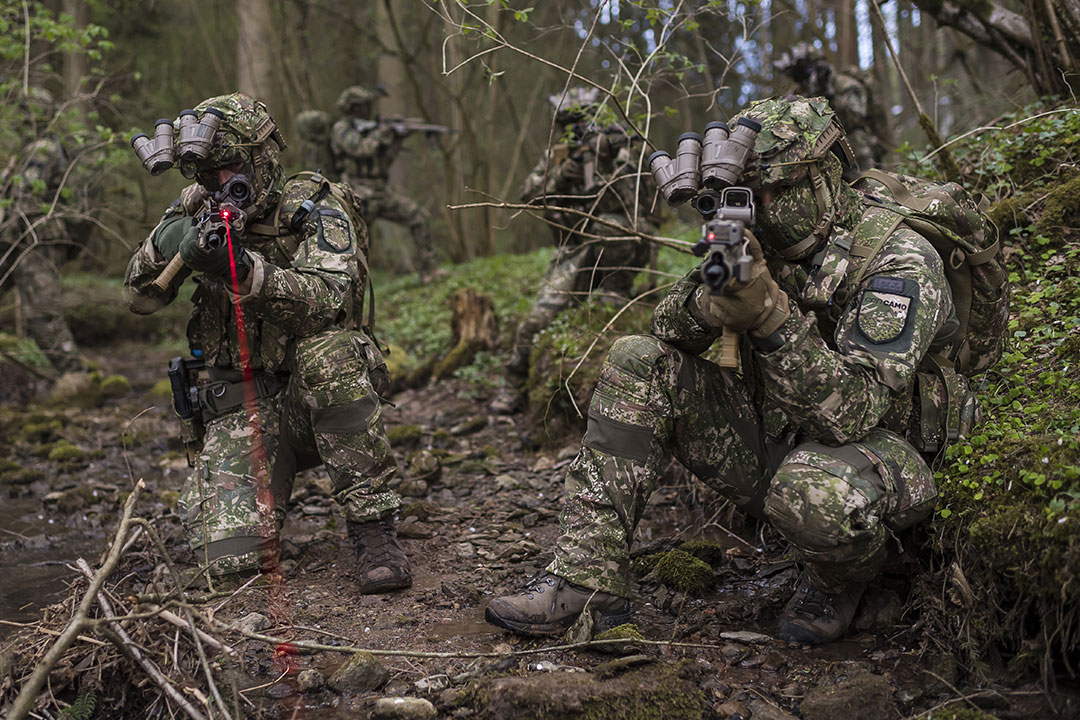 The goal is the same now as then: to enable you to effectively become one with your surroundings so that someone or something looking for you never succeeds at discovering your hiding place.

Enter CONCAMO. Does it work? In what ways, if any, is it an improvement over what existed before?

Is it the one that finally proves wrong the long-held belief that “a good camo pattern is always a compromise?”

CONCAMO is the creation of Germany’s Matthias Bürgin, a camouflage expert who served for many years in the German Military.

Bürgin developed CONCAMO in response to his belief that no pattern then available on the market was good enough for professional users.

So, he set about to design a new pattern, one based on the principles of perceptual psychology (that’s a subfield of cognitive psychology, which seeks to understand how the human eye and brain work together to make sense of things seen). 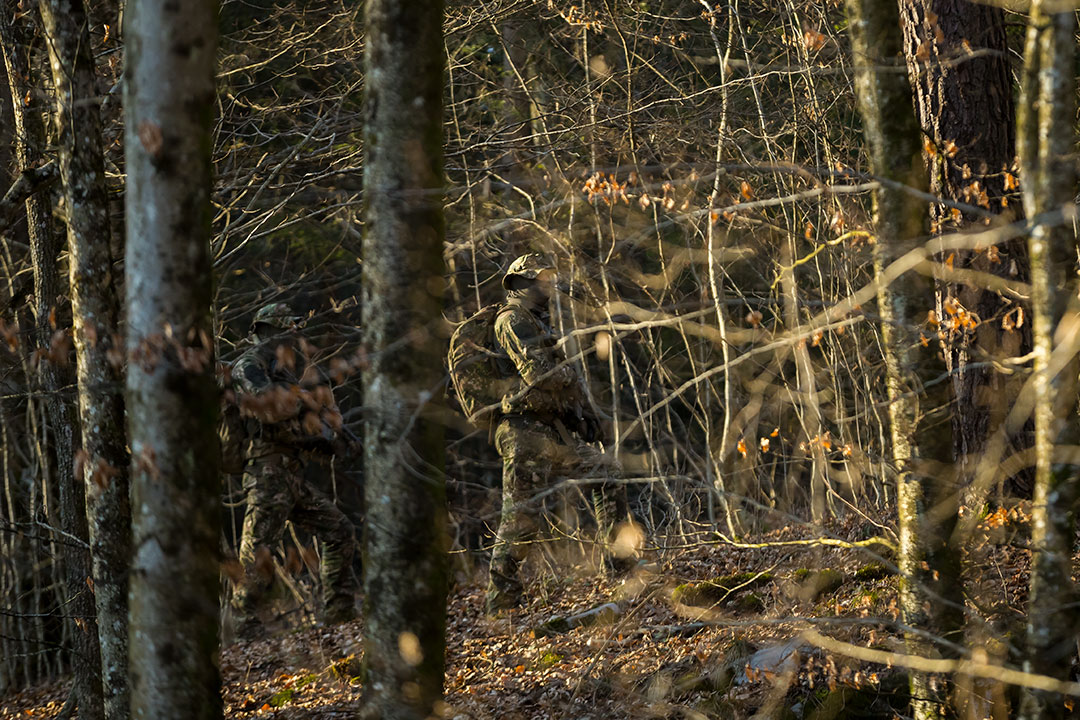 His idea was that by applying perceptual psychology principles to a camouflage pattern it should be possible to completely trick the subconscious mind into interpreting the outlines of a hidden person as something other than a disruption of the environment into which that person has inserted himself.

In other words, the pattern he devised creates an illusion of non-presence.

It does this using naturally occurring shapes and colours, all of which Bürgin had over the course of many years meticulously studied, catalogued, and evaluated.

To top it all off, CONCAMO is printed in a special ink that reduces the body’s infrared signature.

This pattern is also highly focused on the advanced detection methods and ensures you stay hidden in the IR spectrum, by using infrared signature-reducing ink.

Take a look at all camouflage patterns available at UF PRO here.

For more intel about the creator & the CONCAMO pattern in this video.

Matthias Bürgin brought to his CONCAMO research-and-development work a lifelong fascination with camouflage in nature.

At a young age, he studied the camouflage patterns of insects, reptiles, and mammals.

When he was 10, Bürgin began building model tanks, which he painted with camo patterns conceived in his imaginative mind

He was a highly competitive player of the game hide-and-seek—which was why, at the age of 12, he fashioned a Ghillie suit to give himself a winning edge. 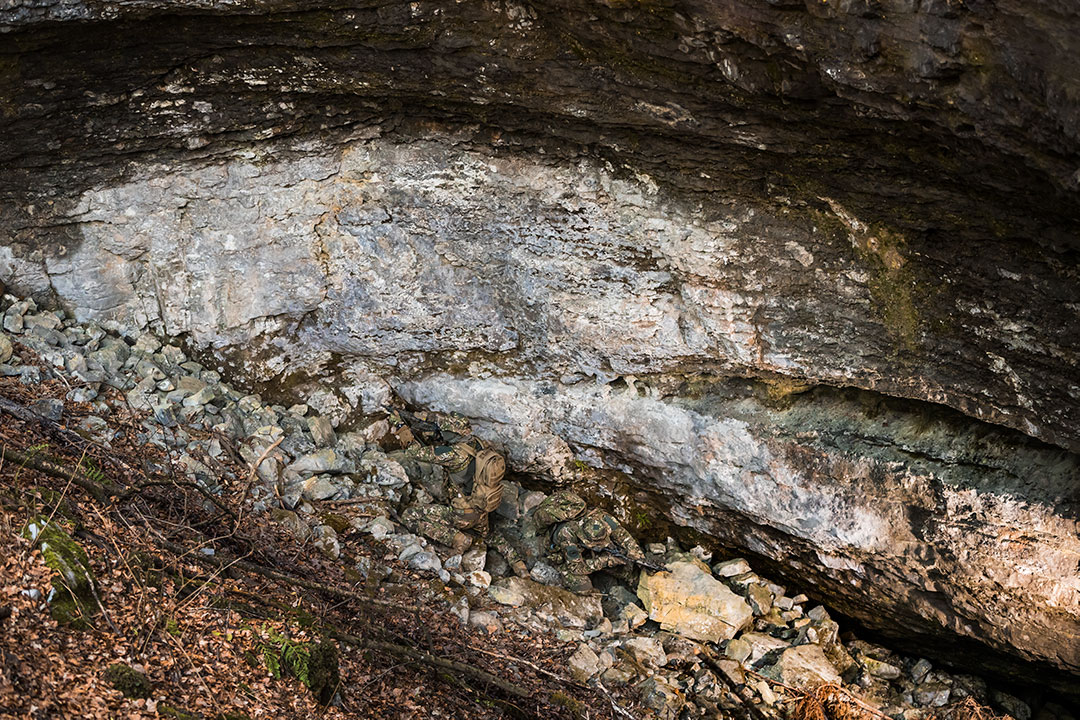 Throughout his teenage years, Bürgin experimented with camouflage patterns and greatly increased his knowledge of the art of tactical concealment.

Upon joining the German army, the military service gave him the opportunity to put his knowledge to use while also deepening it.

The first CONCAMO pattern was designed in 1992. The pattern has undergone numerous iterations since then, each better than the one before it.

Today's version continues to incorporate elements of the original design.

Notably, Bürgin designed CONCAMO without the aid of a computer generated pattern.

To achieve the results he wanted, Bürgin invested hours studying the varieties and intricacies of shapes as they exist in nature. 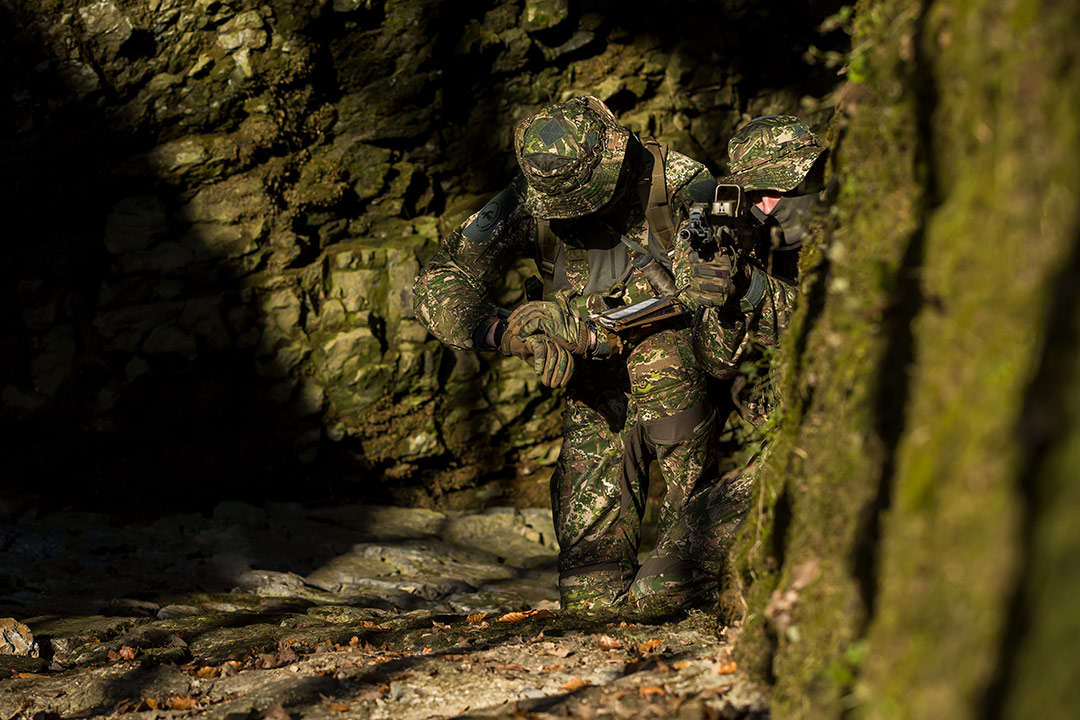 As earlier alluded in this post, the human eye records everything it sees and then passes this information on to the subconscious mind where it is filtered before continuing to the conscious mind.

However, the subconscious only sends to the conscious mind information about things that are conspicuous.

Bürgin’s innovation has the effect of preventing the subconscious mind from finding anything conspicuous in the information conveyed by gazing at CONCAMO.

As a result, the conscious mind remains unaware that a person is hiding nearby.

Where does CONCAMO work best?

Currently there are two available versions of CONCAMO. Each is designed for a specific environment or set of environmental conditions.

CONCAMO GREEN is ideal for areas with an abundance of greens and browns, such as a woodland. The name might have “green” in it, but the pattern is a mix of eight pigments.

Combined with its 25 levels of large and small asymmetrical shapes, CONCAMO GREEN forms a pattern that produces 60 layers of perceivable depth.

Seen at close range, this renders the pattern unobtrusive.

Viewed from afar, it takes on the appearance of the surrounding landscape. 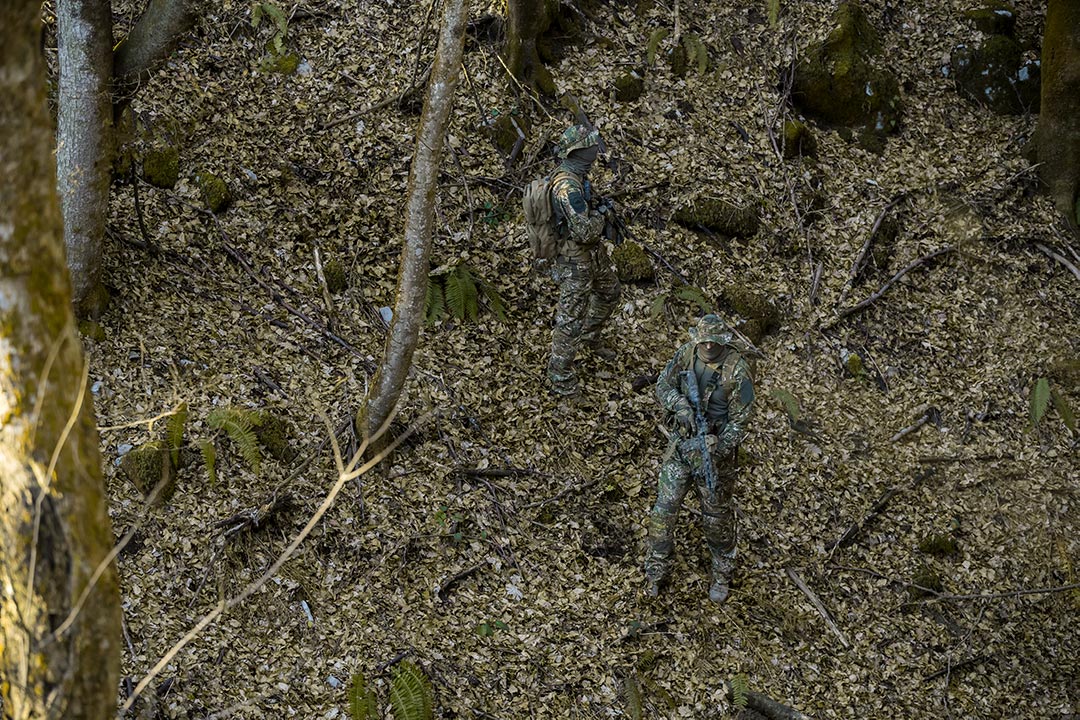 If you happen to be wearing this pattern, its mix of brown and green tricks the other guy’s subconscious into matching either of those two main colours with the tones in the background.

The result is you figuratively vanish into the landscape.

CONCAMO BROWN works the same way and in fact uses the same elements to achieve its effect.

The big difference is this pattern switches up the colours to emphasize more of the brownish spectrum.

Thus, CONCAMO BROWN is most useful in forests during fall and winter, as well as in drylands swept by reddish tones.

But, as with any technology, it must continue improving or risk becoming obsolete.

So far, the makers of CONCAMO have done a good job keeping the pattern above current standards.

Reconnaissance nowadays is conducted most frequently by optronic devices, which have become quite proficient at spotting wearers of conventional camouflage (since those patterns often suffer from inadequate IR protection).

The makers of are also talking about the possibility of one day soon bringing this remarkable pattern to vehicles in some variation that is based on CONCAMO.

However, for the immediate future—and certainly beyond—CONCAMO will remain primarily focused on use by military and special forces personnel. 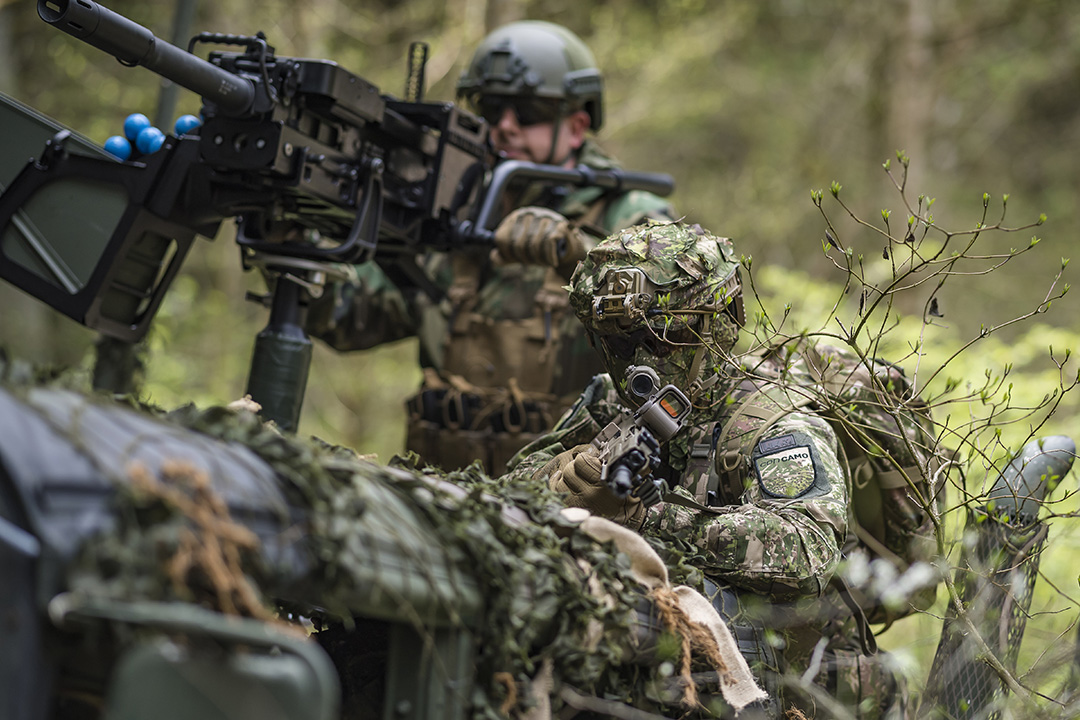 We are of the opinion that CONCAMO is an outstanding camouflage pattern.

It’s not claiming to be a universal pattern that goes everywhere and does everything.

Rather, it’s designed for specific applications in specific environments.

CONCAMO is an acknowledgement that nature exists in too many colours and contours for any single pattern to cover all the bases.

Importantly, from our vantage point as sellers of advanced-tech tactical clothing and accessories, it is evident that CONCAMO deserves a place in the hall of camouflage fame for many reasons, not the least of which is that it strives to be the best within its own niche.

This is a well-conceived and adeptly designed pattern that has history on its side and has been subjected to seemingly endless hours of field testing.

Based on all these factors, we feel confident about recommending CONCAMO for your consideration the next time you’re preparing to upgrade your gear.

To read more about CONCAMO and its creator visit concamo.com. 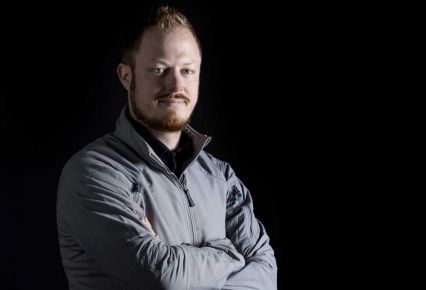