BDU stands for Battle Dress Uniform. A BDU is the garment worn by armed forces personnel during active duty and while undertaking combat missions. A BDU is not the same as an ASU, which stands for Army Service Uniform and which generally is worn for parades and formal functions.

The first use of military camouflage traces back to the mid-18th Century. At that time, a relative handful of musketmen were informally issued green uniforms to help them be less conspicuous as they moved through and took up positions in woodlands and grassy areas. Later, drab colours were added to those uniforms. Italy is credited as the first nation to formally issue camouflage military clothing, but it was Germany in the years before World War II that led the world in the science-based development of camouflage clothing. 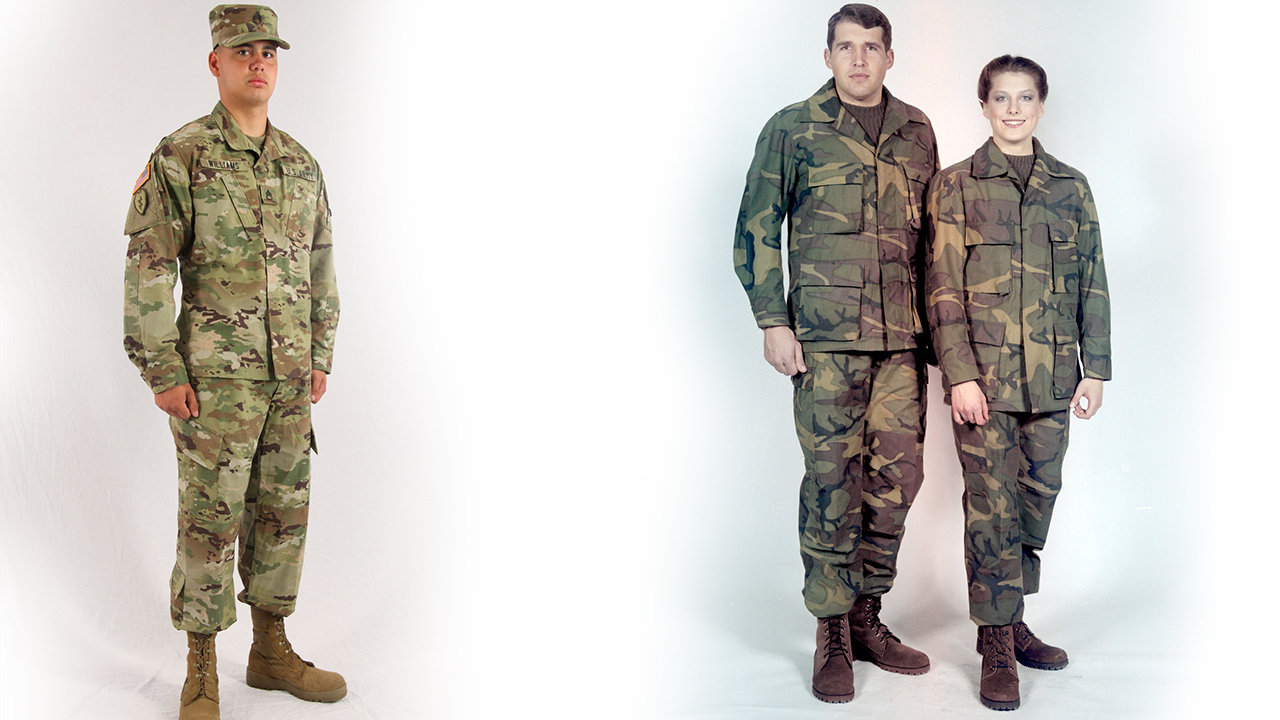 In the United States, the first military camouflage pattern was introduced in 1942. Six years later, the U.S. rolled out what was called “The Leaf Pattern,” a product of its Engineer Research and Development Laboratories (ERDL). However, Leaf Pattern camouflage (also known as “The ERDL Pattern”) was kept on the shelf and went unused until its issuance in 1967 to elite troops fighting in Vietnam.

Until 1981, American soldiers customarily wore monocolour combat uniforms. The lone colour was olive drab. That year, the U.S. military introduced the BDU, the first iteration of which was bedecked in a four-colour woodland pattern. Printed with infrared-brightened dyes (to help prevent detection by enemy combatants equipped with near-infrared image converters), this BDU was a direct descendant of the tropical combat uniform that came into wide use during the Vietnam War and that bore design similarities to the uniform of World War II-era U.S. paratroopers.

“Battle Dress Uniform” was the official name given to the combat uniform worn by U.S. armed forces personnel from 1981 to 2008. It was supplanted by the ACU (Army Combat Uniform) which remains in use by the American military to this day. However, the abbreviation “BDU” is still used as an unofficial term meaning any combat uniform.

Although the ACU eventually replaced the BDU as U.S. standard-issue, the concept of the BDU lived on. BDU-style garments and the camouflage patterns for them (as well as their associated pieces of gear) continued to be produced. Over the past two decades, BDUs and BDU camouflage patterns evolved into the highly effective products they are today, thanks to advanced digital technologies and innovative materials and designs.

To the casual observer, an ACU looks very much like a BDU. Is there any difference between them, you might ask? The answer is yes. The Battle Dress Uniform is distinguished from the Army Combat Uniform mainly by its design features. 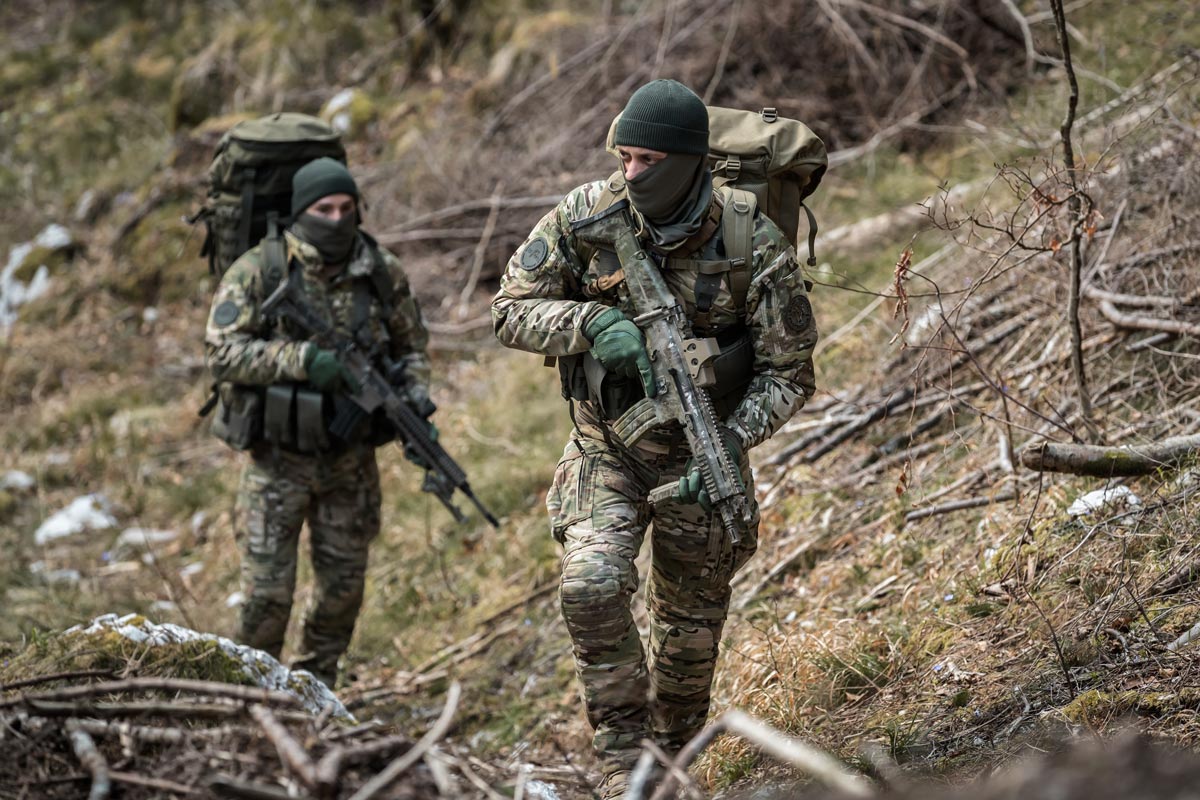 Different environments and conditions call for different camouflage. Below is a breakdown of some of our favourite camo patterns (for a deeper dive into the topic of camouflage, be sure to check out this article).

MultiCam ranks as one of the most versatile camouflage patterns of all. Its high-tech pattern shapes and sizes combined with a unique colour profile excel at disrupting both the wearer’s visual silhouette and near-IR signature.

MultiCam is effective practically everywhere: in varying environments, during different seasons, at high or low elevations, and under a range of lighting conditions. Small wonder MultiCam is the top choice of military, special operations units/forces, law enforcement, and elite forces globally.

The name Flecktarn (also known as Flecktarnmuster or Fleckentarn) derives from two German words, fleck and tarnung, which, together, translate as “spotted camouflage.”

Flecktarn is the official camouflage pattern of the Bundeswehr German Army and is widely recognised across Europe. This concealment system offers excellent visual disruption properties matching the colours of central European forests, which makes it most effective in temperate woodland areas.

There are five variants of the MultiCam pattern – in addition to regular MultiCam, there is also MultiCam Alpine, MultiCam Tropic, MultiCam Arid, and MultiCam Black. That last one is our favourite because it’s an ideal choice for operations in low light and at night.

In fact, it’s vastly superior to plain black clothing worn after the sun goes down and the stars come out. During the night, MultiCam Black maximises concealment from hostiles outfitted with NVGs and other high-tech equipment (like NVE). It also makes you harder to spot when flashlights are shined in your direction or when there’s a full moon out.

For these reasons, MultiCam Black has emerged as the go-to pattern among top-tier military and law enforcement units. And for one additional reason: MultiCam Black looks great when not being used for concealment. Out in the open, it gives wearers a distinctive look that commands greater authority than ordinary solid black.

SloCam stands for “Slovenian Camouflage.” It’s officially known as M12. Initially, SloCam was used by NATO-partnered Special Operations Forces. Having proved itself over and over, SloCam now earns praise as one of the finest concealment systems on the market.

SloCam consists of a mix of olive-green and brown-green shades that are extremely well-suited for concealment in a wide range of vegetation environments. Those colours combined with the pattern’s unique shapes enable SloCam to maintain visual disruption even at longer distances. 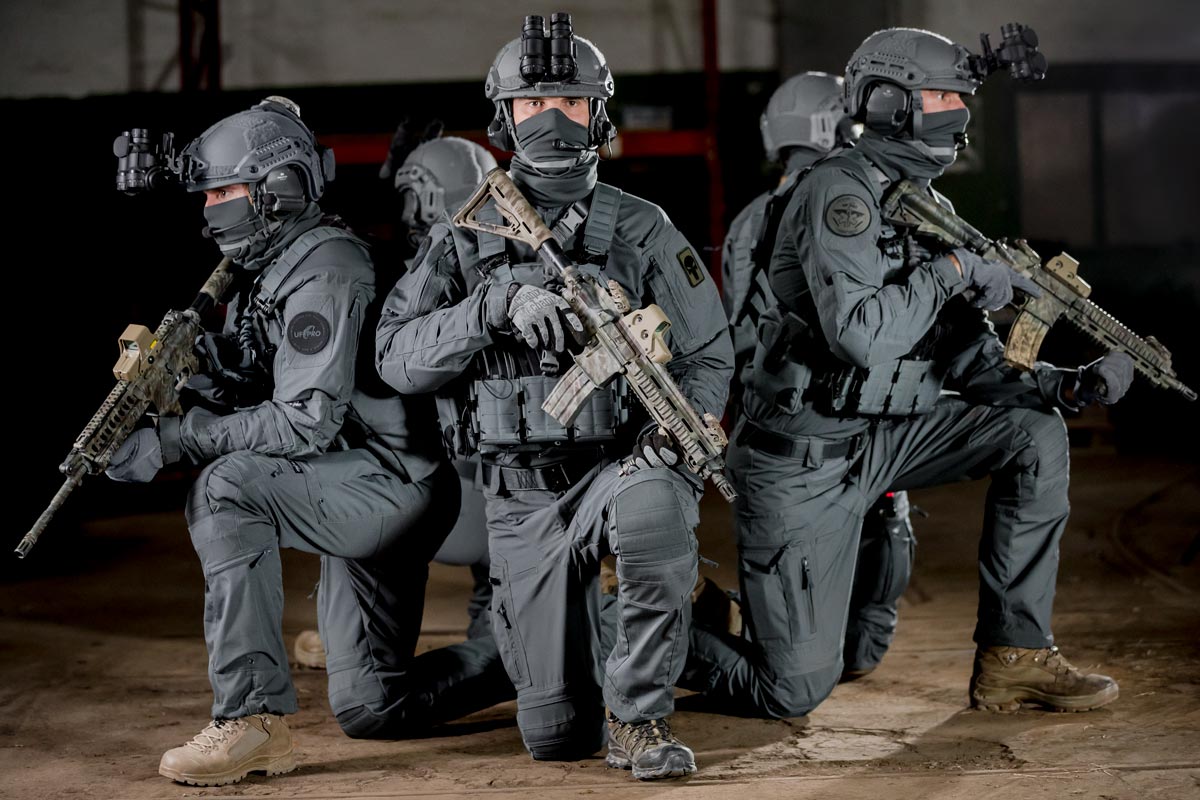 The 20th and 21st centuries bore witness to tremendous growth in the design of BDU camouflage patterns. However, that growth did not spell the demise of solid-colour BDUs. Those are still going strong, and for good reason: they’re preferred by police forces and tactical operators.

Police and tactical operators favour solid colors because they have no desire to hide. They want to stand out and they want the public to respect their authority. There’s simply no way to not see and not fear a police officer or tactical operator attired in a solid-colour BDU.

Navy blue BDUs date back to the 1700s. Sailors chose navy blue as their go-to colour for seemingly no other explanation than it looked good on them. Today, navy blue is also worn by police, medics, and specialized tactical operators keen to convey a crisply professional image.

There’s something about black uniforms, and that something is respect and authority. Accordingly, black BDUs are the preferred choice of Special Units personnel who want to stand out from their fellow servicemembers in other units and to push psychological warfare to the limit.

For more than 100 years, Brown Grey has been a staple colour worldwide when it comes to tactical clothing. Also known as Ranger Green and RAL 7013, Brown Grey BDU is extremely versatile and effective in arid, urban, or woodland environments.

Steel Grey is a fairly new colour in the tactical clothing industry and is especially effective in urban environments dominated by concrete buildings. Steel Grey BDUs also help operators keep a low profile when they want to easily blend in with city crowds. 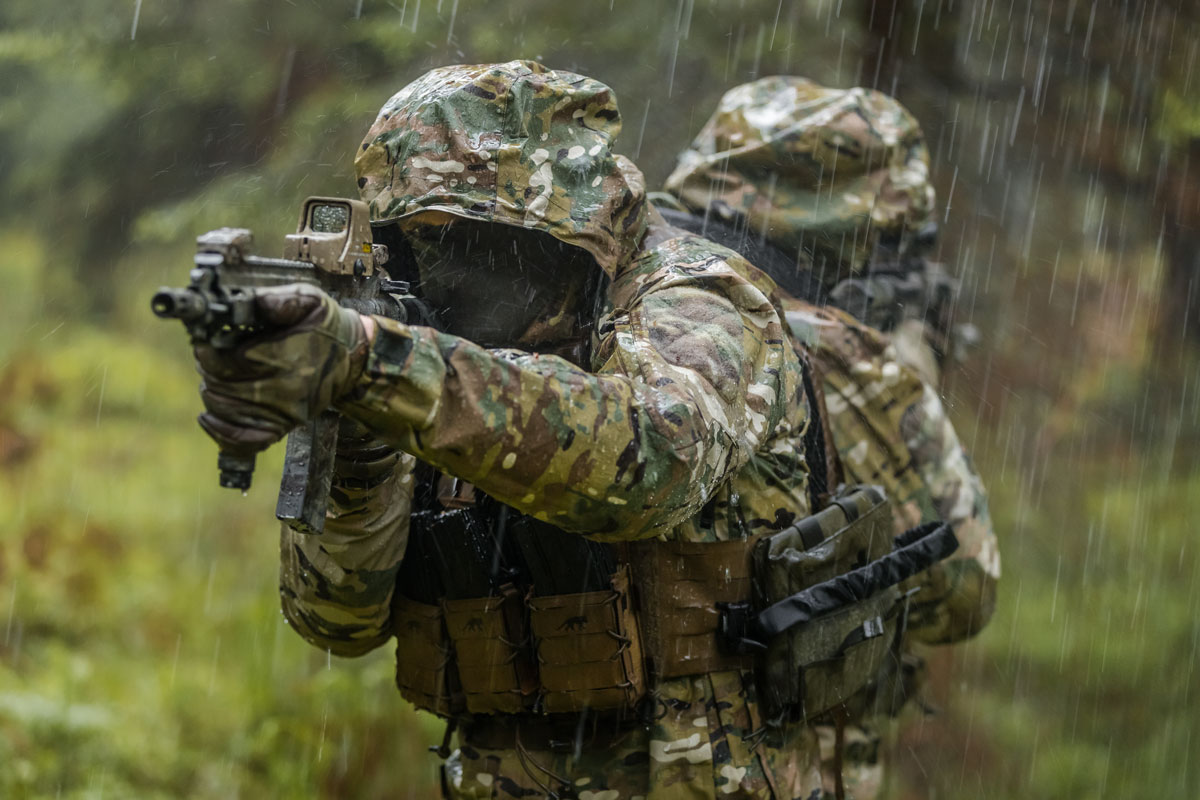 BDUs are practical garments, designed to permit freedom of movement and accomdate a wide range of body shapes. That’s why the original fatigue shirts were blousy and the pants baggy, and why both came with an abundance of pockets.

The shortcoming of the original BDU was its narrow range of garment styles and features. But, in the end, that mattered not because this first-generation BDU served as a great foundation for the development of vastly better tactical and combat clothing. Now we have military clothing that offers outstanding design, performance, comfort, and durability.

At UF PRO, our contribution to this evolution is the Striker BDU. We’ve poured our hearts and souls into the Striker BDU line, perfecting it for optimal functionality, wearability, and life. From  cutting-edge materials to bespoke features like our air/pac® pads and the Waist/Flex and Hood/Harness® systems, the UF PRO Striker BDU embodies innovation that has gained the hard-won trust of special forces units around the globe.

We developed the Striker BDU line to meet the needs of operatives in the field, with an emphasis not just on functionality and performance but also on comfort and high-end design solutions to help you accomplish even the most challenging missions under extraordinarily difficult conditions.

UF PRO Striker BDU pants are lightyears ahead of the original BDU woodland camo pants. They provide nearly unlimited range of motion and come in an array of camo patterns and solid colour options.

Comfort, performance, and durability were all equally important considerations when we designed the fit of our combat pants. We achieved an ergonomic fit in part by making intelligent use of robust stretch materials that allow you to move freely when you run, kneel, jump, or duck, even when your pockets (of which there are plenty for keeping your essential gear at your fingertips) are stuffed to the brim.

No matter if your mission calls for BDU pants in black or camo, the Striker line gives you plenty of options from which to choose from.

UF PRO Combat Shirts are constructed from the finest materials. Their functional elements are designed to work hand-in-hand with your other gear. Some of these shirts are built to keep you comfortable and on top of your game in scorching hot sun, while others do the same but in sub-zero temperatures. They make an outstanding choice whether used as a functional base-layer or as a purely tactical shirt.

The original BDU didn’t come with a jacket. In this day and age, an exclusion like that is inconceivable because a jacket is crucial for operational success in damp, windy, or cold environments.

UF PRO offers an impressive range of tactical and combat jackets for those conditions and more. There’s almost surely one that’s right for your mission needs.

Our combat jackets are built for specific environments. Get the Delta Tactical Winter Jacket to stay warm in sub-zero temperatures. Opt for the Monsoon Rain Jacket to shrug off heavy downpours.

Helmets are routinely worn on risk-laden missions, but combat hats and caps are also a viable choice owing to the high degree of comfort and performance they provide.

The UF PRO Striker Boonie Hat is a lightweight piece of headgear that offers excellent protection from the sun. Its design permits air to refreshingly circulate under the dome. And the camo pattern helps you further blend in with the surroundings.

No uniform is complete without accessories to enhance its functionality, versatility, and practicality. Molle pouches, for instance, let you carry extra gear. Knee and Elbow pads, meanwhile, will do wonders for protecting your joints from pain and injury. 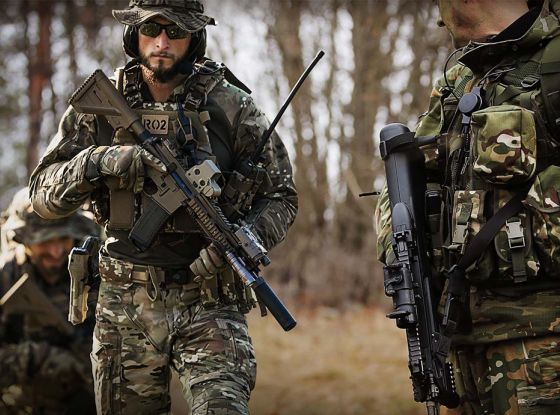 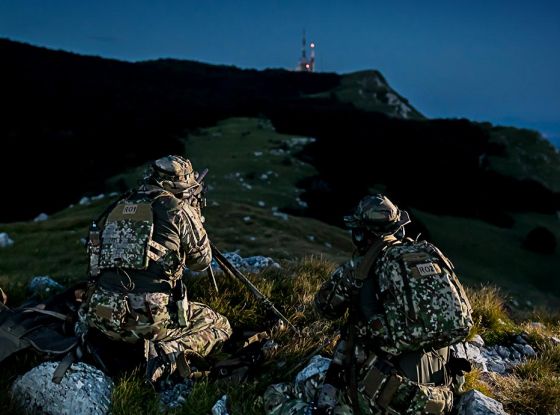 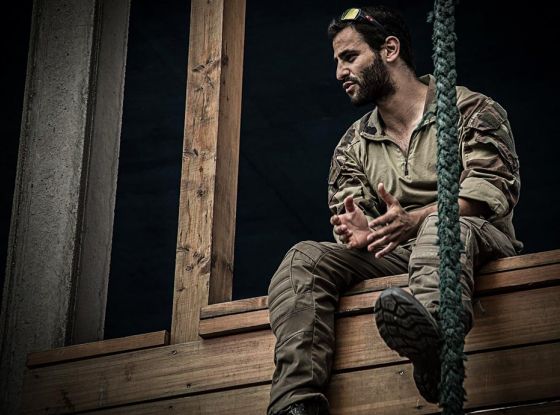