The day will arrive when you’re called on to defend your country, protect your community, or save an individual life. When that call comes, the only way you’re going to be able to answer is if you’re tactically fit.

Without doubt, your level of tactical fitness may very well determine whether you and others make it home safe.

What is tactical fitness?

Tactical fitness is defined as the physical ability to perform your military, police, or firefighter job. But it’s not about workouts. It’s about work.

To be considered tactically fit, you need to be able to run, swim, and carry heavy equipment a considerable distance, accurately shoot when tired or under pressure and rescue your buddy. And you need to be able to go that distance without halfway there gasping for air or feeling like every muscle in your body is coated with battery acid.

However, tactical fitness training is not about working out for the sake of getting good at working out. It is about developing your strength, your fitness, and your ability to react as you have been trained to react when the shit hits the fan. It’s about being equipped to think clearly under stress so you can maintain your focus and shooting accuracy. It’s about performing in the real world.

It’s a necessary element of your tactical training.

Why is tactical fitness training important?

Imagine having to run 200 yards across a mall to get close enough to an active shooter and open fire on him. Not until you’re maybe 25 yards away are you able to draw a bead on him. But you’re huffing and puffing and unsteady because you’re not tactically fit.

In that condition do you feel confident you can, from that distance, hit the shooter and not an innocent bystander?

It's one thing to shoot while on the flat range, rested and calm and facing no stress. In that circumstance you’re practically guaranteed accuracy. But it's something else entirely when you shoot while fatigued and under extreme stress brought on in part by needing to nail that shot amid a scene of utter chaos. In that scenario, your accuracy is no longer assured.

Tactical fitness training prepares and conditions you to perform at your best in the field and in real-world situations when events force you out of your comfort zone. 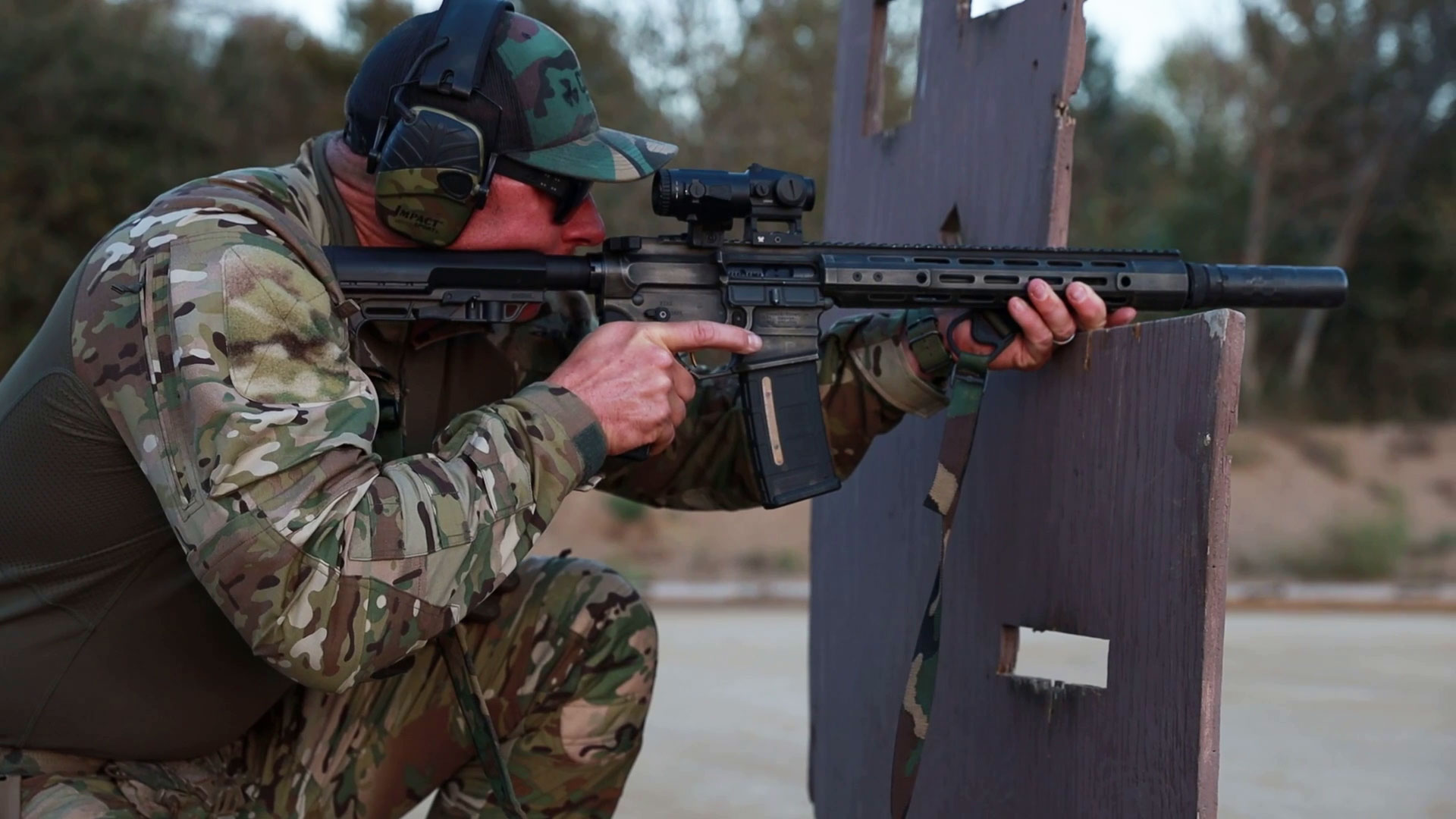 Here’s what usually happens when you’re not tactically fit.

You draw your weapon and try to aim it, but your arms are weak and shaking like Jell-O gelatin because of the exhausting activity you just finished putting them through. You might hit the target. Or you might miss. You’ll probably miss because, on top of the muscle fatigue, you’ve also got mental stress amped up sky high by the mayhem all around you.

In contrast, here’s what usually happens when you’re tactically fit.

Your arms are strong and rock steady. Your mind is cool, calm, collected, and laser focused despite the unfolding scene of terror. You draw your weapon, find the target, squeeze the trigger, and the threat is instantly pacified with no collateral damage incurred.

If you’re a military, law enforcement, or security operative, or someone working in a related field, you must be tactically fit. You must be able to fully utilize your tactical firearms training whenever called upon by circumstances.

The tactical fitness program described below will help you reach that level of fitness. It was designed by the former SWAT team members to help you be a better operative tomorrow than you are today.

The best place to perform the program’s exercises is in a tactical gym like the one shown in this video which walks you through the tactical exercises:

You’ll need a sparring partner for this part of the tactical fitness program. Iron Infidel recommends you mix it up with someone who is bigger and heavier than you.

In this exercise, you’re going to spend about a minute trying to take down your opponent. Because he’s beefier than you, expect to fail. But that’s okay. The purpose is to tire you out, to induce fatigue.

Why? Because in a real-life engagement with a bad guy you’re going to head into that encounter with at least some degree of exhaustion. Grappling with a sparring partner is a great way to tire you enough for the other exercises in this tactical workout to really benefit you (it’s also a great way to build your body strength and train your combat skills in general).

A word to the wise, though.

In a real-life situation, try not to get into a grappling contest with the bad guy. For one, he might be stronger and better trained than you (meaning you’re more likely to lose the fight). For another, you need to stay far enough away from him so that you can most advantageously use the other skills in your retinue (like your tactical pistol training) and so be able to bring the encounter to a quick and safe conclusion.

If the bad guy is an active shooter and heavily armed, you might have to take your first crack at him from behind a barricade, such as an opened car door. In this exercise, select a barricade that will shield your body as you shoot from two positions: standing and kneeling.

Target shooting after getting fatigued in a hand to hand combat makes it clear how accurate you can expect to be in a real-life situation. 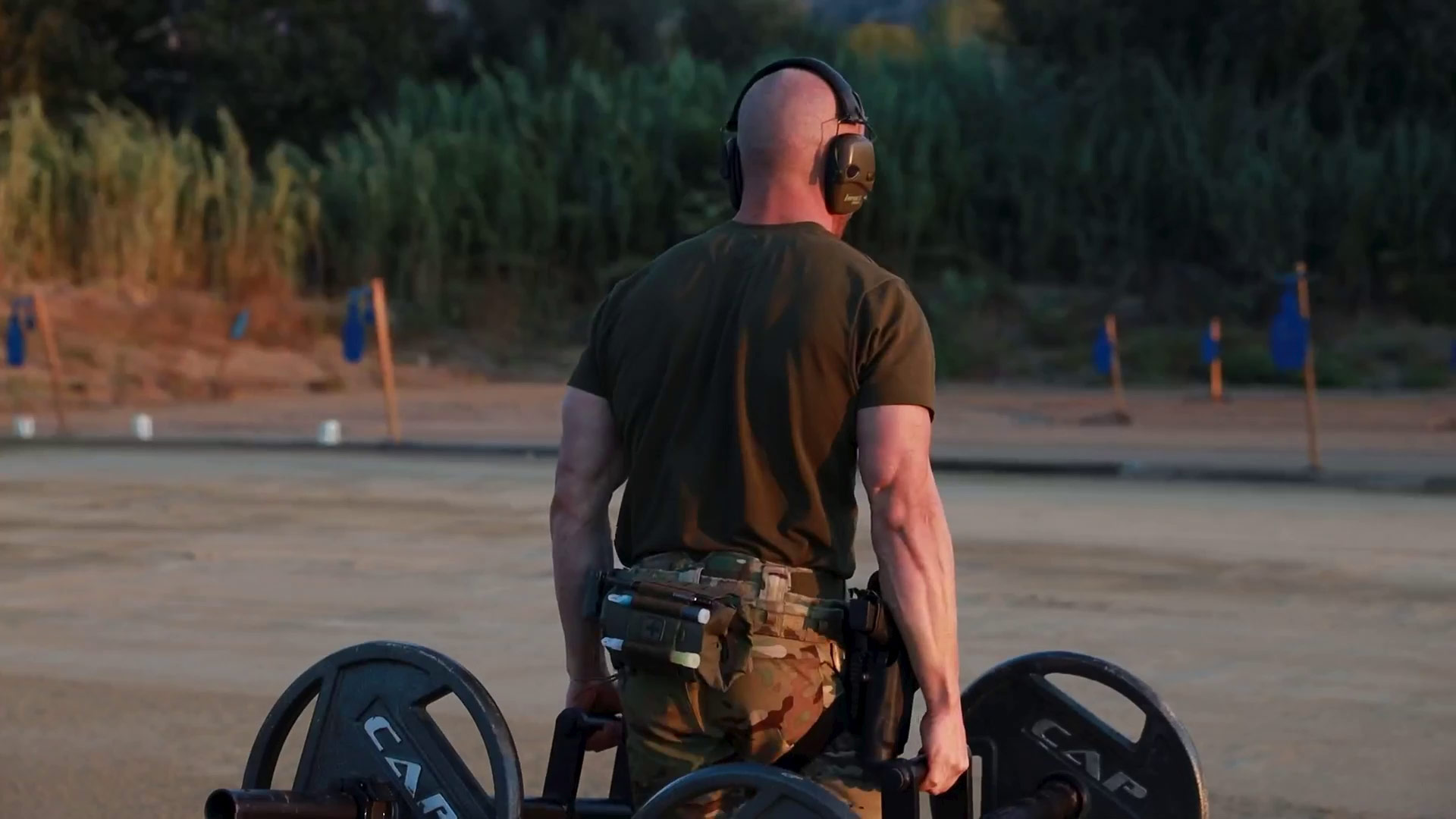 As soon as you’re done shooting from behind the barricade, put your rifle on safety and step over to a set of two farmer-walk barbells. Each bar plus plates should weigh about 115 pounds. Grip one of the bars with your right hand, the other with your left.

Keeping your arms straight down at your sides, you’re going to quickly walk in a straight line about 25 yards to a finish line you’ve marked on the ground beforehand. Put down the barbells upon reaching that finish line.

This exercise will severely tax your forearms and your grip. Next you’re going to do some tactical pistol training and will find it very difficult to land shots accurately because of how tired the farmer walk made your forearms. But it’s all good.

The more farmer-walk exercise you do, the stronger your forearms and grip will become. And the stronger they are, the more accurately you’ll shoot.

First, though, set up a target between the farmer-walk starting and finish lines. Let your partner decide when to surprise you with the command to take out the “threat.” At that command, drop the barbells and unholster your weapon. Take aim at the target and fire one round. Holster your weapon. Pick up the farmer-walk barbells and continue briskly walking toward the finish line. 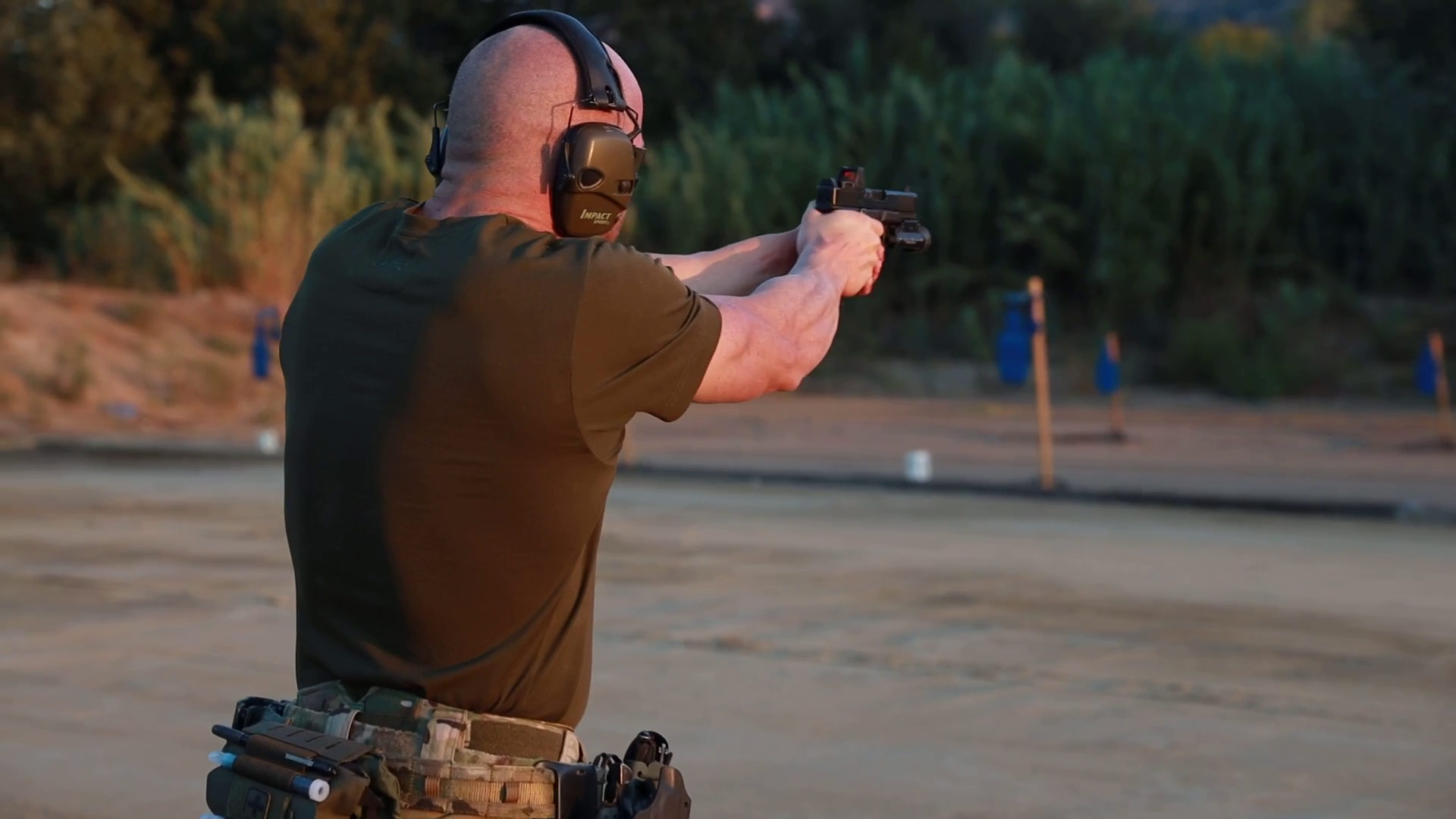 Further augment the farmer walk by adding a lateral run. After responding to the threat command and reaching the finish line, drop the barbells, and put two rounds into a target directly in front of you.

Then, with pistol still drawn, sprint 90 degrees (left or right, your choice). Run 10 to 20 yards, stop, turn to the side to face a second target, take aim, fire two rounds, and holster the gun.

The purpose of the lateral running exercise is to help train you to run from cover to cover. In a real-world shootout, you’ll find that an invaluable skill.

Finally, complete the tactical workout by having your sparring partner wait for you at the end of the lateral run so you can execute a fireman carry. To do this, hoist him up and across the back of your shoulders and carry him at a run to the starting line of the farmer walk. 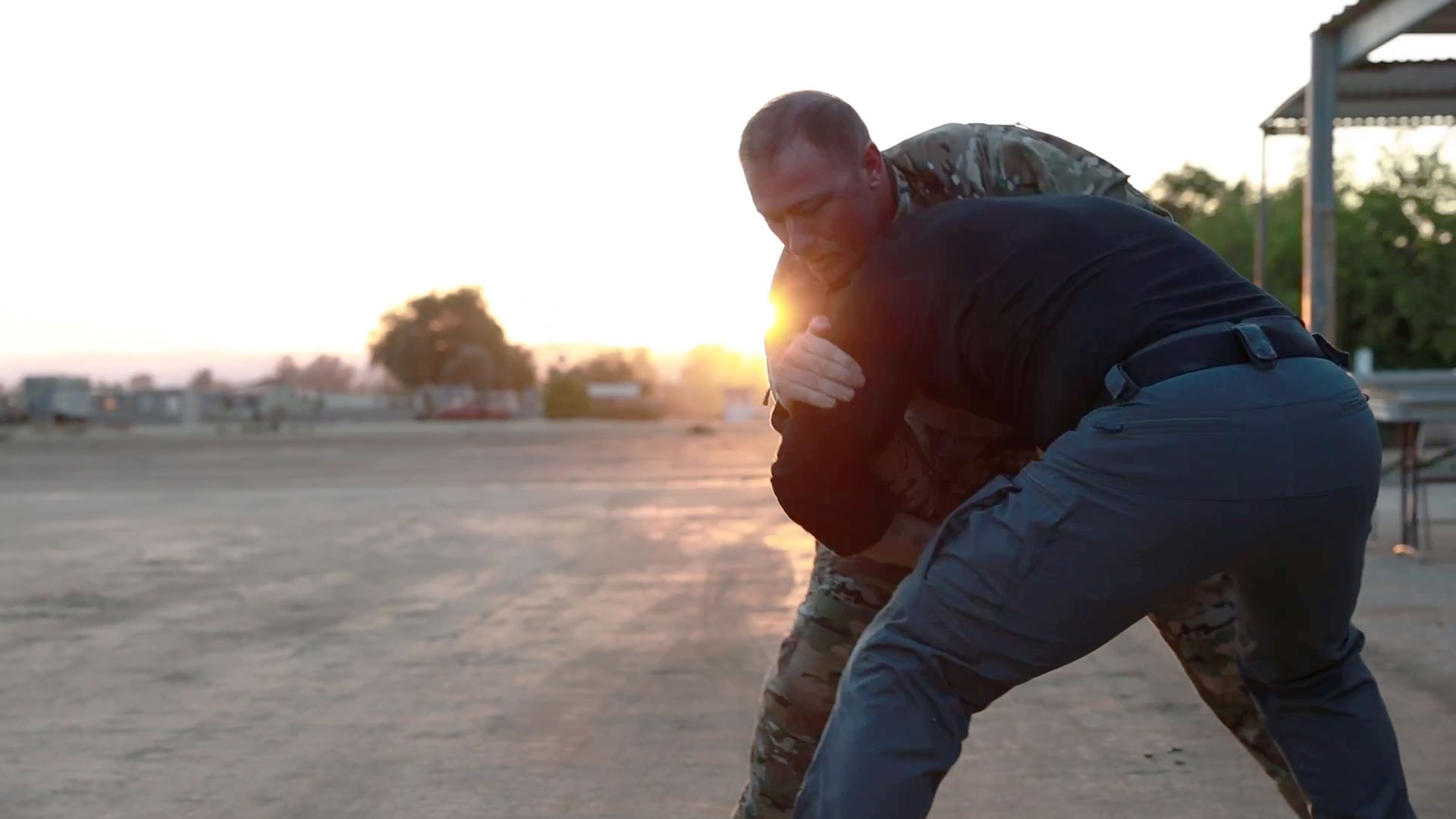 You never know when you’ll be called on to put your life on the line. But whenever the call comes, you’d better be physically and mentally able to respond to it.

The tactical workout exercises described above will help you develop your muscles and your mind so you can handle the incredible stresses that go with confronting an active shooter. You’ll be able to optimally perform when placed in any other kind of danger-packed situation that carries you far outside your zone of comfort. Set up a tactical gym to do these exercises. Do them often and before you know it you’ll be tactically fit. 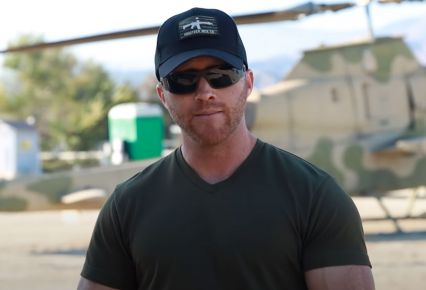 Ex-law enforcement and SWAT operator. Twelve years of field experience. Co-founder of Iron Infidel. Now an avid promoter of LE training. Keen about pushing you out of your comfort zone. 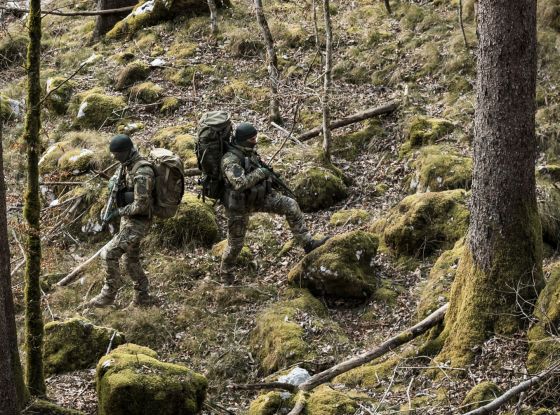 Hiding in plain sight: the science behind military camouflage

The Best Survival Jacket for Your Next Bushcraft Project 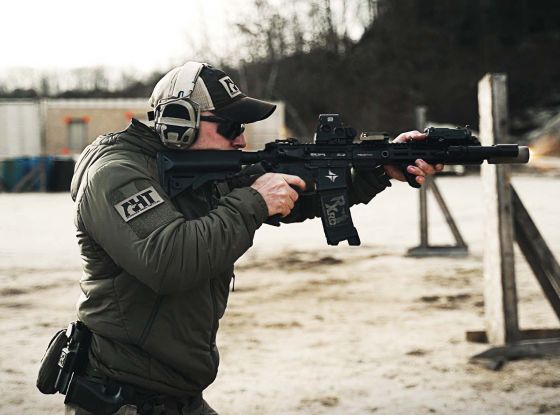